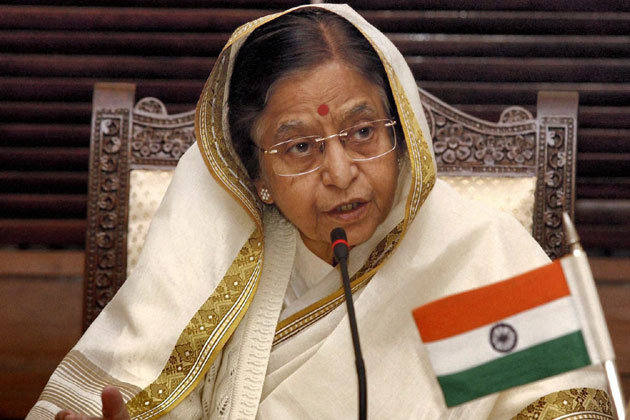 Pratibha Devisingh Patil  (born 19 December 1934) is an Indian politician who served as the 12th President of the Republic of India and was the first woman to hold the office. She was sworn in as President on 25 July 2007, succeeding Abdul Kalam and after defeating her rival Bhairon Singh Shekhawat. She retired from the office in July 2012. She was succeeded by Pranab Mukherjee as the 13th President

Pratibha Devisingh Patil is the daughter of Narayan Rao Patil. She was born on 19 December 1934 in the village of Nadgaon, in the Jalgaon district of Maharashtra, India. She was educated initially at RR Vidyalaya, Jalgaon and subsequently was awarded a Masters degree in Political Science and Economics by Mooljee Jetha College, Jalgaon, and then a Bachelor of Law degree by Government Law College, Mumbai. Patil then began to practice law at the Jalgaon District Court, while also taking interest in social issues such as improving the conditions faced by Indian women.

Patil married Devisingh Ransingh Shekhawat on 7 July 1965. The couple have a son and a daughter.

The BBC has described Patil's political career prior to assuming Presidential office as "long and largely low-key". In 1962, at the age of 27, she was elected to the Maharashtra Legislative Assembly for the Jalgaon[clarification needed] constituency. Thereafter she won in the Muktainagar (formerly Edlabad) constituency on four consecutive occasions between 1967 and 1985, before becoming a Member of Parliament in the Rajya Sabha between 1985 and 1990. In the 1991 elections for the 10th Lok Sabha, she was elected as a Member of Parliament representing the Amravati constituency. A period of retirement from politics followed later in that decade.

Patil had held various Cabinet portfolios during her period in the Maharashtra Legislative Assembly and she had also held official positions while in both the Rajya Sabha and Lok Sabha. In addition, she had been for some years the president of the Maharashtra Pradesh Congress Committee and also held office as Director of the National Federation of Urban Co-operative Banks and Credit Societies and as a Member of the Governing Council of the National Co-operative Union of India.
On 8 November 2004 she was appointed as the 24th Governor of Rajasthan and she was the first woman to hold that office, and, according to the BBC, was "a low-profile" incumbent.

The presidential role is largely that of a figurehead but it does potentially have greater significance, including that of overseeing the formation of a government in certain situations. The presidential electoral college consisted of around 4900 voters, being MPs and also legislators at state level who between them represented 1.09 million votes, and the selection of a candidate for election is usually arranged by consensus among the various political parties. Consequently, it is common that the candidate does not face a challenger.

On 14 June 2007, United Progressive Alliance (UPA), which was the ruling alliance of political parties in India, headed by the Indian National Congress, and the Indian Left nominated Patil as their candidate for the presidential election to be held in July that year. She emerged as a compromise candidate, being proposed by Sonia Gandhi, the UPA chairwoman, after the Left parties would not agree to the nomination of former Home Minister Shivraj Patil or Karan Singh. Patil had been loyal to the INC and the Nehru-Gandhi family for decades and this was considered to be a significant factor, although Patil said that she had no intention of being a "rubber-stamp president".

Contrary to the normal pattern of events, Patil faced a challenge in the 2007 presidential election. The BBC described the situation as "the latest casualty of the country's increasingly partisan politics and [it] highlights what is widely seen as an acute crisis of leadership". It "degenerated into unseemly mud slinging between the ruling party and the opposition". Her challenger was Bhairon Singh Shekhawat, the incumbent vice-president and a Bharatiya Janata Party (BJP) veteran. Shekhawat stood as an independent candidate and was supported by the National Democratic Alliance (NDA), a group led by the BJP, which had initially considered a legal challenge to Patil's candidature on the basis of media reports concerning alleged irregularities in her financial affairs. That basis of challenge was dropped after legal advice was obtained and the focus of opposition became characterised as one of morality.

Those opposed to Patil claimed that she lacked charisma, experience and ability. They also highlighted her time spent away from high-level politics and queried her belief in the supernatural when she claimed to have received a message from Dada Lekhraj, a dead guru, who told her than she would become president. Various specific issues were raised, such as a comment made by her in 1975 that those suffering from hereditary diseases should be sterilised. It was alleged that Patil had protected her brother, G. N. Patil, who had been named in connection with the Vishram Patil murder case,[clarification needed] while another alleged that as a Member of Parliament for Amravati between 1991 and 1996 Patil diverted Rs 36 lakh (Rs 3.6 million) from her MPLADS fund to a trust run by her husband Devisingh Shekhawat. This was in violation of Government rules which barred MPs from providing funds to organisations run by their relatives. The parliamentary affairs minister denied any wrongdoing on Patil's part, and noted that the funds utilized under MPLADS are audited by the Comptroller and Auditor General of India

The INC countered the various issues raised by claiming that in 1947, soon after India gained independence, Shekhawat had been briefly suspended from his police work for taking a bribe. The opposition denied this, and also the INC claim that he had been protecting his son, who had faced charges of illegally acquiring land. The gender of Patil and her interest in issues relating to Indian women were reported as positive attributes. The BBC noted her supporters' claim that her election would be "a landmark for women in a country where millions routinely face violence, discrimination and poverty", while Bloomberg summarised the opinion of the social activist Nafisa Ali as, "In India, where female infanticide is still common and women's representation in the lower house of parliament hasn't crossed 9 percent since independence in 1947, Patil's elevation is seen as a step toward greater empowerment of women." The INC had campaigned for Shekhawat to stand down from his challenge in order to allow a woman to be elected.

Bal Thackeray, the leader of the Maharashtra-based Shiv Sena (SS) party that had been allies with the BJP for 21 years, had announced that his party would break ranks with the NDA and support Patil rather than Shekhawat. This was in part because of her gender but also because SS desired to see the country have a Marathi president. Although he did not expect the decision to cause a more general split with the BJP, Thackeray said that if Kalam had been willing to stand for a second term then SS would have supported him. He also noted that Shekhawat's position as an independent candidate was a ploy by the BJP who, according to him, had realised that if Shekhawat stood as a BJP candidate then he would lose support.

Patil won the election held on 19 July 2007. She garnered nearly two-thirds of the votes and took office as India's first woman president on 25 July 2007.[citation needed]

Pratibha Patil's term as the President of India has seen various controversies.

During her term as president, Patil has commuted the death sentences of 35 petitioners to life, a record — among them are those convicted of mass murder, kidnapping, rape and killing of children. Presidential office, however, defended this by saying that the President had granted clemency to the petitioners after due consideration and examining the advice of the Home Ministry.

Ahead of demitting office, President Pratibha Patil has scored a new record. She has commuted the death sentence of as many as 35 convicts to life — among them are those convicted of mass murder, kidnapping, rape and killing of children.

On June 2, Patil gave her pardon to four more — Bandu Baburao Tidke from Karnataka, Buntu from Uttar Pradesh and Lalchand alias Laliya Dhoom and Shiv Lal from Rajasthan. As a swami of Sadashiva Appana Math, Bagalkot, Tidke abducted a 16-year-old schoolgirl, raped and murdered her. UP's Bantu, on death row since July 2008, was convicted of raping and killing a five-year-old girl.

An RTI disclosure has revealed that President Pratibha Patil has been allotted defence land, the size of which is six times more than she's eligible for, in Pune to construct a bungalow. President's office, however, said that the government's defence establishment owns the land. This is not the first time the President has found herself in a controversy. Presenting a list of the past controversies the President was involved in:

It came to light that President Pratibha Patil had spent Rs 205 crore on her foreign visits, highest so far by any President. Since assuming office since July 2007, Patil had undertaken 12 foreign trips to 22 countries across four continents.

President Pratibha Patil's son and Congress MLA from Amaravati Rajendra Sekhawat allegedly used his status as President's son to acquire a 532 sq m plot of land worth Rs 1.50 crore and in possession of the NCC, for a college run by Vidya Bharati Education Society (VBES), a charitable body, while he was the organisation's chairman.

Rajendra Shekhawat is accused of misusing President Pratibha Patil's position to consolidate his political base. President Patil inaugurated a flyover near Kondhali, 20 km from Amravati, on the Nagpur-Ahmedabad highway. The function was included in her official itinerary on the insistence of Shekhawat. Inauguration of a flyover is against the dignity of the President.

Rajni Patil, a professor at a Jalgaon college, claimed that Pratibha Patil's brother G N Patil was the person who had murdered her husband, Jalgaon congressman Vishram G Patil. She accused Pratibha Patil of shielding her brother

It came to light that a women cooperative bank became insolvent after loan waiver to family members and relatives of Pratibha Patil. The bank was set up by Pratibha Patil in 1973 and in 2003 the RBI served the closure notice due to insolvency.

It came to light that a sugar cooperative was shut down for defaulting with bank loans to the tune of Rs 17.3 crore. Pratibha Patil was the Chairperson and director till she became the governor of Rajasthan.