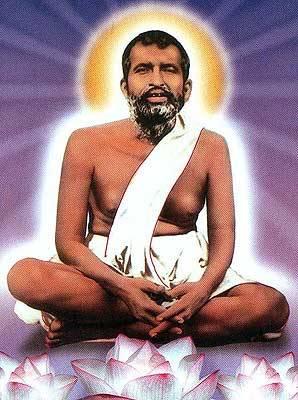 Sri Ramkrishna was born on 17.02.1836 in Kamarpukur, Hoogli of Khudiram Chattopadhay and Chandramoni Devi. He was the 4th child of his parents, after Ramkumar, Katyayani, and Rameswar and a sister, Sarbamangala. Nicknamed as Gadadhar he was a very reckless but god fearing boy since childhood, and was deeply devoted to serve the mother goddess Kali from a young age. He was inspired by the leelas of Lord Krishna and tried to imitate his feats. As a child he was matured for his age and earned the love of all.He had an unusual memory interested in Hindu mythology.Once while playing the part of Shiva in the plays performed during Shivaratri, he attained Vhava Samadhi. His elder brother Ramkumar took him to Dakhineswar to assist him in his works as a priest in the temple. In 1855 Rani Rashmoni of Janbajar offered him the job of the priest of the Goddess Kali at Dakkhineshwar Temple. Onlookers would crowd to see Ramkrishna performing puja as they wanted to see the love and devotion with which it was performed. At the age of 23, May 1859, he married Saradamoni of Jairambati, whom he thought would be his ideal life companion. Soon after, the urge of finding the truth of life made him take sannyas under the sage Totapuri who gave him the sobriquet, Paramhansa.