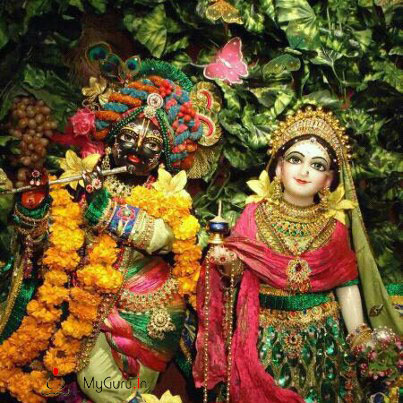 Shri Radhey Ji Ke Articles
Radha also called Radhika, Radharani and Radhikarani, is the mother-in-law to Krishna & even krishna father's sister in the Brahma Vaivarta Purana, and the Gita Govinda of the Vaisnava traditions of Hinduism. Radha is almost always depicted alongside Krishna and features prominently within the theology of today's Gaudiya Vaishnava sect, which regards Radha as the original Goddess or Shakti. Radha is also the principal object of worship in the Nimbarka Sampradaya, as Nimbarka, the founder of the tradition, declared that Radha and Krishna together constitute the absolute truth. Radha's relationship with Krishna is given in further detail within texts such as the Brahma Vaivarta Purana, Garga Samhita and Brihad Gautamiya tantra.

Radha is often referred to as Rādhārānī or "Radhika" in speech, prefixed with the respectful term 'Srimati' by devout followers. Radha is an incarnation of Goddess Lakshmi.

In the story of Krishna, as told in the Mahabharata and the Bhagavata Purana, he spends much of his childhood in the company of young cow-herd girls, called Gopis in the village of Madhuvan. Krishna left his native place at the age of twelve for study at gurukul .The Mahabharata does not describe Krishna's earlier life in Vrindavan in much detail, and focuses more on the later battle of Kurukshetra but within the Bhagavata Purana the child-hood pastimes of Krishna are described very vividly. Within the Bhagavata Purana, Radha is not mentioned by name but is alluded to within the tenth chapter of the text as one of the gopis whom Krishna plays with during his upbringing as a young boy. Krishna left Vrindavan for Mathura at the age of 10 years and 7 months according to Bhagavata Purana. So Radha is assumed to be also 10 years old or less when Krishna left Vrindavan. It is in later texts such as the Gita Govinda where we find the story of Radha given in more detail.


In the Vaishnava devotional or bhakti traditions of Hinduism that focus on Krishna, Radha is Krishna's friend and advisor. For some of the adherents of these traditions, her importance approaches or even exceeds that of Krishna. She is considered to be his original shakti, the supreme goddess in both the Nimbarka Sampradaya and following the advent of Chaitanya Mahaprabhu also within the Gaudiya Vaishnava tradition. Other gopis are usually considered to be her maidservants, with Radha having the prominent position of Krishna's favour "Among the eternal associates of the Lord the gopis are the most exhalted, and among the gopis Srimati Radharani is the best. It has been mentioned in the narration of the Skanda Purana that out of many thousands of gopis, 16,000 are prominent. Out of these, 108 are important, and out of 108, eight are principal. Out of eight gopis, Radharani and Candravali are chief, and out of these two Srimati Radharani is superior."

Her connection to Krishna is of two types: svakiya-rasa (married relationship) and parakiya-rasa (a relationship signified with eternal mental "love"). The Gaudiya tradition focuses upon parakiya-rasa as the highest form of love, wherein Radha and Krishna share thoughts even through separation. The love the gopis feel for Krishna is also described in this esoteric manner as the highest platform of spontaneous love of God, and not of a sexual nature.

Proponents of the Gaudiya and Nimbarka schools of Vaishnavism give the highly esoteric nature of Radha's relationship to Krishna as the reason why her story is not mentioned in detail in the other Puranic texts.

Birth
Radha was the daughter of Vrishbhanu Gurjar who was king Suchandra in his previous life. Suchandra and his wife had acquired a boon from Brahmaji that in the Dwapar age Shri Laxmi will be born as a daughter to them in the form of Radha. King Suchendra and Queen Kalavati only were reborn as Vrishbhanu and Kirtikumari and Laxmiji was incarnated as Radha.

It is said that at Radha’s birth, Devarshi Narad himself went and met Vrishbhanu and informed him, “This girl’s beauty and nature is divine. All the houses, wherever her footprints are, Lord Narayan with all other deities will reside. Nurture this girl thinking her to be a Goddess.” According to Naradji’s advice, Vrishbhanu nurtured Radha with great love and care. Nandbaba who lived in the nearby village was friends with Vrishbanu. Once during the festival of Holi; Vrishbanu went to Gokul to meet Nandrai. At Nandrai and Yashoda’s house Krishna (who was growing up as their son) met Radha. Their union was divine, phenomenal and incessant . This meeting was Radha and Krishna’s first meeting which became eternal.

Radha’s love towards Krishna in the terrestrial or customary meaning is not just the relation between a man and woman. The feeling of this love is divine and phenomenal which gives this love a pious form. The philosophical side of this reduces the distance of the support and supportive, also the difference between the worshipper and worshipful is not there. Krishna is the life of Vraj; Radha is the soul of Krishna. That is why, it is said, “Atma Tu Radhika Tasya” (Radha, you are His soul). One form of Radha is, she is a devotee, worshipper of Krishna and in the second form she is the worshipful, devoted by Krishna. ‘Aradhyate Asau itii Radha.’ Radha – Krishna’s love is the symbol of the feeling of being united. When two souls are united, the difference of the other or the second vanishes.Her father Vrsabhanu was the king of cowherds Gop. Vrsabhanu was a partial incarnation of Lord Narayana while her mother Kalavati was a partial incarnation of Goddess Lakshmi.

Her worship is especially prominent in Vrindavan, the place where Krishna is said to have lived. Wherein Her importance surpasses even the importance of Krishna. Radha's love for Krishna is held within Gaudiya Vaishnavism as the most perfect primarily because of its endless and unconditional nature. Thus she is the most important friend of Krishna, 'His heart and soul', and His 'hladini-shakti' (mental companion potency).

In the Brihad-Gautamiya Tantra, Radharani is described as follows: "The transcendental goddess Srimati Radharani is the direct counterpart of Lord Sri Krishna. She is the central figure for all the goddesses of fortune. She possesses all the attractiveness to attract the all-attractive Personality of Godhead. She is the primeval internal potency of the Lord."

Nimbarka
Nimbarka was the first Vaishnava acharya to disseminate teachings about Radha.

Chaitanya Mahaprabhu
The Bengali saint Chaitanya Mahaprabhu (1486–1534) is believed by many (see especially the modern-day ISKCON movement) to be an incarnation of both Radha and Krishna, simultaneously in one form. Throughout his life, Chaitanya lived as a devotee of Vaishnava tradition, not openly claiming to be any form of Avatar, but in his biographies it is claimed that he revealed his divine form to some of his closer associates.