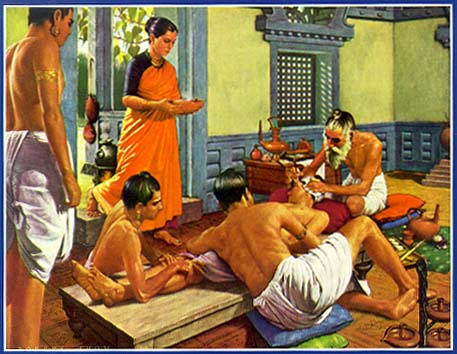 Suśruta (Sanskrit: सुश्रुत fl. 800 BCE) was an ancient Indian surgeon and is the author of the book Susruta Samhita, in which he describes over 300 surgical

procedures, 120 surgical instruments and classifies human surgery in eight categories. He lived, taught and practiced his art on the banks of the Ganges in

the area that corresponds to the present day city of Varanasi in North India.

Because of his seminal and numerous contributions to the science and art of surgery he is also known by the title "Father of Surgery." Much of what is

known about this inventive surgeon is contained in a series of volumes he authored, which are collectively known as the Sushruta Samhita.

Sushruta was educated in Varanasi.

Contributions
There are numerous contributions made by Sushruta to the field of surgery. Surgical demonstration of techniques of making incisions, probing, extraction

laparotomy and management of intestinal obstruction, perforated intestines, accidental perforation of the abdomen with protrusion of omentum. Classified

details of the six types of dislocations, twelve varieties of fractures and classification of the bones and their reaction to the injuries. Principles of fracture

management, viz., traction, manipulation, appositions and stabilization including some measures of rehabilitation and fitting of prosthetics. Classification

of 76 eye diseases with signs, symptoms, prognosis, medical/surgical interventions and cataract surgery. Description of method of stitching the intestines

by using ant-heads as stitching material. First to deal with embryology and sequential development of the structures of the fetus. Dissection and study of

anatomy of human body. Introduction of wine to dull the pain of surgical incisions. Enumeration of 1120 illnesses and recommended diagnosis by

Legacy
The earliest surviving excavated written material which contains the works of Sushruta is the Bower Manuscript—dated to the 4th century AD, almost a

millennium after the original work.

The medical works of both Sushruta and Charaka were translated into Arabic language during the Abbasid Caliphate (750 AD). These Arabic works made

their way into Europe via intermediaries. In Italy the Branca family of Sicily and Gasparo Tagliacozzi (Bologna) became familiar with the techniques of

British physicians traveled to India to see rhinoplasty being performed by native methods. Reports on Indian rhinoplasty were published in the

first major rhinoplasty in the western world by 1815. Instruments described in the Sushruta Samhita were further modified in the Western World.[ Even