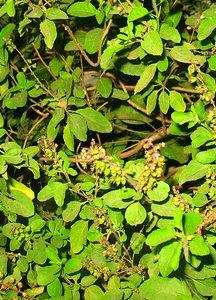 Tulsi Ji Ki Aarti
Tulsi Ji Ki Stuti
Tulsi means the "incomparable one", has spiritually uplifting qualities. The Tulsi (Basil) plant is a sacred plant for the Hindus. Tulsi Pooja (Worship of Tulsi) is observed almost every day in almost all the Hindu houses. It is regarded as an incarnation of Mahalaxmi. The festival of ‘Tulsi Vivah' or the wedding day of Tulsi and Shaligram. is celebrated after Kartik Shukla Ekadashi uptil Purnima. Tulsi Vivah is considered the beginning of the wedding season. Tulsi plant which is sacred bush of herbal leaves symbolizes Hindu femininity respected by men and women. Tulsi is regarded as the "Mother of the World."

It is said that Tulsi an incarnation of Maha Lakshmi, who was born as Vrinda in her previous birth. Vrinda was married to a demon king Jalandhar. But she prayed to Lord Vishnu that her demon husband would be protected, with the result that no God was able to harm him. However on the request of the other Gods, Lord Vishnu took the form of Jalandhar and stayed with the unsuspecting Tulsi. When the truth emerged after Jalandhar's death, Vrinda cursed Vishnu and turned him to stone (Shaligram) and collapsed. From her body emerged the Tulsi plant. That is why Vishnu pooja is considered incomplete without Tulsi leaves. Tulsi vivah is celebrated on the next day of Kartiki Akadashi. On this day Tulsi is married to Shaligram.

Another legend behind this goes as Tulsi came out of the ocean during Amrita manthan as a younger sister of Lakshmi. She was devoted to Lord Vishnu and wanted to marry him but Lakshmi, who was already married to him, did not like the idea and cursed her to become a plant. Thus the Tulsi plant was born. But the all merciful Lord Vishnu took pity and fulfilling her wish declared that when he will be in the form of a Shaligram she will remain close to him in the form of a Tulsi leaf.

On this day Tulsi plants are beautifully decorated as a bride. Sugarcane and branches of tamarind and Amla trees are planted along with the Tulsi plant. People prepare various delicious sweet dishes at home. In Goa a typical Goan ojhe (load of sweets) is sent to the daughter from her parental home along with jodi (cotton threads used to light lamp while performing aarti). Tulsi Vivah ceremony takes place in the late evening. Various poha dishes are offered to Lord Vishnu. Then prasad is distributed among family members and friends.