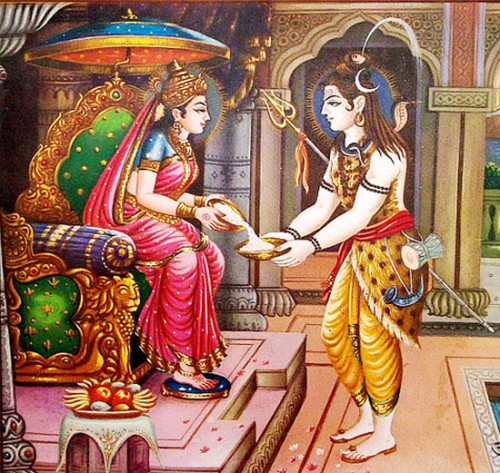 Annapoorna Devi Ji Ke Articles
Annapoorna devi
Annapurna or Annapoorna is the Hindu Goddess of nourishment. Anna means food and grains. Purna means full, complete and perfect. She is a form of Parvati, the consort of Shiva.

City of Kashi
Annapurna is the Goddess of the city of Kashi (now known as Varanasi, U.P., India). Kasi is also known as the City of Light. Ka means the cause, a means the manifestation of consciousness, sa means peace and I is the causal body. Kasi is also the place which causes consciousness to manifest the highest peace of the causal body. And She is the Supreme Goddess of the City of Kasi.

Story of Parvati
Once Goddess Parvati was told by her consort Shiva that the world is an illusion and that food is a part of this illusion called maya.

Her disappearance brought time to a standstill and the earth became barren. There was no food to be found anywhere and all the beings suffered from the pangs of hunger.

Seeing all the suffering, Mother Parvati was filled with compassion and reappeared in Kasi and set up a Kitchen.

Hearing about her return, Shiva ran to her and presented his bowl in alms saying, "Now I realise that the material world, like the spirit, cannot be dismissed as an illusion." Parvati smiled and fed Shiva with her own hands.

Since then Parvati is worshipped as Annapurna, the Goddess of Nourishment.

Annapurna has many names. The Annapurna Sahasranam presents her one thousand names and the Annapurna Shatanama Stotram contains 108 of her names. She is variously described as:

Physically, Annapurna is described as holding a golden ladle adorned with various kinds of jewels in her right hand and a vessel full of delicious porridge in her left. She is seated on a throne. In some depictions, Lord Shiva is shown standing to her right with a begging bowl, begging her for alms.

It is said that she does not eat a morsel unless all her devotees have been fed in her temple.

She is worshipped through the recitation of her thousand names and her one hundred and eight names. The Sri Annapurna Ashtakam composed by Shankaracharya is chanted by several devout Hindus around the world as a prayer for nourishment, wisdom, and renunciation. Before partaking of any food, Hindus chant the following prayer:

“Oh Annapurna, who is always full, complete, and perfect. Beloved energy of Lord Shiva, for the attainment of perfection in wisdom and renunciation, give me alms, Parvati.

My mother is Goddess Parvati, my father is the Supreme Lord Maheswara (Shiva). My relatives are the devotees of Lord Shiva, and the three worlds are my Motherland.”

The Annapurna Vrat Katha containing stories of her devotees are also recited by her devotees.

The most well-known temple dedicated to Goddess Annapurna is in Varanasi, U.P., India. Adjacent to the Sanctum of the Goddess is the Kasi Viswanath temple. The two are separated by only a few yards. Annapurna is regarded as the queen of Varanasi alongside her husband Vishweshwar (Shiva), the King of Varanasi.

In the temple, at noon time, food offerings to the Goddess are distributed to the elderly and disabled daily. During the Autumn Navaratri food is distributed on a larger scale.