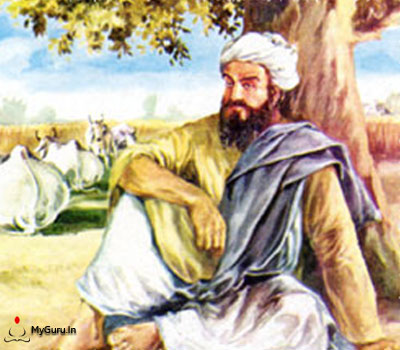 Dhanna Bhagat born 1415 was a Bhagat. He was born in the village of Dhuan Kalan near Deoli city, in the Tonk district of Rajasthan, India.

Max Arthur Macauliffe fixes 1415 as the year of Dhanna\'s birth, but his name does not appears in the writings of Kabir or Ravidas. The earliest mention of his name is in Mira Bai\'s songs that proclaims how Dhanna grew cereals without sowing seed.

The Guru Granth Sahib includes three of Dhana\'s hymns. "Loving devotion," says Dhanna in his sabda in Raga Asa, "is now fixed in my heart and thereby have I found solace and fulfilment. In whose heart is light divine manifested he alone recognizeth the Immaculate One."

He was initiated by Ramananda.

There are a number of myths about the divine powers of Dhanna Bhagat. One such states that once he was ploughing his fields. Large number of sanyasis came to him and demanded food. He gifted all the seed kept for sowing to them and ploughed fields without seeds. The fields produced no food grains but the gourds. When Jagirdar came to collect the levy he offered two gourds. The Jagirdar broke the gourds and found that they were full of pearls. There is a proverb:
धन्‍ना जाट का हरिसों हेत, Dhanna Jat ka Harison het,
बिना बीज के निपजा खेत। Bina Beej ke Nopaja khet.
Meaning - Dhanna Jat had so much love with God that fields produced food grain without seeds.

A long time ago in India there was a simple farmer named Dhanna. He lived a quiet life and loved to farm. Every day on his way to his fields, he passed by the house of a pundit who did many rituals and prayers, and Dhanna found this very interesting. One day he saw the pundit serving food to a stone statue. And he asked the pundit, "Why are you bringing food to a stone?" The pundit replied, "This is not a stone! This is a Thakur. If one pleases the Thakur all their wishes come true. You must feed the Thakur first, and only after that can you eat."

Dhanna was excited, "Wow!” he exclaimed, "How can I get a Thakur?" The pundit was in a hurry and so he picked up a normal stone off the ground and gave it to Dhanna, saying, "This is your Thakur."

Dhanna raced home and cleaned the Thakur. He cooked some chapattis and made some lassi. Offering them to the simple stone he said, "Here Thakur Ji, I hope you enjoy this food." But naturally the Thakur didn\'t eat or drink. It didn\'t even move. Dhanna thought maybe the Thakur was annoyed with him, so he tried another tone, saying sweetly, "I hope I haven\'t bothered you. Please eat. This is the tastiest thing I know how to make."

All day the Thakur didn\'t eat. Nighttime came and Dhanna was very hungry. As the night passed the Thakur still did not eat. Sometimes Dhanna became angry, "Why won\'t you eat?!" he yelled at the Thakur. At other times he became sad and cried, "Oohhh Thakur, please eat." Still other times he was gentle and finally he tried to beg. All night he tried and nothing worked.

The morning came, and Dhanna Ji had not slept nor eaten at all. And then the whole next day and night passed again and Dhanna stayed awake and didn\'t eat. "I will not eat until you eat" he told the Thakur.

Before morning dawned on the third day something special happened. Dhanna was so devoted and innocent that God decided to come disguised as a young man. He appeared to Dhanna and said, "I have come!" Young Dhanna was overjoyed, "I knew you would come."

From then on the two became so close that nothing and no one could separate them. The young man sang beautiful songs to Dhanna and helped with anything he wanted.

One day, the pundit walked by Dhanna\'s hut. Dhanna ran out excitedly, "Pundit ji, I can\'t thank you enough. Thakur is the best! He sings the most beautiful songs!" The pundit was confused and asked, "Your Thakur sings?" Dhanna said, "Oh yes, and he makes the best lassi too. And look, he even helps me in the fields!" Sure enough, the plow in the field was moving but the pundit couldn\'t see anyone driving the cows.

Now both men were confused. Dhanna said, "Why can\'t you see Thakur ji?" The pundit asked,

"How come you CAN see Thakur?" Bhagat Dhanna smiled and reassured the pundit, "Don\'t worry I\'ll ask Thakur about it. He knows everything."

When Dhanna asked the young man why only he could see him, he explained, "Anyone who sincerely meditates on the Naam will see me." Dhanna ji thought for a minute. Then he said, "I have not meditated on the Naam. How come can I see you?"

The young man touched Dhanna\'s forehead and at that moment he saw all his past lives. Lifetime after lifetime he saw how Dhanna Ji had worked on himself. He saw that in his last life Dhanna had obeyed a Guru. His Guru had taught him how to meditate on the Naam. It was this action in his past life that had allowed Dhanna to see Thakur.

Once Dhanna realized this, he bowed down to his Thakur, reverently whispering, "I have treated you like an equal all this time. If only I had known." The young man sang to him and lifted him up, "The way you see me now is not how I truly am. You must meditate inside yourself to see me all the time. Chant the Naam."

Bhagat Dhanna started chanting the Naam again. After some time he became filled with light. He felt the One everywhere. He merged with God. How he felt was so amazing it could not even be described.

Later Bhagat Dhanna wrote poems about this experience that was included in the Siri Guru Granth Sahib Ji. We can read or sing them any time and remember his life story about meeting God through innocence and chanting the Naam with love and devotion.