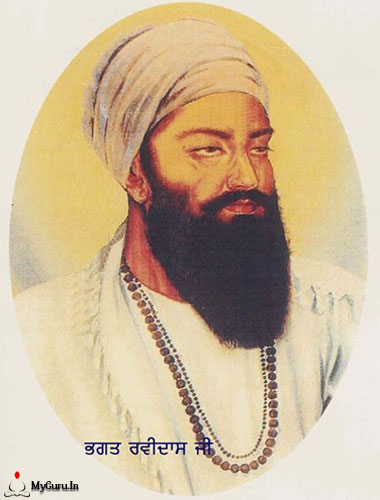 Shri Guru Ravidas ji was born in the 14th century (1377 most of the scholars says) at kanshi (Vanaras), Uttar Pradesh state of Maharashtra in India, in a humble family of Baba Santokh Dass ji being as father and Mata Kalsa Devi ji as mother. His devotional songs and verses made a lasting impact upon the bhakti movement. He is often given the honorific Bhagat or Sant. He was a socio-religious reformer, a thinker, a theosophist, a humanist, a poet, a traveler, a pacifist and a spiritual figure before who even head-priests of Benaras lay prostrate to pay homage.
He was a shoemaker of the Kutbandhla Chamar caste. His devotional songs were included in the Sikh holy book, the Adi Granth, by the fifth Sikh Guru, Guru Arjan Dev. There is also a larger body of hymns passed on independently that is claimed and attributed to Ravidas by some. Ravidas was subversive in that his devotionalism implied a leveling of the social divisions of caste and gender, yet ecumenical in that it tended to promote crossing of sectarian divides in the name of a higher spiritual unity.
He taught that one is distinguished not by one\'s caste (jati) but by one\'s actions (karma) and that every person has the right to worship God and read holy texts. He opened a frontal attack against the system of Untouchability. He rejected the tradition of Brahmin mediator to reach the Supreme Being. He also said that one need not to hide his caste or leave his low profession to reach God. He became a model for his fellow beings to overcome the hierarchical barriers of Brahminical social order and to establish Begumpura - a state without fear and sorrows. Guru Ravidass elevated the status of the labour by emphasizing on the fact that honest labour is empowering.

History
the details of Guru Ravidass\' life are controversial. According to some he was born in 1376/7 or else 1399 CE but many scholars offer later dates. Schaller estimates his lifespan as 1450–1520 while the Encyclopedia Britannica contents itself with a floreat of 15th-16th century. Partly this is due to traditions that make him, the guru of Meera (according to a song attributed to her: "guru miliyaa raidasjee"). However, as Schaller points out, the importance of such claims lies in their establishing the authority of a lineage of gurus (parampara). One may count oneself a disciple of a master without having actually met him.

His origin and parents are also given differently. According to history he was born in a village named Seer Govardhanpur, near Varanasi in Uttar Pradesh, India. His father Baba Santokh Das was a Chamar leather merchant and Mata Kalsa Devi was his mother. His father married Ravidass to Mata Lona Devi at early age and according to the Ravidas Purana he had a son named Vijaydas. A region between Allahabad and Benares is named after him.

The queen of Chittorgarh is said to have been a disciple (this may be connected with Meera, who was married to the ruler of Chittorgarh). It is said that the conservative Brahmins of Kashi could not stand the popularity of this "untouchable saint". A complaint was made to the king that he was working against age-old norms of social order (varnashrama dharma) - a cobbler was not supposed to talk of God or do work of advising or teaching. The ruler arranged for an assembly of learned men. Ravidas was also invited and was felicitated publicly. A procession was arranged (shobha yatra) and the king himself participated.

Devotion to God
As a Vaishnava Hindu, Guru Ravidas was an adherent devotee of God in His form of Rama.
Frequently he was use the words Ram, Raja Ram Chanda, Raghunath, Hari, Krishna, Madho, Gobind to describe God.

He writes:
My caste is mean; my birth is mean.
I come under your protection Ram
Says Ravidas, the cobbler.
Begumpura Shehr

Begumpura ("land without sorrow") is a term coined in a poem by Guru Ravidass. Begampura is the name of an idealized city where there is no suffering or fear, and all are equal. The verse is seen as reflecting both a sense of poverty and caste humiliation, and a desire to find a utopia without suffering:

The regal realm with the sorrowless name
they call it Begumpura, a place with no pain,
no taxes or cares, none owns property there,
no wrongdoing, worry, terror, or torture.
Oh my brother, I\'ve come to take it as my own,
my distant home, where everything is right...
They do this or that, they walk where they wish,
they stroll through fabled palaces unchallenged.
Oh, says Ravidas, a tanner now set free,
those who walk beside me are my friends.
Guru Ravidass and Meera Bai

Meera Bai considered Guru Ravidass as her spiritual Guru. Meera Bai was a queen of Chittor and a daughter of the king of Rajasthan and she used to follow the teachings of Guru Ravidass which teaches about that one\'s fate of the future lies on his karmas (doings) rather than on his caste or creed\'s.

Guru Ravidass incidence of life has become the inspiration for the people of today and in one such incident when Guru Ravidass\'s disciples were going to take holy dip in the sacred river Ganges and wanted Guru Ravidass to accompany them and Guru replied that he has promised to deliver shoes to his customer on that particular day and will not be able to join them due to this particular reason and when one of his disciple urges then Guru Ravidass uttered his belief saying that: “Man changa tow kathoti mein Ganga“ i.e. That is if your heart is pious then the holy river is right in your tub and you need not go anywhere else to take a dip. There is a small chhatri (umbrella) in front of Meera’s temple in Chittorgarh district of Rajasthan. It has guru Ravidass’ engraved foot print also. As a respect to her guru, Meera Bai once wrote:

In the 20th century, syncretic followers of Ravidas\' teachings, who may have identified as Sikh, Hindu, or simply "Ravidasi" began to coalesce. Following the murder of their cleric Ramanand Dass in Vienna in 2009, this movement declared itself to be a religion fully separate from Sikhism, and now known as the Ravidassia religion. The Ravidassia religion compiled a new holy book, Amritbani Guru Ravidass Ji. Based entirely on the writings and teaching of Guru Ravidass, it contains 240 hymns and all Ravidassias temples utilize it.