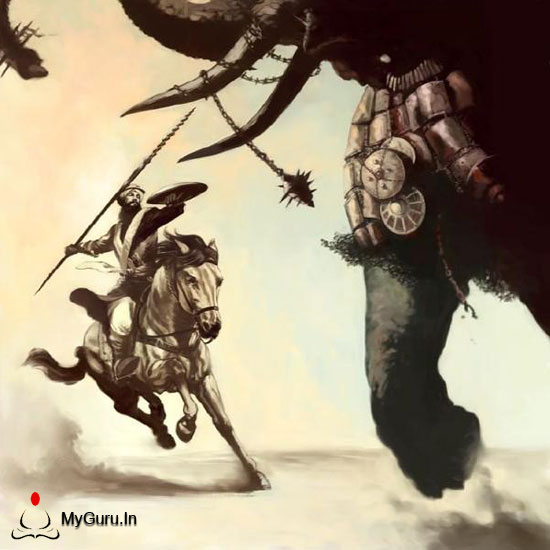 History
Bhai Bachittar Singh(1664-1705), born on 6 May 1664 at Padhiana was the second son of Bhai Mani Singh, a Minhas Rajput and devotee of the Sikh Gurus. One of the five brothers presented by their father for service to Guru Gobind Singh, he joined the order of the Khalsa on the historic Baisakhi day, 14 April 1699, and shot into prominence during the first battle of Anandpur against the hill chieftains, when, on 1 September 1700, he was selected by Guru Gobind Singh to single-handedly face a drunken elephant brought forth by the enemy to batter down the gate of Lohgarh Fort.

Second Battle of Anandpur
Sri Guru Gobind Singh Ji and a small number of Sikhs were defending their position in Lohgarh fort of Anandpur Sahib during The Second Battle of Anandpur, which was under attack by numerically far superior forces under the rule of the Mughal Emperor Aurangzeb and the Hindu rulers of the Hill States. Despite superior numbers, the besiedging forces were unable to penetrate the heavily-defended fort. They brought forth an armoured, druken elephant to batter in the gates. Bhai Bachittar Singh was tasked with stopping the elephant, armed with a Nagni Barcha, a type of spear. As the elephant approached the gate, Bachittar Singh, sallied forth on horseback and made a powerful thrust with his spear piercing the elephant\'s armour plate and injuring the animal in the forehead. The wounded elephant ran back creating havoc and great damage in the enemy\'s ranks. As a result of Bhai sahib\'s bold action, the Sikhs gained an upper hand in this conflict.

Other Battles
Bachittar Singh also took part in actions at Nirmohgarh and Basali and in the last battle of Anandpur. On the fateful night of 5–6 December 1704, when Anandpur was evacuated, he was one of those who safely crossed the torrential Sirsa rivulet. At the head of a flanking guard watching pursuers from the direction of Ropar, he had an encounter with a body of irregulars near Malikpur Ranghran in which he was seriously wounded. He was carried, near death, to Nihang Khan\'s house at Kotla Nihang Khan by Sahibzada Ajit Singh and Bhai Madan Singh.
Guru Gobind Singh asked Nihang Khan to look after Bachittar Singh, after which he proceeded with the remaining forty or so Sikhs towards Chamkaur. Guru Gobind Singh, before his departure, bestowed upon Nihang Khan; a sword, a dagger and a shield.
The rumour spread that Nihang Khan was sheltering some Sikhs; the Mughal troops searched his house while the mortally wounded Bachittar Singh lay in a small room attended by Nihang Khan\'s daughter. Living up to his name, Nihang Khan maintained his cool and succeeded in keeping the search party from entering the room by telling them that his daughter was nursing her very sick husband. Thus the danger was averted.

Shaheed (martyr)
Bachittar Singh\'s wounds proved to be fatal. He succumbed to his injuries and breathed his last on 8 December 1705.
Nihang Khan had the cremation performed secretly the following night.