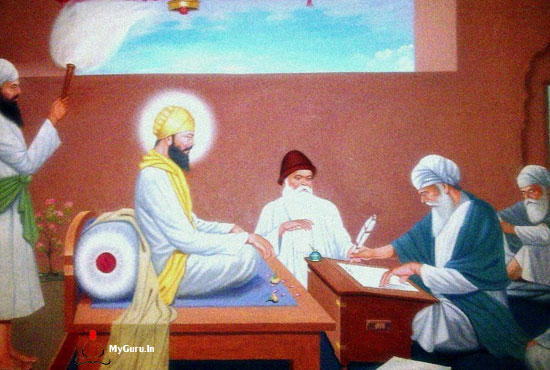 Bhai Bala (1466–1544), born in Talvandi Rai Bhoi (now called Nankana Sahib in Pakistan) . He was a supposed childhood friend and all his life a constant companion of Bhai Mardana and Guru Nanak. According to the Bhai Bala Janam Sakhi\'s. He travelled with Guru Nanak and Bhai Mardana on all their great journeys around the world including China, Mecca, and around India. He supposedly died in Khadur Sahib, in his late 70s in 1544. There is currently ongoing debate surrounding the existence of Bhai Bala.

Bhai Bala\'s Existence
There has been considerable discussion as regards to Bhai Bala\'s existence, particularly within the Sikh academic field. The reasons for this are:
Bhai Gurdas, who has listed all Guru Nanak\'s prominent disciples (in his 11th Var), does not mention the name of Bhai Bala (this may be an oversight, for he does not mention Rai Bular either). However Bhai Mani Singh\'s Bhagat Ratanwali, which contains essentially the same list as that by Bhai Gurdas, but with more detail, also does not mention Bhai Bala. There are a number of other anomalies, which Dr Kirpal Singh has explicated in his Punjabi work `Janamsakhi Tradition.\'

Professor Surjit Hans also notes that the only role of Bhai Bala was to denigrate the name of Nanak and that Guru Nanak prophesizes about a greater bhagat (Hundal) to come:

The first clue to grasping the true character of the Bala Janamsakhi is the fact that the persons related most closely to Guru Nanak are presented in uncomplimentary light. His father, Kalu, for instance, is a cruel man; he is greedy and ill spoken; he blames Mardana for spoiling his son; and Guru Nanak is rather chary of meeting him. Guru Nanak’s wife regrets marrying him, she is hot-tempered and full of anger. His mother-in-law is quarrelsome and hardhearted. His father-in-law curses his fate to have a son-in-law like Guru Nanak. The Guru’s constant companion, Mardana, is pleased with counterfeit coins and cast off clothes; he is all the time hungry.

Also in the Bhai Bala Janamsakhi are several language inconsistencies’. For example, the Sikh salutation \'Waheguru Ji Ki Fateh\' is used in the Bala Janamsakhi, however this term only gained currency during the reign of Guru Gobind Singh.