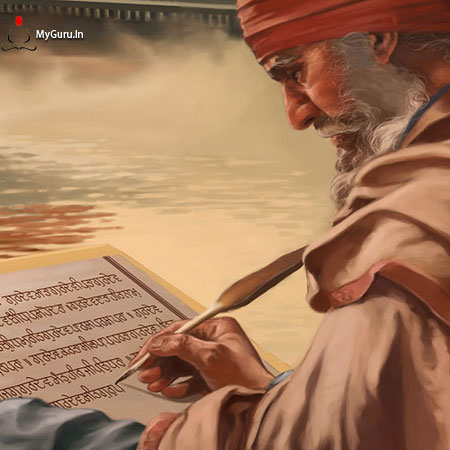 Bhai Gurdas Ji (1551 – 25 August 1636), was a Punjabi Sikh writer, historian, preacher and religious figure. He was the original scribe of the Guru Granth Sahib and a companion of four of the Sikh Gurus.

History
Bhai Gurdas Ji was born in 1551 in Goindwal, a small village in the Punjab. His father was Bhai Ishardas who was a first cousin of Guru Amar Das Ji (see family tree) His mothers name was Jivani Ji and she died in 1554 when Gurdas Ji was only three.
After being orphaned at the age of 12, he was adopted by his uncle Guru Amar Das Ji. He learned Sanskrit, Brajbhasha, Persian and Punjabi (Gurmukhi) and eventually began preaching Sikhism. He spent his early years at Goindval and Sultanpur Lodhi. At Goindval he listened to scholars and swamis who kept visiting the town while traversing the Delhi-Lahore road. He later moved to Varanasi where he studied Sanskrit and Hindu scriptures. There, he was subsequently initiated into Sikhism. After Guru Amar Das Ji died, his successor Guru Ram Das Ji, appointed Gurdas Ji as the Sikh missionary to Agra.

Later life
in 1577, Bhai Gurdas Ji contributed his labor to excavating the pool at the Shri Harmandir Sahib. Twenty years later, he went on an expedition to Kartarpur and recited many of the early hymns to Emperor Akbar. This was at a time when many of the Sikhs were becoming very anti-Muslim in tone and family feuds within the Gurus\' family had put Sikhism in danger. Akbar received the verses positively and became convinced there were no anti-Muslim suggestions.
After Guru Ram Das Ji died, Bhai Gurdas Ji formed a close relationship with the fifth Guru, Guru Arjan Dev Ji. Guru Arjan Dev Ji had great respect for him, and regarded Bhai Gurdas Ji as his maternal uncle ("mama"). It is said that the Mughal emperor Jahangir was growing jealous of the popularity of Sikhism, and Bhai Gurdas Ji was sent to Kabul, Kashmir, Rajasthan, and Varanasi again to preach Sikhism.He even went to Sri Lanka, preaching the name of the guru among the masses and showing them the true way of life.

Literary works
He completed the Adi Granth in 1604. It took him nearly 19 years to complete this task. Bhai Gurdas Ji not only wrote the Adi Granth as dictated by Guru Arjan Dev Ji but also supervised four other scribes, Bhai Haria, Bhai Sant Das, Bhai Sukha and Bhai Manasa Ram, in the writing of various scriptures. His other works in Punjabi are collectively called Varan Bhai Gurdas.