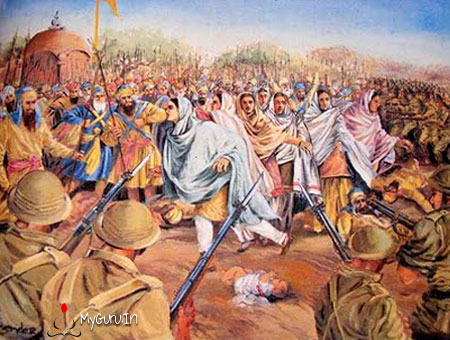 Balbir Kaur was 22 years old, full of youth and utterly beautiful. Guru's faith and feelings of selfless service for humanity had generated such a glow on her face that she seemed like a goddess of purity or an angel. She was not alone. She was accompanied by an year old beautiful son. The playful happy face of this child was not only Balbir Kaur's joy but the source of amusement for the whole Jatha. He played with everyone in the Jatha along the way.

History
Movement for the liberation of Gurdwaras from the control of corrupt priests (Mahants), protected by the British, had awakened the Sikhs and they began to assert their religious independence through non-violent efforts. The British rulers gunned down many participants of the movement and arrested thousands to suppress them. This short life story of Bibi Balbir Kaur will show that the Sikh women also did not lag behind their brothers, and willingly sacrificed themselves and their children by taking part in the movement in a non-violent way. Their joint struggle forced the British to yield. The ruler of Nabha state (now part of the Punjab), Ripudaman Singh, had a soft corner for the movement mentioned above and was an independent minded ruler. His activities deeply troubled the British. He was not on good terms with the ruler of the Patiala state. The quarrel between them could be easily settled by imperial arbitration, but the British officials forced the ruler of Nabha to abdicate. This forced abdication led to a strong agitation among the Sikhs. British officials of the Nabha state forcibly dispersed a meeting of the Sikhs who had gathered in the Gurdwara Gangsar at Jaito, a city in the Nabha state. The British officials also interrupted Akhand Path (continued recitation of the Sri Guru Granth Sahib for forty eight hours) started by the Sikhs to pray for the restoration of the rights of the ruler, Ripudaman Singh. This incident led to a strong agitation by the Sikhs who could not tolerate the interference in their right to worship freely.

This was an open challenge, which the S.G.P.C. (Shromani Gurdwara Parbandhak Committee) or supreme body for the management of the Gurdwaras with its headquarters at Amritsar, accepted. It had already liberated Gurdwara at Nankana Sahib (the birthplace of Guru Nanak) and the Golden Temple at Amritsar. It had also won the struggle against the government at Guru Ka Bagh near Amritsar. A state of war was declared and a band of martyrs started from Akal Takhat, Amritsar to Jaito to start the Akandh Path there. Every member of the band took a pledge to remain non-violent at any cost and to sacrifice his/her life if attacked. At first a band of 25 volunteers left Amritsar daily for Jaito, but they were forcibly stopped by the administration of Nabha from entering the Gurdwara. Many of them lost their lives, but the result was not satisfactory. Now the S.G.P.C. decided to send five hundred people daily, and the first batch of martyrs left the Akal Takhat on February 9, 1924. Every one of them took a pledge to remain non-violent if fired or tortured, and to start the Akhand Path at the Gurdwara at Jaito on February 21, 1924. The number of volunteers was much more than required and thousands were asked to wait for their turn. Ladies were not allowed to proceed with the band, but they insisted to participate in such a holy endeavor. They succeeded to accompany the band on their plea that they would cook food on the way. Bibi Balbir Kaur, with her two year old son, was the leader of the women volunteers.

The first batch of five hundred left Amritsar under the echoes of “Jo Bole, So Nihal, Sat Sri Akal.” Everyone was garlanded and they were in high spirits. Thousands had gathered to wish them success. This non-violent march of unarmed batch was a unique event being watched by the whole world. Organized in rows of four, these saint- soldiers proceeded from Amritsar on foot reciting “Sat Nam Waheguru.” At their first rest stop, the local Sikhs honored the batch, served them and took care of their food and other necessities. After the first stop, it became clear that the services of the ladies for cooking food would not be required. The leader of the band asked them to return. Others agreed, but Balbir Kaur wanted to continue the march with her brave brothers and did not return. When the leader asked her to go back, she, with tears in her eyes, said, “Brother, don’t stop me from participating in this noble struggle. I am not afraid of death. I request you to let me proceed with my brothers.” The leader did not want to break her heart, and reluctantly permitted her, keeping in view her utter display of self-sacrifice. She was a beautiful lady of 22 years and full of youth. Her determination and feelings of selfless service were visible on her face. She looked like a goddess of purity and sacrifice. Her innocent two year old child was a source of amusement for every member of the party. When the group reached near the destination, the leaders stopped and said, “The British forces are ready to face us with machine guns.

I request the accompanying congregation to return. Only those permitted by the Akal Takhat should proceed further and others should return, and wait for their turn.” Some returned while others found hidden routes. They planned to join the band to seek martyrdom when the firing would start. Bibi Balbir Kaur, with her son did not adopt any hidden route and continued to march with the other members of the party. When the leader came to know that the Bibi was marching with the band, he stopped, came to her and said, “Sister, there is real danger of firing ahead. You should not continue further.” She replied with folded hands, “Dear brother, don’t stop me, I am also a baptized one and shall deem myself fortunate if I am martyred along with 500 brothers. Our Gurus have bestowed equality to women. This is sacrilegious that I should not be allowed to proceed further. If you are worried about my child, let him serve the community. He cannot get a better chance in life.” Saying these words, she hugged the child and could not talk further due to tears in her eyes. The leader persuaded her to return and other members of the party also pressured her to go back. She did not budge from her decision to march to death with the others. Her persuasive arguments and her burning desire for sacrifice forced everybody to accept her plea. Even the leader was forced to accept her decision. Saint-soldiers, with their yellow flag fluttering in the air again started their march, under the command of their leader, with faith in their mission. Their brave faces projected calmness. Every one seemed fully prepared for sacrificing his life. People of every faith welcomed them on their way and served them with sweets and milk. Flowers were showered upon these living martyrs.

But as soon as the party entered the boundary of the Nabha state, it was warned by the state police and the British forces not to proceed forward. The saint-soldiers did not stop and continued their march. When they reached near the city of Jaito, they were welcomed with the shower of bullets. Still they continued the march while meditating Sat Nam Waheguru. None showed his back. There was blood everywhere. It appeared that they were playing Holi (festival of colors) of blood. Many fell on the ground, but courageously rose immediately and continued the march. Some of them died on the spot and received martyrdom. Bibi Balbir Kaur continued her march hugging her child. With a smile on her face, she was waiting for the bullet she had eagerly waited so far. Suddenly a bullet hit her in her forehead. Her face was covered with blood. She did not stop and continued the march while her innocent child played with the flowing blood on her face. A stray bullet struck the child in her arm. The bullet pierced the child through his ear.
The child died in an instant. She kissed his forehead and placed his dead body along with the other wounded and killed. Saying, “O God, Take back your charge temporarily entrusted to me,” she rushed forward along with the members of the band, encouraging them to face the bullets bravely. Her face turned yellow for the loss of blood, and her steps were unsteady, but she kept her pace with others. After reaching the Gurdwara she bowed her head to God and thanked Him for giving her a chance to reach there. The bullets had not stopped raining. Suddenly a bullet hit straight her chest and pierced her body. This bullet was the message that she had been waiting eagerly. Her body fell on the ground, but her soul left to join her child. Her cherished desire was fulfilled. Her bloody face showed peace and courage. The agitation continued for twenty-one months and many bands of five hundred each followed one another. In the end, the British government yielded, and the Sikhs completed not one but one hundred and one Akhand Paths in that Gurdwara. Balbir Kaur became immortal and her heroic deed is mentioned in many books. In fact, such sacrifices created a new life amongst the Sikhs in those days.