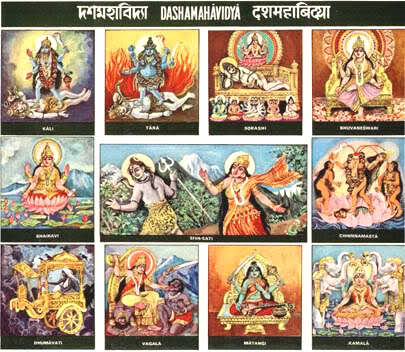 Mahavidyas (Great Wisdoms) or Dasha-Mahavidyas are a group of ten aspects of the Divine Mother or Kali herself or Devi in Hinduism. The 10 Mahavidyas are Wisdom Goddesses, who represent a spectrum of feminine divinity, from horrific goddesses at one end, to the gentle at the other.

The development of Mahavidyas represents an important turning point in the history of Shaktism as it marks the rise of Bhakti aspect in Shaktism, which reached its zenith in 1700 CE. First sprung forth in the post-Puranic age, around 6th century C.E., it was a new theistic movement in which the supreme being was envisioned as female. A fact epitomized by texts like Devi-Bhagavata Purana, especially its last nine chapters (31-40) of the seventh skandha, which are known as the Devi Gita, and soon became central texts of Shaktism.

The name Mahavidyas comes from the Sanskrit roots, with maha meaning 'great' and vidya meaning, 'revelation, manifestation, knowledge, or wisdom.

Names
Shaktas believe, "the one Truth is sensed in ten different facets; the Divine Mother is adored and approached as ten cosmic personalities," the Dasa-Mahavidya ("ten-Mahavidyas"). The Mahavidyas are considered Tantric in nature, and are usually identified as:

Kali: The ultimate form of Brahman, "Devourer of Time" (Supreme Deity of Kalikula systems)
Tara: The Goddess as Guide and Protector, or Who Saves.Who offers the ultimate knowledge which gives salvation (also known as Neel Saraswati).
Lalita-Tripurasundari (Shodashi): The Goddess Who is "Beautiful in the Three Worlds" (Supreme Deity of Srikula systems); the "Tantric Parvati" or the "Moksha Mukta".
Bhuvaneshvari: The Goddess as World Mother, or Whose Body is the Cosmos
Bhairavi: The Fierce Goddess
Chhinnamasta: The Self-Decapitated Goddess
Dhumavati: The Widow Goddess,or the Goddess of death.
Bagalamukhi: The Goddess Who Paralyzes Enemies
Matangi: the Prime Minister of Lalita (in Srikula systems); the "Tantric Saraswati"
Kamala: The Lotus Goddess; the "Tantric Lakshmi"

The Mahabhagavata Purana and Brhaddharma Purana however, list Shodashi (Sodasi) as Tripura Sundari, her another name. The Guhyatiguyha-tantra associates the Mahavidyas with the ten Avatars of Vishnu, and states that the Mahavidyas are the source from which the avatars of Vishnu arose. All ten forms of the Goddess, whether gentle or terrifying, are worshiped as the universal Mother.