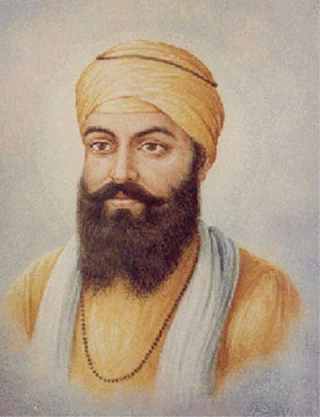 
Guru Angad Dev began life with the name of Lehna. Born to Hindu parents, in Harike, the present day Amritsar of Panjab, India, he grew to be an ardent devotee of Goddess Durga. Lehna married Khivi and started a family. They had a son Dasu and daughter Amro.

One day Lehna overheard the hymn of Japji sung. He learned that the words were composed by Guru Nanak Dev and made arrangements to see Nanak while on a pilgrimage to worship Durga. Upon meeting Guru Nanak, Lehna experienced an immediate conversion. He became the devoted disciple of the Guru and an eager follower of Sikhism. Guru Nanak tested Lehna’s dedication and faith, and ultimately appointed Lehna as his successor. Bestowing upon him the title of Second Guru, Nanak gave Lehna the name Angad, meaning "Part of the Original."

Guru Angad Dev established a daily worship routine which included bathing, early morning meditation, and the study and singing of devotional hymns such as Asa di Var. Angad Dev and Khivi had another daughter Anokhi, and son Datu. As the father of four, Angad Dev placed great emphasis on education. He perfected the phonetic Gurmukhi script with the addition of vowels, so that the script could be easily read by anyone. After morning services he gave lessons to both children and adults. Guru Angad Dev penned 236 lines of inspirational poetic verse which would later be included in the scripture of the Guru Granth Sahib.

uru Angad exemplified the ethics of honest work and selfless service, contributing all of his earnings to langar, a free communal kitchen tended by his wife, Khivi. Renowned as a compassionate healer, the Guru helped to ease the suffering of lepers. He also encouraged physical fitness and taught the art of wrestling. Guru Angad Dev and Khivi settled in Khadur and humbly served the Sikhs for the duration of their lives. Guru Angad appointed his disciple Amar Das as his successor.