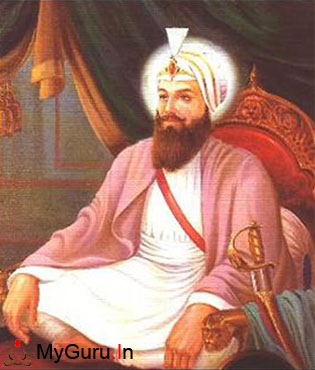 Life
Guru Har Rai Sahib Ji was the seventh of the Sikh Gurus. He became Guru on 8 March 1644 following the footsteps of his grandfather. Just before his death at age 31, Guru Har Rai Sahib passed the Guru Gaddi to His Younger Son, the five year old Guru Har Krishan.
Guru Har Rai Sahib was the Son of Baba Gurdita and Mata Nihal Kaur (also known as Mata Ananti Ji). Baba Gurdita was son of the Sixth Guru Guru Hargobind Sahib. Guru Har Rai Sahib married Mata Kishan Kaur (sometimes also referred to as Sulakhni) the daughter of Sri Daya Ram . Guru Har Rai had and two sons: Baba Ram Rai and Guru Harkrishan.
Although, Guru Har Rai was a man of peace, he never disbanded the armed Sikh Warriors, who earlier were maintained by his grandfather, Guru Hargobind. He always boosted the military spirit of the Sikhs, but he never indulged in any direct political or armed controversy with the Mughal Empire. Once, Dara Shikoh (the eldest son of emperor Shah Jahan), came to Guru Har Rai asking for help in the war of succession launched by his half-brother the murderous Aurangzeb. The Guru had promised his grandfather to use the Sikh Cavalry only in defense. He, nevertheless, helped him to escape safely from the bloody hands of Aurangzeb's armed forces by having his Sikh warriors hide all the ferry boats at the river crossing after they had been used by Dara Shikoh in his escape.

History
Once, while the Guru Har Rai was returning from a tour of the Malwa and Doaba regions, Mohamad Yarbeg Khan, (son of Mukhlis Khan, who had been killed by Guru Hargobind), when he had led his forces against the Sikhs the man attacked the kafla of the Guru with a force of one thousand armed men. The revengeful attack was repulsed by a few hundred 'Saint-Soldiers' of the Sikhs with great courage and bravery. The enemy suffered a heavy loss of life and fled the scene. This self-defense measure, was a reply to the surprise attack of the Muslims overlords. Guru Har Rai often bestowed Sikh warriors with robes of honor in reward.
The Guru also established an Aurvedic (herbal medicine) hospital and a research center at Kiratpur Sahib where he also maintained a zoo. Once Dara Shikoh, the eldest son of Shah Jahan fell seriously ill by some unknown disease (usually explained as trimmings of tiger's whiskers sneaked into his food by his envious sibling, Aurangzeb.). The court hakims (physicians), both Indian and European attempted cures, but there was no improvement. At last the emperor made a humble request to the Guru for the treatment of his son. Accepting the request Guru Har Rai, sent some medicinal herbs, then available only in his Aurvedic hospital, back with the emperor's messenger. Dara Shikoh was cured of his near fatal illness. The emperor, whole heartedly thanked the Guru and offered a jagir (title to land and villages and a portion of the profits (lagaan) derived from it), which Guru Har Rai declined.
Guru Har Rai visited the Doaba and Malva regions of Punjab where he preached to the Sikhs in big huge numbers.
Guru Har Rai also visited Lahore, Sialkot, Pathankot, Samba, Ramgarh and many places in the Jammu and Kashmir region.Guru Ji established 360 Sikh 'missionary' seats called Manjis (after the small cot (manji) used by the Guru's representatives. He also tried to improve the old corrupt Masand system and appointed pious and committed personalities, such as Suthre Shah, Sahiba, Sangtia, Mian Sahib, Bhagat Bhagwan, Bhagat Mal and Jeet Mal Bhagat (also known as Bairagi), as the heads of Manjis.
Guru Har Rai Ji faced some serious difficulties during the period of his guruship. The corrupt Masands, Dhir Mal and Minas always tried to preclude the advancement of the Sikh religion.

Recitation (Gurbani)
One day the Sikhs asked the Guru whether those who read the Gurus' hymns without understanding them, derived any spiritual advantage from it. The Guru gave no reply at the time, and next morning went hunting. En route, the Guru came across a broken pot which had held butter. The rays of the sun were melting the butter on the broken pot fragments. The Guru took one of these fragments in his hand and said, "Look my Sikhs, broken pot shreds—when heated, the butter that had adhered to them readily melts. As the grease adheres to the potshreds, so do the Gurus' hymns to the hearts of his Sikhs. At the time of death the Gurus' instruction shall assuredly bear fruit. Whether understood or not, it has within it the seed of salvation. Perfume still clings to a broken vase." The meaning of the parable is that whosoever daily reads the Gurus' shabads shall assuredly obtain peace. And even though he may not fully understand them, God will undoubtedly assist him.
Guru Ram Das has said: "The Word is the Guru, and the Guru in the Word, and in the Word is the essence of ambrosia."