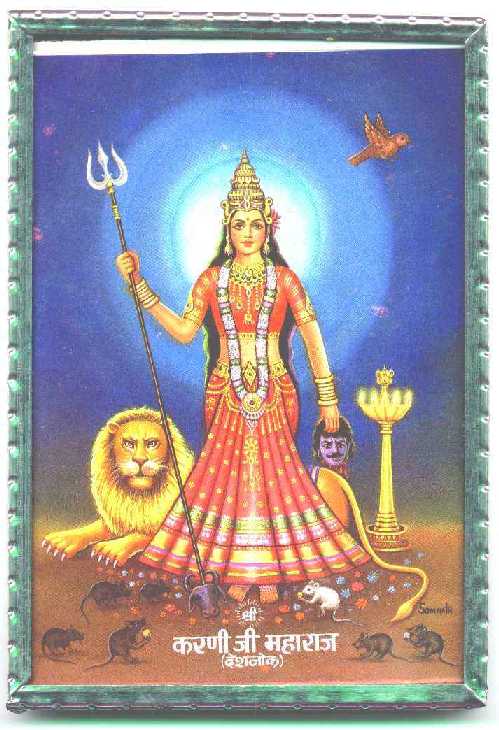 Karni Mata (2 October 1387 – 23 March 1538)  was a female Hindu sage born in the Charan caste and is worshiped as the incarnation of the goddess Durga by her followers. She is an official deity of the royal family of Jodhpur and Bikaner. During her lifetime, she laid the foundation stone of two of the important forts in Rajputana. She lived an ascetic life, and most of the temples dedicated to her were dedicated during her lifetime. A temple dedicated to her during her lifetime differs from others in that it does not contain an image or idol of her but rather contains a foot-print to symbolize her visit to that place. The most famous of her temples is the temple of Deshnoke, which was created following her mysterious disappearance from her home. The temple is famous for its rats, which are treated as sacred and given protection in the temple. The second name of Karni mata is (Nari bai). Contrary to some reports, the temple is of the Hindu sect and is not affiliated with the Jainism.


Karni Mata was born on 2 October 1387 in the village of Suwap in the Jodhpur district of Rajasthan. The seventh daughter of Mehoji Charan and his wife Deval Devi, her original name was Ridhubai. According to legend, she earned the honorific name Karni at age six by miraculously curing her aunt. Mata—a term meaning "mother"— was commonly added to the names of those worshipped as mother goddesses. She married Dipoji Charan of the village of Sathika around AD 1415 but did not live a conventional "married life."

Later on she arranged the marriage of her husband with her younger sister Gulab. She lived in her in-laws' village for about two years before leaving with her followers and a herd of cattle to live a nomadic life, camping at sunset. One such camp was made at the village Jangloo, but a servant of Rao Kanha who was ruler of the place, denied them access to water for people and cows. On this, Karni Mata declared her follower Rao Ridmal of Chandasar as new ruler of the village and continued on her journey. When she reached near Deshnok, Rao Kanha himself came to oppose her camping but he died.[clarification needed] Karni mata stopped further wandering and started living there. Her husband Depoji died in 1454.

In 1453, she gave her blessing to Rao Jodha of Jodhpur for conquering Ajmer, Merta and Mandor. In 1457, she went to Jodhpur at Rao Jodha's request to lay the cornerstone of the fort at Jodhpur.

Her first temple was constructed in the village of Mathaniya during her lifetime by her follower Amara Charan. In 1472, she arranged the marriage of Rao Bika (the fifth son of Rao Jodha) and Rang Kunwar (daughter of Rao Shekha of Pungal) to turn the enmity of the Rathor and Bhatian families into friendship. In 1485, she laid the foundation stone of the fort of Bikaner at the request of Rao Bika. In 1538, Karniji went to visit Maharaja of Jaisalmer. She was travelling back to Deshnok with her stepson Poonjar and a few other followers on 21 March 1538. They were near Gadiyala and Girirajsar of Kolayat district in Bikaner district where she asked the caravan to stop for water. She disappeared there, reportedly at the age of 151 years.

Karni Mata Temple, Deshnoke
The temple is also known as the Temple of Rats.

The Karni Mata Temple at Deshnoke, 30 km from Bikaner, India, was completed in the early 20th century in the late Mughal style by Maharaja Ganga Singh of Bikaner. The temple was further enhanced by Kundanlal Verma of Hyderabad-based Karni Jewelers in 1999. The silver gates to the temple and the marble carvings were also donated by him.. During Navratri thousands of people travel to the temple by foot.

The legend
Legend has it that Laxman, Karni Mata's stepson (or the son of one of her storytellers), drowned in a water tank he was attempting to drink from. Karni Mata implored Yama, the god of death, to revive him. First refusing, Yama eventually relented, permitting Laxman and all of Karni mata's male children to be reincarnated as rats.

The temple is famous for the approximately 20,000 Black Rats that live, and are revered in, the temple. If one of the rats is killed, it must be replaced with one made of solid gold. Eating food that has been nibbled on by the rats is considered to be a "high honor".

White rats
Out of all of the thousands of rats in the temple, there are a few white rats, which are considered to be especially holy. They are believed to be the manifestations of Karni Mata herself and her four sons. Sighting them is a special blessing and visitors put in extensive efforts to bring them forth, offering prasad, a sweet holy food.