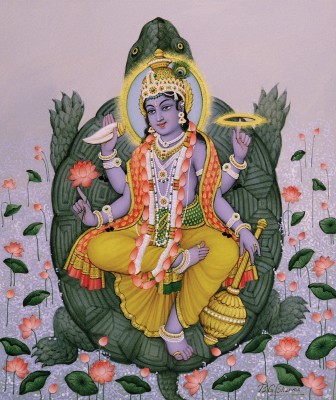 In Hinduism, Kurma was the second Avatar of Vishnu. Like the Matsya Avatar also belongs to the Satya yuga. The only temple dedicated to the Kurma Avatar of Vishnu is located in Srikurmam, Andhra Pradesh.

Samudra manthan (The Churning of the ocean)
The Devas lost their strength and powers due to a curse by the sage Durvasa because Indra, the king of the Devas, had insulted the sage’s gift (a garland) by giving it to his elephant (Airavata) which trampled upon it. Thus, after losing their immortality and kingdom, they approached Lord Vishnu for help.

Vishnu suggested that they needed to drink the nectar of immortality to regain their lost glory. However, they needed to strive hard to acquire the nectar since it was hidden in the ocean of milk. After declaring a truce with their foes (Asuras), Indra and his Devas together with the Asuras, use the serpent Vasuki as a churning rope and the mount Mandara as the churning staff.

Kurma Avatar of Vishnu, below Mount Mandara, with Vasuki wrapped around it, during Samudra manthan, the churning of the ocean of milk. ca 1870.

When they began churning, the mount began sinking into the ocean. Taking the form of a turtle (Kurma), Vishnu bears the entire weight of the mountain and the churning continues. Fourteen precious things come out of the ocean, culminating with Dhanvantari, the physician of the gods, appearing with the nectar of immortality. The Asuras immediately rush and grab the nectar while quarrelling among themselves. Vishnu again comes to the rescue in the form of a beautiful damsel, Mohini and tricks the Asuras and retrieves the potion which is distributed to the Devas. Though the Asuras realize Vishnu’s tricks, it is too late, as the Devas regain their renowned prowess and defeat them.Two temples dedicated to this Avtar of Bhagwan Vishnu are located in India, one is at Srikurmam in Andhra Pradesh Sri_Kurmam and second Temple is located at Gavirangapur in Chitradurg District of Karnataka.