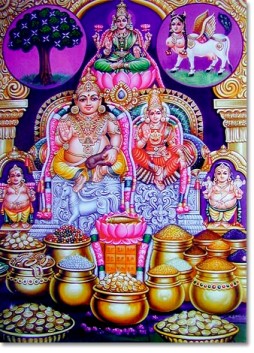 ubera also spelt Kuber, is the Lord of wealth and the god-king of the semi-divine Yakshas in Hindu mythology. He is regarded as the regent of the North (Dik-pala),
and a protector of the world (Lokapala) His many epithets extol him as the overlord of numerous semi-divine species and the owner of the treasures of the world.

Kubera is often depicted as a fat man, adorned with jewels and carrying a money-pot or money-bag, and a club.

Originally described as the chief of evil spirits in Vedic-era texts, Kubera acquired the status of a Deva (god) only in the Puranas and the Hindu epics. The scriptures
describe that Kubera once ruled Lanka, but was overthrown by his demon stepbrother Ravana, later settling in the city of Alaka in the Himalayas. Descriptions of the
"glory" and "splendours" of Kubera's city are found in many scriptures.

Kubera has also been assimilated into the Buddhist and Jain pantheons. In Buddhism, he is known as Vaisravana, the patronymic used of the Hindu Kubera and is also equated with Pañcika, while in Jainism, he is known as Sarvanubhuti.


Iconography
Kubera is often depicted as a dwarf, with fair complexion and a big belly. He is described as having three legs, only eight teeth, one eye, and being adorned with jewels.

He is sometimes depicted riding a man. The description of deformities like the broken teeth, three legs, three heads and four arms appear only in the later Puranic

texts. Kubera holds a mace, a pomegranate or a money bag in his hand. He may also carry a sheaf of jewels or a mongoose with him. In Tibet, the mongoose is considered a symbol of Kubera's victory over Nāgas—the guardians of treasures. Kubera is usually depicted with a mongoose in Buddhist iconography.

A bronze Matrika goddess group along with Ganesha (left) and Kubera (right) currently at the British Museum. Originally from Eastern India, it was dedicated in 43rd year of reign of Mahipala I (c. 1043 AD).

In the Vishnudharmottara Purana, Kubera is described as the embodiment of both Artha ("wealth, prosperity, glory") and Arthashastras, the treatises related to it—and
his iconography mirrors it. Kubera's complexion is described as that of lotus leaves. He rides a man—the state personified, adorned in golden clothes and ornaments,
symbolizing his wealth. His left eye is yellow. He wears an armour and a necklace down to his large belly. The Vishnudharmottara Purana further describes his face to be inclined to the left, sporting a beard and mustache, and with two small tusks protruding from the ends of his mouth, representing his powers to punish and to bestow favours. His wife Riddhi, representing the journey of life, is seated on his left lap, with her left hand on the back of Kubera and the right holding a ratna-patra (jewel-
pot). Kubera should be four-armed, holding a gada (mace: symbol of dandaniti—administration of justice) and a shakti (power) in his left pair, and standards bearing a lion—representing Artha and a shibika (a club, the weapon of Kubera). The nidhi treasures Padma and Shankha stand beside him in human form, with their heads
emerging from a lotus and a conch respectively.

The Agni Purana states that Kubera should be installed in temples as seated on a goat, and with a club in his hand. Kubera's image is prescribed to be that of gold,
with multi-coloured attributes. In some sources, especially in Jain depictions, Kubera is depicted as a drunkard, signified by the "nectar vessel" in his hand.

Names
Jambhala, the Buddhist Kubera, depicted similar to Kubera The exact origins of the name Kubera are unknown.  "Kubera" or "Kuvera" (कुवेर) as spelt in later Sanskrit, means "deformed or monstrous" or "ill-shaped one"; indicating his deformities. Another theory suggests that Kubera may be derived from the verb root kumba, meaning to conceal. Kuvera is also split as ku (earth), and vira (hero).

As the son of Vishrava ("Fame"), Kubera is called Vaisravana and as the son of Ilavila, Ailavila. Vaisravana is sometimes translated as the "Son of Fame". The Sutta Nitapa
commentary says that Vaisravana is derived from a name of Kubera's kingdom, Visana. Once, Kubera looked at Shiva and his wife Parvati with jealousy, so he lost one of his eyes. Parvati also turned this deformed eye yellow. So, Kubera gained the name Ekaksipingala ("one who has one yellow eye"). He is also called Bhutesha ("Lord of spirits") like Shiva. Kubera usually is drawn by spirits or men (nara), so is called Nara-vahana, one whose vahana (mount) is nara. Hopkins interprets naras as being water-spirits, although Mani translates nara as men. Kubera also rides the elephant called Sarvabhauma as a loka-pala.

Kubera also enjoys the titles "king of the whole world", "king of kings" (Rajaraja), "Lord of wealth" (Dhanadhipati) and "giver of wealth" (Dhanada). His titles are sometimes related to his subjects: "king of Yakshas" (Yaksharajan), "Lord of Rakshasas" (Rakshasadhipati), "Lord of Guhyakas" (Guhyakadhipa), "king of Kinnaras"(Kinnararaja), "king of animals resembling men" (Mayuraja), and "king of men" (Nararaja). Kubera is also called Guhyadhipa ("Lord of the hidden"). The
Atharvaveda calls him the "god of hiding".

In the Atharvaveda—where he first appears-and the Shatapatha Brahmana, Kubera is the chief of evil spirits or spirits of darkness, and son of Vaishravana.  The Shatapatha Brahmana calls him the Lord of thieves and criminals. In the Manusmriti, he becomes a respectable Loka-pala ("world protector") and the patron of merchants.  In the epic Mahabharata, Kubera is described as the son of Prajapati Pulastya and his wife Idavida and the brother of sage Vishrava. Kubera is described as born from a cow. However, from the Puranas, he is described as the grandson of Pulastya and the son of Vishrava and his wife Ilavida (or Ilivila or Devavarnini), daughter of the sage Bharadvaja or Trinabindu.

By this time, though still described as an asura (demon), Kubera is offered prayers at the end of all ritual sacrifices.His titles, such as "best of kings" and "Lord of kings" (Harivamsa indicate that Kubera is made "Lord of kings"), in contrast to the god-king of heaven, Indra, whose title of "best of gods" led to the later belief that Kubera was a man. The early texts Gautama Dharmashastra and Apastamba describe him as a man. Only the Grihyasutras of Shankhayana and Hiranyakesin call him a god, and suggest offerings of meat, sesame seeds and flowers to him.

Puranic and epic descriptions: Godhood acquired
Brahma with the four Loka-palas. Kubera, the Lord of the North and wealth, carrying a mace and with a lion, is second from right The Puranas and the epics Mahabharata and Ramayana grant Kubera unquestioned godhood. Kubera also acquired the status of the "Lord of riches" and the wealthiest  Deva. He also becomes a Loka-pala ("world protector") and guardian (dik-pala) of the North direction, although he is also sometimes associated with the East.

Kubera's status as a Loka-pala and a dik-pala is assured in the Ramayana, but in the Mahabharata, some lists do not include Kubera. Thus, Kubera is considered a later
addition to the original list of Loka-palas, where the gods Agni or Soma appear in his place. This status, the Ramayana records, was granted to Kubera by Brahma-
the creator-god and father of Pulastya—as a reward for his severe penance. Brahma also conferred upon Kubera the riches of the world (Nidhis), "equality with gods",
and the Pushpaka Vimana, a flying chariot. Kubera then ruled in the golden city of Lanka, identified with modern-day Sri Lanka. The Mahabharata says that
Brahma conferred upon Kubera the lordship of wealth, friendship with Shiva, godhood, status as a world-protector, a son called Nalakubera/Nalakubara, the Pushpaka Vimana and the lordship of the Nairrata demons.

Both the Puranas and the Ramayana feature the half-blood siblings of Kubera. Vishrava, Kubera's father, also married the Rakshasa (demon) princess Kaikesi, who
mothered four Rakshasa children: Ravana, the chief antagonist of the Ramayana, Kumbhakarna, Vibhishana and Soorpanaka. The Mahabharata regards Vishrava as
the brother of Kubera, so Kubera is described as the uncle of Ravana and his siblings. It records that when Kubera approached Brahma for the favour of superseding his father Pulastya, Pulastya created Vishrava. To seek the favour of Vishrava, Kubera sent three women to him, by whom Vishrava begot his demon children. Ravana, after acquiring a boon of Brahma, drove Kubera away from Lanka and seized his Pushpaka Vimana, which was returned to Kubera after Ravana's death. Kubera then settled on Gandhamandana mountain, near Mount Kailash — the cosmological abode of the god Shiva-in the Himalayas. Sometimes, Kailash itself is called Kubera's residence. His city is usually called Alaka or Alaka-puri ("curl-city"), but also Prabha ("splendour"), Vasudhara ("bejeweled") and Vasu-sthali ("abode of treasures").

There, Kubera had a grove called Caitraratha, where the leaves were jewels and the fruits were girls of heaven. There is also a charming lake called Nalini in the grove.  Kubera is often described as a friend of Shiva in the epics. The Padma Purana says that Kubera prayed to Shiva for many years, and Shiva granted him the kingship of Yakshas.

A description of Kubera's magnificent court appears in the Mahabharata as well as the Meghaduta. Here, Gandharvas and Apsaras entertain Kubera. Shiva and his wife
Parvati often frequent Kubera's court, which is attended by semi-divine beings like the Vidyadharas; Kimpurushas; Rakshasas; Pishachas; as well as Padma and Shankha;
personified treasures (nidhi); and Manibhadra, Kubera's chief attendant and chief of his army. Like every world-protector, Kubera has seven seers of the North in
residence. Alaka is recorded to be plundered by Ravana once, and attacked by the Pandava prince, Bhima once. Kubera's Nairrata army is described to have defeated king Mucukunda, who then defeated them by the advice of his guru Vashishta. Shukra, the preceptor of the demons, is also recorded to have defeated Kubera and stolen his wealth. Another major tale in the scriptures records how Kubera entertained the sage Ashtavakra in his palace.

Kubera is the treasurer of the gods and overlord of the semi-divine Yakshas, the Guhyakas, Kinnaras and Gandharvas, who act as his assistants and protectors of the
jewels of the earth, as well as guardians of his city. Kubera is also the guardian of travelers and the giver of wealth to individuals, who please him. The Rakshasas also
serve Kubera, however, some cannibalistic Rakshasas are described to have sided with Ravana in the battle against Kubera. Kubera also developed as minor
marriage-divinity. He is invoked with Shiva at weddings and is described as Kameshvara ("Lord of Kama – pleasure, desire etc."). He is associated with fertility of the aquatic type.

The Puranas and the Mahabharata record that Kubera married Bhadra ("auspicious"), or Kauberi ("wife of Kubera"), daughter of the demon Mura. She is also called Yakshi
– a female Yaksha and Charvi ("splendour"). They had three sons: Nalakubara ("Reed-axle"), Manigriva ("Bejewled-neck") or Varna-kavi ("Colourful poet"), and Mayuraja ("king of animals resembling men"); and a daughter called Minakshi ("fish-eyed"). The Mahabharata calls his wife Riddhi ("prosperity") and Nalakubara his son.

The goddess of wealth Lakshmi is sometimes described as his consort.

Worship
As the treasurer of the riches of the world, Kubera is prescribed to be worshipped. Kubera also credited money to the god Venkateshwara (a form of the god Vishnu) for
his marriage with Padmavati. In remembrance of this, the reason devotees go to Tirupati to donate money in Venkateshwara's Hundi ("Donation pot"), is so that he can
pay it back to Kubera. Kubera is worshipped with Lakshmi, the goddess of wealth during Diwali, which is primarily dedicated to her – usually on the Dhanteras day.
While Kubera still enjoys prayers as the god of wealth, his role is largely taken by the god of wisdom, fortune and obstacle-removal, Ganesha, with whom he is generally
associated.