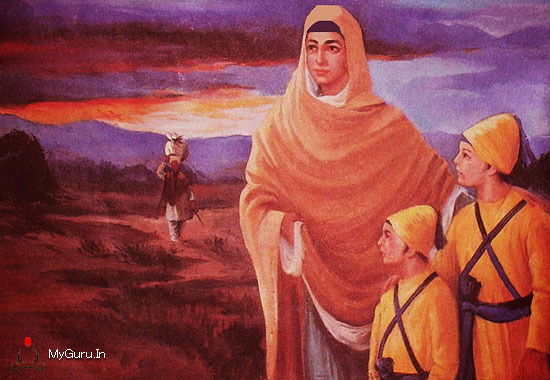 Mata Gujri Ji (1624–1705) was the married to (4 February 1633) Guru Tegh Bahadur , the ninth Guru of Sikhism, and the mother of Guru Gobind Singh, the tenth Guru of Sikhism. She is considered to be one of the prominent figures in history of Sikhism.
Mata Gujri was born in Sikh Gurjar family as the daughter of Bhai Lal Chand Subulikka of Kartarpur, in Kapurthala district of the Punjab.

History
Mata Gujri and her younger Grandsons Sahibzada Fateh Singh and Sahibzada Zorawar Singh sought shelter with a servant of Guru Gobind Singh called Gangu, a priest by profession and Brahmin by caste. Gangu(Brahmin) betrayed them by telling the Mughals where Mata Gujri and her grandchildren were staying. Mata Gujri was murdered along with her two younger sons, under the command of the Mughal ruler Aurangzeb for refusing to convert to Islam. Mata Gujri was ordered to lay on an ice block and her grandchildren were bricked alive. While the younger Sahibzadey were being bricked alive they were reciting the holy Japji Sahib.