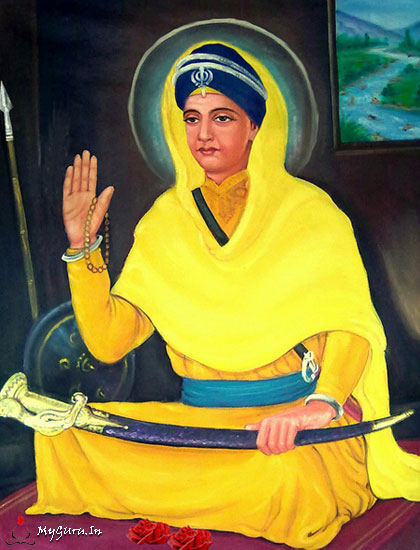 Guru Gobind Singh Ji upon hearing the wish of the Sikhs of Rohtas to accept Mata Sahib Deva as his bride reminded them that he had vowed to renunciate the life of a married man upon the passing of Mata Jeeto Ji, however on the love filled insistence of the sangat Guru Gobind Singh Ji agreed on two terms,

2) Mata Sahib Deva would have to take Amrit citation needed. The sangat rejoiced at the news and the Anand Karaj was preformed after Mata Ji's baptism.


It was some time after their marriage that Mata Sahib Kaur Ji was declared as the mother of all the baptised Sikhs (the Khalsa), as she wished to have a child of her own, to which the Guru answered and fulfilled her wish by placing the holy Khalsa in her lap.

During the battle of Anandpur Sahib Mata Sahib Kaur Ji was split from the holy family of the tenth Guru during the siege of Fort Keshgarh where along with Mata Sundari Ji they were escorted to safety to Sri Damdama Sahib by Bhai Sahib Bhai Mani Singh Ji Shaheed.

Mata Sahib Kaur Ji accompanied Guru Gobind Singh Ji to Delhi and then on to Nanded whilst Mata Sundari Ji stayed back in Delhi.

It was in Nanded that Guru Gobind Singh Ji informed Mata Ji of his time to leave Earth for his heavenly abode at which he commanded Mata Ji to leave for Delhi to be with Mata Sundari Ji, Guru Ji gave Mata Sahib Kaur Ji 5 weapons as his reminder and his Insignia (with which Mata Ji issued 9 Hukkamnaama's or Letters of Command for the Khalsa).Mata Sahib Kaur Ji resided in Delhi with Mata Sundari Ji and lived a life of Simran and Seva (selfless service) for the panth (nation).

In 1747 at the age of 66 Mata Sahib Kaur Ji renounced her body and left for her heavenly abode. The place of Mata Ji's cremation is Gurdwara Bala Sahib Ji, the same place where Sri Guru Harkrishan Sahib Ji was cremated.
Ringtones
» Download Free Ringtones
Vastu Tips