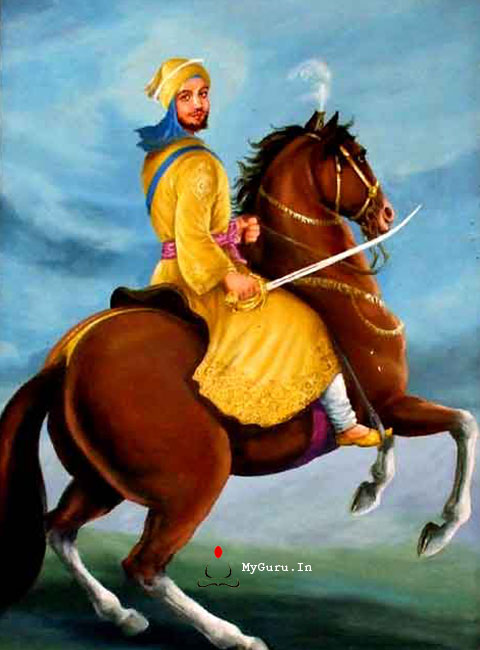 Sahibzada Ajit Singh Ji (1687–1705) was the eldest of Guru Gobind Singh\\\'s four sons. His younger brothers were Sahibzada Jujhar Singh, Sahibzada Zorawar Singh and Sahibzada Fateh Singh. With his three brothers, Sahibzada Ajit Singh Ji carried on a family tradition: that of attaining the status of one of the most hallowed martyrs in Sikh history. Before him and his brothers, their grandfather, the Ninth Sikh Guru Ji, Guru Tegh Bahadur and his great-great grandfather, the Fifth Sikh Guru Ji, Guru Arjan Dev had also been executed by the Mughals.

Early life
Sahibzada Ajit Singh Ji was born to Mata Sundari and Guru Gobind Singh Ji at Paonta Sahib on 26 January 1687. The following year, Guru Gobind Singh Ji returned with the family to Anandpur where Sahibzada Ajit Singh Ji was brought up in the approved Sikh style. He was taught religious texts, philosophy and history, and had training in the manly arts such as riding, swordsmanship and archery. He grew up into a handsome young man; strong, intelligent and a natural leader of men.

Battles
the Ranghars of Nuh
Soon after the creation of the Khalsa on 13 April 1699, he had his first test of skill. A Sikh Congregation (\\\'Sangat\\\') coming from the Pothohar region of northwest Punjab, was attacked and looted on the way by the Ranghars (a Muslim tribe) of Nuh, a short distance from Anandpur across the River Satluj. Guru Gobind Singh Ji sent Sahibzada Ajit Singh Ji, then barely 12 years old, to that village. Sahibzada Ajit Singh Ji along with a 100 men reached the spot on 23 May 1699, punished the Ranghars and recovered the looted property.

Taragarh and Nirmohgarh
A harder task was entrusted to Sahibzada Ajit the following year when the hill chiefs supported by imperial Mughal troops from Lahore and Sirhind attacked Anandpur. Sahibzada Ajit Singh was made responsible for the defence of the Taragarh Fort, which became the first target of attack on 29 August 1700. Ajit Singh, assisted by Bhai Udai Singh, a seasoned soldier, repulsed the attack. He also fought valiantly in the battle of Nirmohgarh in October 1700. On 15 March 1701, a Sikh Sangat coming from the Darap area (near Sialkot) was waylaid by Gujjars and Ranghars. Sahibzada Ajit Singh led a successful expedition against them.

Restoring a Brahmin\\\'s wife
In March 1703, Dewki Das, a Brahmin came to Anandpur and requested the Guru to help him in getting back his wife whom Chowdhry Jabar Khan, the chief of Dera Bassi, had taken away forcibly; the Guru asked Sahibzada Ajit Singh and Bhai Udey Singh to help the Brahmin. On the 7th of March 1703, both of them, joined by about one hundred Sikhs, went to Dera Bassi; they put siege to the town and sent a message to Jabar Khan to return the Brahmin\\\'s wife; but Jabar Khan, instead of returning the Brahmin’s wife, asked his soldiers to attack the Sikh; it was followed by a full-fledged battle, in which Jabar Khan was killed; the Brahmin\\\'s wife was restored to him. When this news reached the people, they praised the Sikhs for their role.

Marriage of Sahibzada Ajit Singh
According to Bhatt Vahi Purabi Dakhanni, in December 1704, Bhai Jetha Singh of Burhanpur and his wife Lachhmi Kaur and daughter Tara Kaur (Tara Bai before initiation) visited Anandpur Sahib. One day, Tara Kaur went to the river along with her companions and saw Sahibzada Ajit Singh having a bath there; she was so much fascinated that she wanted to marry him; and when she came back, she talked to her mother, who further met Mata Gujri and conveyed the wish of her daughter. Mata Gujri discussed it with the Guru, Mata Sunder Kaur and the Sahibzada; all of them agreed and the marriage was performed on the 15th of January 1705. To quote the Bhatt Vahi: “Ajit Singh son of Guru Gobind Singh Mahal tenth, grandson of Guru Tegh Bahadur Ji, great-grandson of Guru Hargobind Ji, descendants of Guru Arjan Ji, Surajbansi caste Sodhi Khatri, resident of Anandpur, pargana Kehlur, was married to Tara Bai daughter of Jetha Singh, at Anandgarh, on Magh Sudi one, 1761.”
According to this Bhatt Vahi, a son was born to the Sahibzada on the 9th of December 1705, at Agra. The child was named Hatthi Singh: “Hatthi Singh son of Ajit Singh, grandson of Guru Gobind Singh Mahal tenth, great-grandson of Guru Tegh Bahadur Ji, descendant of Guru Hargobind Ji, Surajbansi, caste Sodhi Khatri, residence of Anandpur, pargana Kehlur, was born at the residence of Sardha Singh Gulati son of Mohkam Das Gulati, at Agra, pargana Mathra, on Posh Sudi fifth, 1762.”
Some writers hesitate to accept Hatthi Singh as grandson of Guru Gobind Singh. They do so because a poet had written a poem which said that the Guru had sacrificed his \\\'sarbans (whole family), hence a grandson should not be mentioned (and they present Hatthi Singh as son of Ajit Singh Palit). The marriage of Sahibzada Ajit Singh and birth of his son has been narrated in detail, by Swarup Singh Kaushish in his book Guru Kian Sakhian. Koer Singh has also mentioned it in his work Gur Bilas Patshahi Dasvin. Kesar Singh Chhibber too has referred to this marriage in his book Bansawlinama Dasan Patsahian Da. but we cannot say surely that Sahibzada Ajit Singh ji has got married.In his last war guru himself has send his both son\\\'s in the battle in the dress of groom because he himself know that they will not come back after this battle.

Chamkaur, Sahibzada Ajit Singh\\\'s Final Battle
When Mughal forces besieged Anandpur in 1705, Sahibzada Ajit Singh again displayed his qualities of courage and steadfastness. After a long stalemate, the Mughal Faujdar gave his assurances that he only wanted the fort of Anandpur and would let the population of the town go unharmed. Anandpur was vacated on the night of 3–4 December 1705. Sahibzada Ajit Singh was given the command of the rearguard. As the besiegers, violating their solemn promises, attacked the column, he stoutly engaged them on a hill-feature called Shahi Tibbi until he was relieved by Bhai Udai Singh. Ajit Singh crossed the Sarsa, then in space, along with his father, younger brother, Jujhar Singh, and some fifty men. Further reduced in numbers by casualties at the hands of pursuing troops from Ropar, the column reached Chamkaur on the evening of 6 December 1705, and took up position in a garhi (a stockade) and prepared for a fight to the finish. The host, since swelled by reinforcements from Malerkotla and Sirhind and from among the local Ranghars and Gujjars, soon caught up with them and threw a tight ring around Chamkaur. An unequal but grim battle commenced with the sunrise on 7 December 1705 - in the words of Guru Gobind Singh\\\'s Zafarnamah, a mere forty defying thousands. The besieged, after they had exhausted the meager stock of ammunitions and arrows, made sallies in batches of five each to engage the encircling host with sword and spear.
Sahibzada Ajit Singh led one of the sallies and laid down his life fighting in the thick of the battle. Gurdwara Qatalgarh now marks the spot where he fell, followed by Sahibzada Jhujhar Singh who led the next sally. An annual fair is held in the commemoration of their martyrdoms in December - January.

Commemoration
Ajitgarh, one of the largest cities in Punjab lying adjacent to its capital Chandigarh, has been named in the memory of Sahibzada Ajit Singh, Ajitgarh (\\\'Home of Ajit\\\'). It is located in the district of the state which is also named after him Sahibzada Ajit Singh Nagar District.