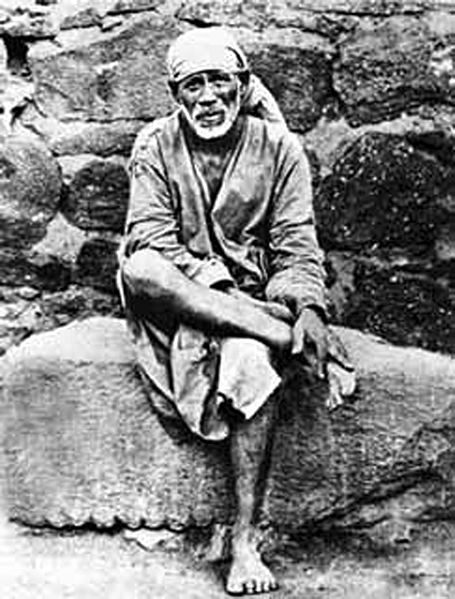 Sai Baba Ji Ke E-Greetings
Sai Baba of Shirdi, also known as Shirdi Sai Baba, was an Indian guru, yogi, and fakir who is regarded by his Hindu and Muslim devotees as a saint. Many Hindu devotees - including Hemadpant, who wrote the famous Shri Sai Satcharitra - consider him an incarnation of Lord Krishna while other devotees consider him as an incarnation of Lord Dattatreya. Many devotees believe that he was a Satguru, an enlightened Sufi Pir, or a Qutub. No verifiable information is available regarding Sai Baba's birth and place of birth.

Sai Baba's real name is unknown. The name "Sai" was given to him upon his arrival at Shirdi, a town in the west-Indian state of Maharashtra. Mahalsapati, a local temple priest, recognized him as a muslim saint and greeted him with the words 'Ya Sai!', meaning 'Welcome Sai!'. Sai or Sayi is a Persian title given to Sufi saints, meaning 'poor one'. However Sai may also refer to the Sanskrit term "Sakshat Eshwar" or the divine. The honorific "Baba" means "father; grandfather; old man; sir" in Indo-Aryan languages. Thus Sai Baba denotes "holy father", "saintly father" or "poor old man".

Sai Baba remains a very popular saint, especially in India, and is worshipped by people around the world. He is claimed to have had no love for perishable things and his sole concern was self-realization. He taught a moral code of love, forgiveness, helping others, charity, contentment, inner peace, and devotion to God and guru. Sai Baba's teaching combined elements of Hinduism and Islam: he gave the Hindu name Dwarakamayi to the mosque he lived in, practiced Hindu and Muslim rituals, taught using words and figures that drew from both traditions, and was buried in Shirdi. One of his well known epigrams, "Sabka Malik Ek " ("One God governs all"), is associated with Islam and Sufism. He always uttered "Allah Malik" ("God is King").

Some of Sai Baba's disciples became famous as spiritual figures and saints, such as Mhalsapati, a priest of the Khandoba temple in Shirdi, and Upasni Maharaj. He was revered by other saints, such as Saint Bidkar Maharaj, Saint Gangagir, Saint Janakidas Maharaj, and Sati Godavari Mataji. Sai Baba referred to several saints as 'my brothers', especially the disciples of Swami Samartha of Akkalkot.


Historians and devotees agree that there is no reliable evidence for a particular birthplace or date of birth. Various communities have claimed that he belongs to them, but nothing has been substantiated. It is known that he spent considerable periods with fakirs, and his attire resembled that of a Muslim fakir.

Little has been officially documented on the early life of Shirdi Sai Baba. An account of Shirdi Sai's missing childhood years has been reconstructed by his disciple Das Ganu, after researching in the area around the village of Pathri. He collected this story in four chapters on Sai Baba, later also called the Sri Sai Gurucharitra. Das Ganu states that Sai Baba grew up in Pathri, with a fakir and his wife. At the age of five, says Das Ganu, the fakir's wife put him in the care of the saintly desmukh Venkusha, where the boy stayed several years. Dasganu calls the young Sai Baba the reincarnation of Kabir. Because Das Ganu was known to take poetic liberties when telling stories about Sai Baba, and as there are no other sources to corroborate this story, it usually is left out of biographies of Sai Baba of Shirdi.

The above mentioned account is largely overlapped by the narration by Sathya Sai Baba, although Sathya Sai Baba states that the fakir and his wife adopted the baby that was to become Sai Baba shortly after his birth. However, Sathya Sai Baba's stories are not considered credible by most of Shirdi Sai Baba's biographers.

According to the book Sai Satcharita, Sai Baba arrived at the village of Shirdi in the Ahmednagar district of Maharashtra, British India, when he was about 16 years old. He led an ascetic life, sitting motionless under a neem tree and meditating while sitting in an asana. The Shri Sai Satcharita recounts the reaction of the villagers:

The people of the village were wonder-struck to see such a young lad practicing hard penance, not minding heat or cold. By day he associated with no one, by night he was afraid of nobody.

His presence attracted the curiosity of the villagers, and he was regularly visited by the religiously inclined, including Mhalsapati, Appa Jogle and Kashinatha. Some considered him mad and threw stones at him. Sai Baba left the village, and little is known about him after that. However, there are some indications that he met with many saints and fakirs, and worked as a weaver. He claimed to have fought with the army of Rani Lakshmibai of Jhansi during the Indian Rebellion of 1857. It is generally accepted that Sai Baba stayed in Shirdi for three years, disappeared for a year, and returned permanently around 1858, which suggests a birth year of 1838.


In 1858 Sai Baba returned to Shirdi. Around this time he adopted his famous style of dress consisting of a knee-length one-piece robe (kafni) and a cloth cap. Ramgir Bua, a devotee, testified that Sai Baba was dressed like an athlete and sported 'long hair flowing down to the end of his spine' when he arrived in Shirdi, and that he never had his head shaved. It was only after Baba forfeited a wrestling match with one Mohdin Tamboli that he took up the kafni and cloth cap, articles of typical Sufi clothing. This attire contributed to Baba's identification as a Muslim fakir, and was a reason for initial indifference and hostility against him in a predominantly Hindu village. According to B.V. Narasimhaswami, a posthumous follower who was widely praised as Sai Baba's "apostle", this attitude was prevalent up to 1854 even among some of his devotees in Shirdi.

For four to five years Baba lived under a neem tree, and often wandered for long periods in the jungle around Shirdi. His manner was said to be withdrawn and uncommunicative as he undertook long periods of meditation. He was eventually persuaded to take up residence in an old and dilapidated mosque and lived a solitary life there, surviving by begging for alms, and receiving itinerant Hindu or Muslim visitors. In the mosque he maintained a sacred fire which is referred to as a dhuni, from which he gave sacred ashes ('Udhi') to his guests before they left. The ash was believed to have healing and apotropaic powers. He performed the function of a local hakim, and treated the sick by application of ashes. Sai Baba also delivered spiritual teachings to his visitors, recommending the reading of sacred Hindu texts along with the Qur'an. He insisted on the indispensability of the unbroken remembrance of God's name (dhikr, japa), and often expressed himself in a cryptic manner with the use of parables, symbols and allegories.

Sai Baba participated in religious festivals and was also in the habit of preparing food for his visitors, which he distributed to them as prasad. Sai Baba's entertainment was dancing and singing religious songs.

After 1910 Sai Baba's fame began to spread in Mumbai. Numerous people started visiting him, because they regarded him as a saint with the power of performing miracles, or even as an Avatar. They built his first temple at Bhivpuri, Karjat.

Sai Baba encouraged his devotees to pray, chant God's name, and read holy scriptures. He told Muslims to study the Qur'an, and Hindus to study texts such as the Ramayana, Bhagavad Gita, and Yoga Vasistha. He advised his devotees and followers to lead a moral life, help others, love every living being without any discrimination, and develop two important features of character: faith (Shraddha) and patience (Sabr). He criticized atheism. In his teachings, Sai Baba emphasized the importance of performing one's duties without attachment to earthly matters, and of being content regardless of the situation.

Sai Baba encouraged charity, and stressed the importance of sharing. He said: "Unless there is some relationship or connection, nobody goes anywhere. If any men or creatures come to you, do not discourteously drive them away, but receive them well and treat them with due respect. Shri Hari (God) will certainly be pleased if you give water to the thirsty, bread to the hungry, clothes to the naked, and your verandah to strangers for sitting and resting. If anybody wants any money from you and you are not inclined to give, do not give, but do not bark at him like a dog." Other favorite sayings of his were: "Why do you fear when I am here", and "He has no beginning... He has no end."

Sai Baba made twelve assurances to his devotees:
1. Whosoever puts their feet on Shirdi soil, their sufferings will come to an end.
2. The wretched and miserable will rise to joy and happiness as soon as they climb the steps of [the mosque] Dwarakamayi.
3. I shall be ever active and vigorous even after leaving this earthly body.
4. My tomb shall bless and speak to the needs of my devotees.
5. I shall be active and vigorous even from my tomb.
6. My mortal remains will speak from my tomb.
7. I am ever living to help and guide all who come to me, who surrender to me, and who seek refuge in me.
8. If you look at me, I look at you.
9. If you cast your burden on me, I shall surely bear it.
10. If you seek my advice and help, it shall be given to you at once.
11. There shall be no want in the house of my devotee.
12. If you take a step towards me, I will take 100 steps towards you