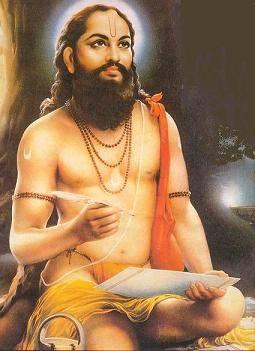 The birth name of Samartha Ramdas Swami was Narayan Suryaji Thosar. He was born on 'Ramnavami' in the year 1530 (Marathi), (1608 AD) in Jamb village on the banks of Godavari river. He was a firm believer in God and stood by his principles. He felt sad because people got stuck in the unending cycle of life and death. At the age of 11, he attained enlightenment. Lord Ram told him, "Go to the banks of the river Krishna and start a new sect".

Narayan reluctantly agreed to marry to satisfy his mother's wishes. He was 12 years of age, but as soon as he heard the word 'Savadhan' (Caution) in the wedding vows, he became cautious and ran away! He went straight to Panchavati and prayed to Lord Ram. Then he went to Takli village near Nashik, where rivers Godavari and Nandini meet.

He would wake up before sunrise and exercise. His exercise used to consist of  'Surya Namaskars', a series of positions each of which involved prayers to the Sun. He used to stand in chest deep water in the river and chant "Shri Ram Jai Ram Jai Jai Ram". Chanting used to continue until noon. In afternoon he used to go to Lord Ram's temple in the forest and read spiritual books. In evening he used to attend lectures on spirituality and songs praising Lord Ram. At night he listened to 'Bhajans' (devotional songs). He used to pray to Lord Ram before retiring. He followed this routine for 12 years. As a result of his devotion, Lord Ram appeared before him and asked him to start a new sect. Soon people forgot his original name 'Narayan'and started calling him 'Samartha Ramdas'. Ramdas means loyal devotee of Lord Ram.

In the Marathi year 1554 (1632 AD), he left Takli to start his spiritual journey. For next 12 years, he crisscrossed India and minutely observed condition of people. He realized that frequent floods, famines and attacks by fanatics had destroyed social life of people. Everyone was scared and depressed. Based on his experiences he wrote 2 books named "Asmani Sultani" and "Parachakraniroopan".

Ramdas Swami felt bad when he saw the society depending so much on fate and providence. In Marathi year 1566 (1644 AD) Samartha Ramdas Swami chose 'Chafal' for initiating his mission. He installed a statue of Lord Ram and started celebrating the festival of Ram 'Janmotsava' (Birth of Lord Ram). He established temples of Hanuman in towns and villages to convey importance of exercise to youth and taught them to get together and fight the enemy. He highlighted warrior's role in society. Samartha Ramdas Swami established many study centres across the country. His teaching of patience and faith in the face of adversities helped people to deal with difficult conditions.

He understood the importance of the role of women in a harmonious society. He encouraged women to participate in religious work and gave them positions of authority. He had 18 staunch women disciples. Wennabai took care of the study centre at Miraj, Akkabai took charge of Chafal and Sajjangad. He strongly reprimanded an old man who was against women participation by saying that everyone came from a woman's womb and those who did not understand their importance were not worthy of being called a man.

He abhorred distinction based on caste and creed. According to him, all human beings are equal. He was a true supporter of socialism and secular society.

Samartha Ramdas Swami left for his heavenly abode on the 9th day of Magh in 1603 (1681 AD) at Sajjangad.

His contribution to the field of literature is unparalleled. 'Dasbodh' , 'Manache Shlok' , ' Atmaram', 'Manapanchak' , 'Anandavanbhuvan',  'Shivakalyanaraja' and many more are relevant even today. Like a light house his teachings are guiding force in today's troubled times.