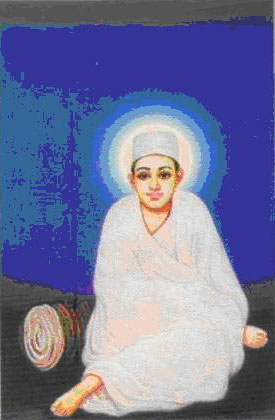 Dadu Dayal ji Maharaj was found by an affluent business man floating on the river Sabarmati. He later moved to Amber (city), near Jaipur Rajasthan, where he preached his teachings.

He gathered around himself a group of followers, which became known as the Dadu-panth.

This organization has continued in Rajasthan to the present-day, and has been a major source of early manuscripts containing songs by the North Indian saints.

Dadu's compositions were recorded by his disciple Rajjab and are known as the Dadu Anubhav Vaani, a compilation of 5,000 verses. Another disciple, Janagopal, wrote the earliest biography of Dadu.

Dadu ji had 100 disciples that followed his teachings and attained salvation. He instructed an additional 52 disciples to set up ashrams, 'Thambas' around the region to spread the Lord's word. Dadu ji spent the latter years of his life in Narayana, a small distance away from the town of Dudu, near Jaipur city.

Five thambas are considered sacred by the followers, namely, Narayana, Bhairanaji, Sambhar, Amer, and Karadala (Kalyanpura). Followers of these thambas then spread and set up other places of worship.

Shri Dadu Dham Bhairana, which lies in the secluded hilly tract of Bichoon district in the Jaipur division of Rajasthan, has become a sacred place of pilgrimage for lakhs of devotees of Saint Dadu Dayal Ji Maharaj from Haryana. The devotees come from Punjab, Himachal Pradesh, Delhi, Uttar Pradesh, Madhya Pradesh, Gujarat, Maharashtra and other parts of the country. They hold the place in reverence. The remaining part of the story relating to the

eternal importance of Bhairana in the life of Daduji Maharaj can now be told.

The ancient Bhairana hill, which is situated amidst exquisite natural surroundings, has been the hermitage of many saints and seers since times immemorial. It is said that at the pressing solicitations of Uddhava Bhagat, a prominent resident of Bhairana, on one occasion Daduji Maharaj himself made a brief visit to Bhairana during which time he

intuitively and instantly realised the spirit of the adorable sanctity of this ancient abode of saints. Later at the time of his departure from the world in 1603, Daduji instructed his disciple-saints at Naraina thus: “After my demise, take my body to the Bhairana hill and then leave it there at the spot in its deep gorge. Hence forward, it shall be known as our

sanctum-sanctorum and it shall continue to be a place of worship for saints and sadhus for all times to come in the future as well.”

Accordingly, when Dadu Ji Maharaj breathed his last on in 1603, his body was taken in a palanquin from Naraina to Bhairana and placed there in its gorge by thousands of his disciple-saints. When they were engaged in a discussion regarding the last rites to be performed, a supernatural incident is said to have occurred all of a sudden. Tila Ji, a

disciple-saint of Dadu Ji Maharaj, saw his guru standing at the gate of a cave near the hilltop. He brought it to the notice of others too. Instantly Daduji Maharaj spoke “Satya Ram” to all and then vanished into the cave. According to the legend and tradition, the palanquin also disappeared and only some flowers were left there. The devotees had to remain contented with performing the last rites with those flowers at that site where now stands a large memorial, which is sacred to the Dadu-panthis.

Dadupanth even today is a strong movement in the States of Gujarat, Rajasthan, Haryana and the adjoining regions. Daduji belongs to the lineage of Nirguna Sants like Kabir and Guru Nanak.