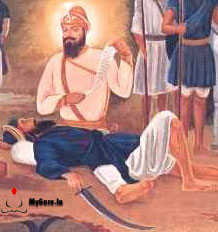 Maha Singh (1765–1792) upon the death of his father, Charat Singh, he succeeded to the leadership of the Sukerchakia Misl. His son Ranjit Singh succeeded him and established the Sikh Empire. He is known for his alliance with Jassa Singh Ramgarhia and for reducing the power of the Kanheya Misl.

Leadership of the Sukerchakia Misl
As the new leader of the Sukerchakia Misl he captured the Rohtas Fort from Nur ud-Din Bamezai, a general of Ahmad Shah Durrani. With the help of Jai Singh Kanheya he laid a four-month siege to Rasool Nagar and captured the city from Pir Mohammed, its Chattha leader. The reputation he gained as a result of the siege led to Sardars loyal to the Bhangi Misl defecting to him He continued to expand his territory and captured Pindi Bhattian, Sahiwal, Isakhel, Kotli Loharan, and Jhang. In 1784-5, He used a feud between rulers to raid Jammu, but because he gained a great degree of wealth without sharing or informing his partner Jai Singh Kanheya, Jai Singh refused his attempts to reconcile. Maha Singh then created an alliance with Jassa Singh Ramgarhia and defeated the Kanheya Misl at the Battle of Batala. During the Battle of Batala Jai Singh Kanheya\'s son and successor, Gurbaksh Singh Kanheya, was killed. His widow, Sada Kaur betrothed her daughter to Ranjit Singh, Maha Singh\'s Son. Sada Kaur would later succeed to the leadership of the Kanheya Misl and aided Ranjit Singh in his early victories. According to the Gujrat District gazetteer 1921 Maha Singh was one of the chiefs of the Chatha Jatt tribe.
In 1790, he died during the siege of Sodhra, which was being occupied by the Bhangi Misl.