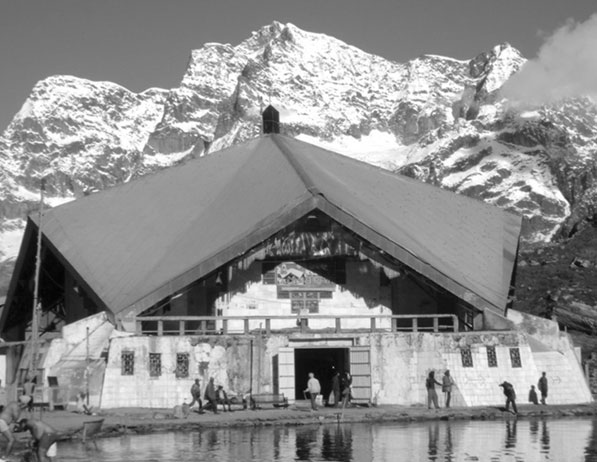 Hemkund Sahib is a Sikh place of worship Gurudwara, known as Gurudwara Sri Hemkunt Sahib Ji, devoted to Guru Gobind Singh Ji (1666–1708), the tenth Sikh Guru, which finds mention in Dasam Granth, a piece of work believed to be narrated by Guru Gobind Singh Ji, located in Chamoli district, Uttarakhand, India. With a setting of a glacial lake surrounded by seven mountain peaks and each peak adorned by a Nishan Sahib on its cliff, it is located in the Himalayas at an elevation of 4632 meters (15,200 ft) as per the Survey of India. It is approached from Gobindghat on the Rishikesh-Badrinath highway. The main town near Govindghat is Joshimath.

Etymology Hemkunt is a Sanskrit name derived from Hem ("Snow") and Kund ("bowl"). Dasam Granth says this is the place where Pandu Raja practiced Yoga.

Travel
Pilgrims going across the Hemkund Glacier to visit Gurudwara Sri Hemkund Sahib Hemkund is inaccessible from October through April because of snow bound paths and glaciers. Sikh pilgrims arrive in May and set to work to repair the damage to the path over the winter, which tradition is called kar seva a concept which forms an important tenet of the Sikh faith.

The take-off point for Hemkund Sahib is the town of Govindghat about 275 kilometres (171 mi) from Rishikesh. The 13 kilometres (8.1 mi) trek is along a reasonably well maintained path to the village of Ghangaria(also caled Govinddham). This path can be covered either by walk or by pony and a Gurudwara here gives shelter to pilgrims. In addition there are a few hotels and a campground with tents and mattresses. A 1,100-metre (3,600 ft)climb on a 6-kilometre (3.7 mi) of stone paved path leads Hemkund. Overnight stay is not allowed at Hemkund Sahib and so it is necessary to leave by 2 pm to make it back to Govindghat by nightfall.

From Delhi, tourists take the train to Haridwar and then travel by bus to Govindghat via Rishikesh. It is also possible to drive from Delhi to Govindghat, about 500 km and takes about 18 hours.

Valley of Flowers
About 3 km from Gobinddham is the 5 km long Valley of Flowers. The Indian Government has declared this valley a national park. It is situated in Nanda Devi Bio Reserve, and all activities are carefully regulated to preserve the valley in pristine condition. The best months to visit are July and August, during the monsoons. Legend has it that a flower called Brahma-Kamal blossoms here every 12 years. The trek to the valley is relatively easy and is a popular second destination for pilgrims visiting Hemkunt Sahib.