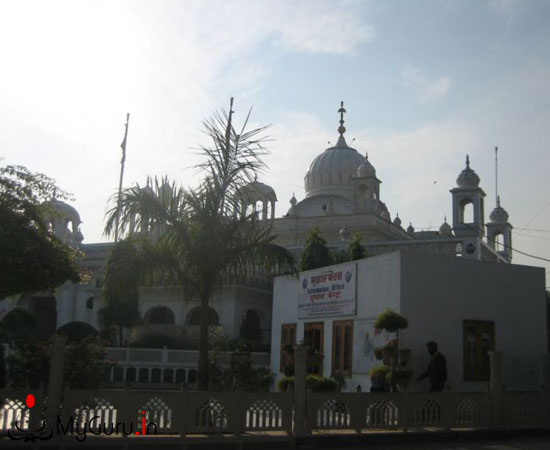 Gurdwara Killa Sahib: This Gurdwara Situated Khadur Sahib is a Village in The District of Amritsar, Punjab, India. This place was house of a weaver which was purchased later on by Guru Sahib. According to the Sakhi, Guru Amar Das Maharaj Ji brought water for sacred bath of Shri Guru Angand Dev Ji for twelve years from the river Beas at Goindwal Sahib. During this service of bringing water, Guru Amar Das Ji fell striking against the peg of the weaver. After hearing the noise of falling of Shri Guru Amar Das Ji, the weaver said “Who’s there?". The weaver's wife replied “Who else might be there. He might be the homeless Amroo" & spoke some objectionable words against Guru Angad Dev Maharaj Ji. Guru Amar Das Ji could not tolerate these words & said casually “Mad, you may say whatever you like against me but donot say anything against my Guru Sahib. The weaver's wife actually became mad & with the sacred touch of feet of Guru Sahib, the peg turned green & developed into a full grown "Kareer" tree. With time, the tree lost its life & till now it’s preserved in a frame for the devotees to pay tributes at this sacred place. Guru Amar Das Ji was crowned as Guru by Baba Budda Ji. Guru Angad Dev Ji gave twelve blessings and ordered ti installs the sacred town Goindwal Sahib as a place of service.