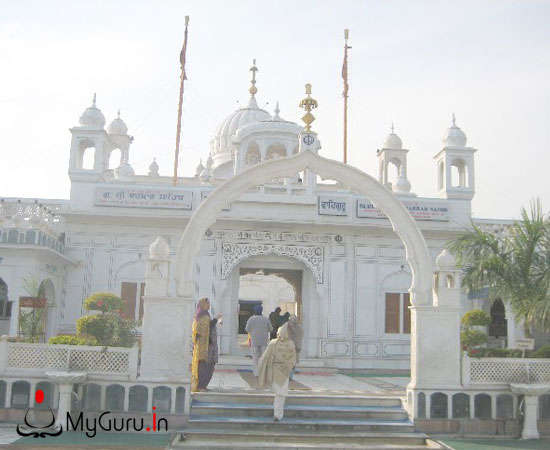 Gurudawara Angeeth Sahib: Khadur Sahib is a village in the district of Amritsar, Punjab, India. The village of Khadur Sahib is beside the Beas River about 38 kms from Amritsar, 20 Kms from Tarn Taran and nine kms from Goindwal. It is a historical fact that Shri Guru Angad Dev Ji Maharaj lived 13 years, spreading the universal message of Shri Guru Nanak Dev Ji. He left for heavenly abode at Khadur Sahib after performing many great religious, social & cultural activities. The place where GURU'S last sacred rites were performed is given the name of Angeeth Sahib Paatshahi Dooji. It is a historical fact that the Eight Gurus by their visit to Khadur Sahib, made this town of great historical importance.
Here he introduced Gurmukhi Lipi, wrote the first Gurmukhi Primer, established the first Sikh school and prepared the first Gutka of Guru Nanak Sahib’s Bani. It is the place where the first Mal Akhara, for wrestling, was established and where regular campaigns against intoxicants and social evils were started by Guru Angad. The Stately Gurdwara here is known as The Guru Angad Dev Gurdwara.

The Siva of Amar Das
The grand Gurdwara at Khaddi Sahib was constructed in memory of Guru Amar Das. On the spot where the Gurdwara now stands, was once located a knaddi (loom) of a cloth weaver. One dark night Guru Amar Das stumbled into the weaver's pit, while carrying a pitcher of water on his head. He was fetching water from the river Beas at a distance of 10 km, for his Guru, Guru Angad Dev. Despite his fall, he succeeded in saving the water filled pitcher. The noise of the fall awakened the weaver who suspected a thief. When the weaver's wife heard a voice uttering 'Japji' she told her husband that it was no thief but the poor, homeless Amar, the aged servant of Guru Angad. When the incident came to the notice of Guru Angad, he was pleased to remark, "Amar Das was not homeless and lowly. He shall be the home of the homeless, and honour of the unhonoured, the strength of the strengthless, the support of the unsupported, the shelter of the shelterless, the protector of the unprotected, and the emancipator of the captives." Guru Angad then formally held the investiture ceremony and appointed Guru Amar Das as his successor, the third Guru Nanak.