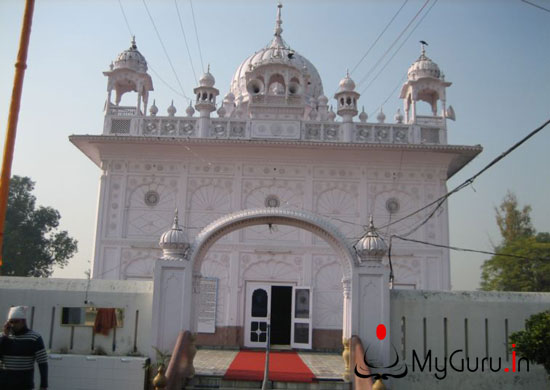 Gurdwara Shri Plaha Sahib is situated in the Village Khairabad, Amritsar. Now days surrounded with modern houses and extended limits of Amritsar City. The 6th Sikh master Shri Guru Hargobind Sahib Ji was a saint and a great warrior, who fought several wars against the Mughals.
It is said Mughal Emperor Shah Jahan came hunting to a forest when Guru Har Gobind Ji was also present. The falcon of the emperor started fighting with the falcon of Guru Hargobind Singh at Guru's camp. The reason for first battle of Sikh history came into existence here only.
It was here on May 1628, about 500 Sikhs led by Bhai Bidhi Chand, Praana and Pande Khan faced the strong Mughal Army of 5,000 soldiers. Mughal forces had to retreat after the Gulam Rasool Khan and other two commanders died. Guru Har Gobind Sahib Ji was victorious.
In 1628, when Guru Sahib came here for hunting with Sikhs, Shahjahan was also here for same purpose near Gumtala. Singh's saw that One Hawk (Baaz) was killing his prey very cruely. And this Hawk (Baaz) was of King Shahjahan. Singhs sent there own Hawk and captured the royal Hawk. When royal army of Shahjahan came to know about this incident they tried to threat sikhs and asked for royal hawk. But singhs denied to give it. Royal army warned them of Battle but Sikhs replied "Tusi Baaz Di gal Karde ho asi tuhade Taaz nu Hath Pawange". Royal army went back and explained the whole story to ShahJahan. In result of this Shahjahan sent Royal army under the command of Mukhalas Khan. And first battle of Sikh history was fought at Pipli Sahib where Mukhalas Khan was killed.