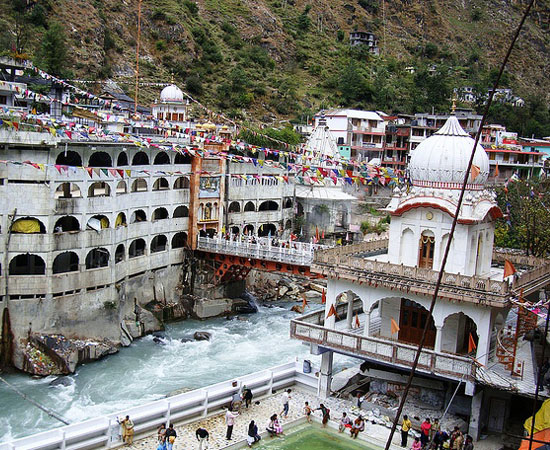 Manikaran is located in the Parvati Valley between the rivers Beas and Parvati, northeast of Bhuntar in the Kullu District of Himachal Pradesh. It is at an altitude of 1760 m and is located about 45 km from Kullu.
This small town attracts tourists visiting Manali and Kullu to its hot springs and pilgrim centres. An experimental geothermal energy plant has also been set up here.

Manikaran Gudwara is located in Manali. Guru Nanak Dev Ji visisted this place in 15 Asu 1574 along with his disciples Bhai Mardana and Bhai Bala. The Gurdwara is situated in the height of mountains of manali and has very beautiful scenic beauty. It is also considered as the first place where the first guru, Guru Nanak Dev Ji first mediated through his journey. The autobiography of Bhai mardana also refers the miracles done here by the Guru Ji. The Gurdwara has many tourist attractions all over the year and is must visit place.

Religious centre
Manikaran is a pilgrimage centre for Hindus and Sikhs. The Hindus believe that Manu recreated human life in Manikaran after the flood, making it a sacred area. It has many temples and a gurudwara. There are temples of the Hindu deities Rama, Krishna, and Vishnu. The area is well known for its hot springs and its beautiful landscape.
According to legend, when the Hindu God Shiva and his consort Parvati were walking in the valley, Parvati dropped one of her earrings. The jewel was seized by Shesha, the serpent deity, who then disappeared into the earth with it. Shesha only surrendered the jewel when Shiva performed the cosmic dance, the Tandava and shot the jewel up through the water. Apparently, jewels continued to be thrown up in the waters at Manikaran until the earthquake of 1905.

Sikh belief
According to the Sikhs, during third Udasi, his founder Guru Nanak came to this place in 15 Asu 1574 Bikrami with his disciple Bhai Mardana. Mardana felt hungry and they had no food. Nanak sent Mardana to collect food for the langar (the Community Kitchen). Many people donated atta (flour) to make Roti(bread). The one problem was that there was no fire to cook the food. Nanak asked Mardana to lift a stone and he complied and a hot spring appeared. As directed by Nanak, Mardana put the rolled chappatis in the spring to his despair the chappatis sank. Nanak then told him to pray to God saying that if his chappatis float back then he would donate one chappati in His name. When he prayed all the chappatis started floating duly baked. Nanak said that anyone who donates in the name of God, his drowned items float back.

Hindu belief
The legend of Manikaran states that while roaming around, Lord Shiva and Goddess Parvati, once chanced upon a place that was surrounded by mountains and was lush green. Enamoured by the beauty of the place, they decided to spend some time there. It is believed that they actually spent eleven hundred years here.
During their stay here, Goddess Parvati lost her mani in the waters of a stream. Upset over the loss, she asked Shiva to retrieve it. Lord Shiva commanded his attendant to find out the mani for Parvati, however, when they failed, he was extremely angry. He opened his third eye, a tremendously inauspicious event which led to disturbances in the universe. An appeal was made before the serpent god, Sheshnag, to pacify Lord Shiva. Sheshnag hissed thereby giving rise to a flow of boiling water. The water spread over the entire area resulting in the emergence of precious stones of the type Goddess Parvati had lost. Lord Shiva and Goddess Parvati were happy at the outcome.
The name Manikaran is derived from this legend. The water is still hot and is considered extremely auspicious. A pilgrimage to this place is thought of as complete. It is also believed that there is no need to pay a visit to Kashi after visiting this place. The water of the spring is also supposed to have curative powers. The water is so hot that rice can be cooked in it.