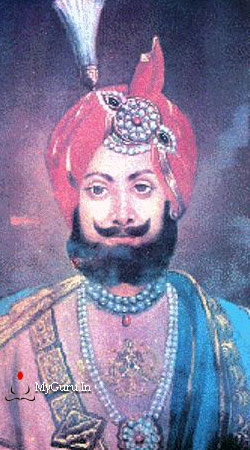 Gulab Singh (1792–1857) was the founder and first Maharaja of the princely state of Jammu and Kashmir, the second largest princely state in British India. After the defeat of the Sikhs in the First Anglo-Sikh War, Gulab Singh, who served as Prime Minister of the Sikhs, received from the British all the lands in Kashmir that were ceded to them by the Sikhs by the Treaty of Lahore to Gulab Singh for 7,500,000 rupees.

History
Gulab Singh was born on 18 October 1792 in a Hindu Jamwal Dogra Rajput family. His father, Kishore Singh Jamwal, was a distant kinsman of Jit Singh, the Raja of Jammu. Gulab Singh grew up in the care of his grand father, Zorawar Singh, from whom he learned the arts of horse riding and warfare. In 1808, when the Sikh army of Maharaja Ranjit Singh invaded Jammu, the 16-year-old Gulab Singh fought alongside his clansmen in the unsuccessful defense of Jammu. Following this defeat, the Raja of Jammu had internal autonomy of the principality, which became a tributary of the Sikh Empire. In 1809, Gulab Singh headed towards Kabul to join the army of the Afghan King, Shah Shuja as a mercenary. When his men refused to cross the river Indus, he gained employment with Sardar Nihal Singh Attariwala. Soon thereafter, Gulab Singh was found employed as a running footman in Ranjit Singh’s court. He distinguished himself in several campaigns, including the conquest of Multan (1816). He also led an independent campaign in 1816 to conquer the hill-town of Reasi.

In 1816, following another conflict, Jammu was annexed by Ranjit Singh. Raja Jit Singh, who was expelled, found refuge in British India, and later received in appendage the estate of Akhrota. Ranjit Singh appointed a governor to administer the newly conquered area which was expanded in 1819 with the annexation of Kashmir by a Sikh force. In 1820, in appreciation of services rendered by the family, and by Gulab Singh in particular, Ranjit Singh bestowed the Jammu region as a hereditary fief upon Kishore Singh. Apart from their sterling services, the family\'s intimate association with the region commended Kishore Singh\'s candidature to the Lahore court.
In 1821, Gulab Singh captured conquered Rajouri from Aghar Khan and Kishtwar from Raja Tegh Muhammad Singh.[citation needed] That same year, Gulab Singh took part in the Sikh conquest of Dera Ghazi Khan. He also captured and executed his own clansman, Mian Dido Jamwal, who had been leading a rebellion against the Sikhs.

Raja of Jammu
Kishore Singh died in 1822 and Gulab Singh was confirmed as Raja of Jammu by his suzerain, Ranjit Singh. Shortly afterwards, Gulab Singh secured a formal declaration of renunciation from his kinsman, the deposed Raja Jit Singh. The declaration, drafted in Persian, reads:
"I, Raja Jit Singh, grandson of Raja Sahib Ranjit Devji, on this occasion and out of internal inclination and dignified favors, in my own lifetime, and as a token of intrinsic love and heartfelt affection, hereby renounce proprietorship to all the protected territories of my ancestors, and my own inheritance, in favor of my prosperous barkhurdar, Raja-i-Rajgan Raja Gulab Singhji, and Raja Sahib Dhian Singhji and Raja Suchet Singhji, by way of dharam and niyam, mutual agreement and on oaths of my predecessors and Thakurs and Gurus."
Thus, the declaration transferred the headship of the Jamwal Rajputs to a junior branch of that clan.

Intrigue at Lahore
In 1824 Gulab Singh captured the fort of Samartah, near the holy Mansar Lake. In 1827 he accompanied the Sikh Commander-In-Chief Hari Singh Nalwa, who fought and defeated a horde of Afghan rebels led by Sayyid Ahmed at the Battle of Shaidu. Between 1831-39 Ranjit Singh bestowed on Gulab Singh the jagir of the salt mines in northern Punjab, and the nearby Punjabi towns like Bhera, Jhelum, Rohtas, and Gujrat.

On the death of Ranjit Singh in 1839, Lahore became a center of conspiracies and intrigue in which the three Jammu brothers were involved. The Jammu brothers had secretly allied with the British Empire. The other side was led by the Sindhanwalias. They succeeded in placing the administration in the hands of Prince Nau Nihal Singh with Raja Dhian Singh as prime minister. However in 1840, during the funeral procession of his father Maharaja Kharak Singh, Nau Nihal Singh together with Udham Singh,son of Gulab Singh died when an old brick gate collapsed on them.
In January 1841 Sher Singh, son of Ranjit Singh, tried to seize the throne of Lahore but was repulsed by the Jammu brothers. The defence of the fort was in the hands of Gulab Singh. According to his European artillery commander Alexander Gardner:
"The Dogras on the walls began to look over and were jeered at by Sher Singh’s troops, the little fort was surrounded by a sea of human heads. Gulab Singh made contemptuous replies, and roared out to Sher Singh, demanding that he should surrender... With a wild yell some 300 Akalis swept up the Hazuri Bagh and crowded into the gate. Just at that moment, when the crowd was rushing in on us, their swords high in the air, I managed to fire the ten guns, and literally blew them into the air... Then Sher Singh fled and grievous carnage ensued. The Dogras, always excellent marksmen, seemed that day not to miss a man from the walls... we counted the bodies of no less than 2800 soldiers, 200 artillerymen, and 180 horses."
|After peace was made between the two sides, Gulab Singh and his men were allowed to leave with their weapons. On this occasion, he is said to have taken away a large amount of the Lahore treasure to Jammu. Subsequently, Gulab Singh conquered the fort of Mangla (near the present Mangla Dam on the Jhelum River).

Clashes with the Afghan tribesmen
In 1837 after the Afghan armies attacked Sikh Fort of Jamrud in the Battle Of Jamrud, Maharaja Ranjit Singh sent Gulab Singh and his brother Dhyan Singh as reinforcement to the North West Frontier Province (in modern day Pakistan), Dhyan Singh proceeded towards the Khyber Pass, Prince Akbar Khan of Afghanistan fled with his armies back to Kabul on the arrival of Wazir Dhyan Singh, Gulab Singh himself proceeded to Khyber Pakhtunwa region where Afghan tribesmen leader Painda Khan Afridi had raised revolt after the killing of Hari Singh Nalwa at the Khyber Pass. Maharaja Ranjit Singh ordered Rajah Gulab Singh to crush the revolt in the Khyber region. He proceeded with 10,000 Sikh and Dogra troops towards Hazara, the revolting tribesmen fled to the mountains with their families and valuables, Gulab Singh set his base camp in Hazara and looted almost whole of the North West Frontier Province and set on fire all the houses.

Trans-Himalayan adventure
In all this time a large part of the Dogra army had been engaged in trans-Himalayan conquests. General Zorawar Singh, governor of Kishtwar, had conquered the Suru valley and Kargil (1835), the rest of Ladakh (1836–40), and Baltistan (1840). These conquests had alarmed Mian Singh, the Sikh governor of Kashmir, who complained to Prince Nao Nihal Singh that “Zorawar Singh, agent of Raja Gulab Singh was obtaining complete possession of Baltistan” (Punjab Akhbars, 20 July 1840). The Dogra campaign threatened the Sikh position in Kashmir and Gilgit and so Zorawar Singh turned his attention east to the conquest of Tibet.

In May 1841, the 5000 strong Dogra army supplemented by contingents of Kishtwaris, Ladakhis, and Baltis (raising the strength of the army to 7000) advanced eastwards in three divisions. Overcoming all the Tibetan opposition they set up base at Taklakot near the holy Mansarovar Lake in September 1841, after traversing a distance of 450 miles from the Indian frontier. With the onset of severe winter the Dogras began falling one-by-one to the extreme cold and the lack of provisions, many burning the stocks of their muskets in futile attempts to warm themselves, and were overcome by a Tibetan force on 12 December 1841. Survivors of this campaign crossed over the Himalayas south to the British territories. Gulab Singh who was then in Peshawar leading the Anglo-Sikh campaign in Afghanistan was informed of this disaster by Henry Lawrence.
The Tibetans then invaded Ladakh but were defeated by the Dogras at the Battle of Chushul. The boundary between Ladakh and Tibet was finally settled by the Treaty of Chushul.

Recognition as Maharaja
Meanwhile in the continuing intrigues at Lahore the Sandhawalia Sardars (related to Ranjit Singh) murdered Raja Dhian Singh and the Sikh Maharaja Sher Singh in 1842. Subsequently Gulab Singh’s youngest brother, Suchet Singh, and nephew, Hira Singh, were also murdered. As the administration collapsed the Khalsa soldiery clamored for the arrears of their pay. In 1844 the Lahore court commanded an invasion of Jammu to extract money from Gulab Singh, reputed to be the richest Raja north of the Sutlej River as he had taken most of the Lahore treasury.

However the Gulab Singh a shrewd politician came before the army and appeased them by sweet talks and valuable gifts and the Khalsa made peace with Raja Gulab Singh and agreed to negotiate on his behalf with the Lahore court. These negotiations imposed an indemnity of 27 lakh Rupees on the Raja. In the subsequent Anglo-Sikh wars Gulab Singh secretly allied himself with the British by giving intelligence on the Sikh Army. Under the Treaty of Lahore the defeated Lahore court was made to transfer Jammu to Gulab Singh.
Lacking the resources to occupy such a large region immediately after annexing portions of Punjab, the British recognized Gulab Singh as a Maharaja directly tributary to them on payment of 75 Lakh of the war-indemnity (this payment was justified on account of Gulab Singh legally being one of the chiefs of the Kingdom of Lahore and thus responsible for its treaty obligations). The angry courtiers of Lahore (particularly the baptised Sikh, Lal Singh) then incited the governor of Kashmir to rebel against Gulab Singh but this rebellion was defeated, thanks in great part to the action of Herbert Edwardes, Assistant Resident at Lahore.
This arrangement was formalized in the Treaty of Amritsar in 1846. In the second Sikh War of 1849 he allowed his Sikh soldiers to desert and go to fight alongside their brethren in Punjab. The treaties of Chushul and Amritsar had defined the borders of the Kingdom of Jammu in the east, south and west but the northern border was still undefined. In 1850 the fort of Chilas in the Dard country was conquered. Gilgit was lost to rebellion in 1852 but was recovered ten years later by his son.
Maharaja Gulab Singh died on 30 June 1857 and was succeeded by his son, Ranbir Singh.