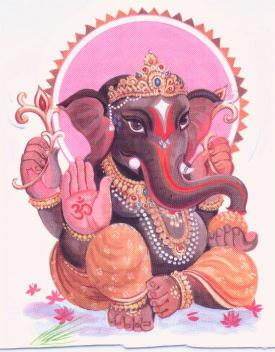 Elephant head, wide mouth, and large ears: the large head of an elephant symbolizes wisdom, understanding, and a discriminating intellect that one must possess to attain perfection in life. The wide mouth represents the natural human desire to enjoy life in the world. The large ears signify that a perfect person is the one who possesses a great capacity to listen to others and assimilate ideas.
The trunk and two tusks with the left tusk broken: there is no known human instrument that has an operating range as wide as that of an elephant's trunk. It can uproot a tree and yet lift a needle off the ground. Likewise, the human mind must be strong enough to face the ups and downs of the external world and yet delicate enough to explore the subtle realms of the inner world. The two tusks denote the two aspects of the human personality, wisdom and emotion. The right tusk represents wisdom and the left tusk represents emotion. The broken left tusk conveys the idea that one must conquer emotions with wisdom to attain perfection.
Elephant eyes: the elephant eyes are said to possess natural deceptiveness that allows them to perceive objects to be bigger than what they really are. Thus the elephant eyes symbolize the idea that even if an individual gets "bigger and bigger" in wealth and wisdom, he should perceive others to be bigger than himself; that is, surrender one's pride and attain humility.
The four arms and various objects in the four hands: the four arms indicate that the Lord is omnipresent and omnipotent. The left side of the body symbolizes emotion and the right side symbolizes reason. An axe in the upper left hand and a lotus in the upper right hand signify that in order to attain spiritual perfection, one should cut worldly attachments and conquer emotions. This enables one to live in the world without being affected by earthly temptations, just as a lotus remains in water but is not affected by it. A tray of Laddus (a popular snack) near the Lord denotes that He bestows wealth and prosperity upon His devotees. The lower right hand is shown in a blessing pose, which signifies that Ganesha always blesses His devotees.
A human body with a big belly: the human body possesses a human heart, which is a symbol of kindness and compassion toward all. Ganesha's body is usually portrayed wearing red and yellow clothes. Yellow symbolizes purity, peace and truthfulness. Red symbolizes the activity in the world. These are the qualities of a perfect person who perforrns all duties in the world, with purity, peace, and truthfulness. The big belly signifies that a perfect individual must have a large capacity to face all pleasant and unpleasant experiences of the world.
A mouse sitting near the feet of Ganesha and gazing at the tray of Laddus: a mouse symbalizes the ego that can nibble all that is good and noble in a person. A mouse sitting near the feet of Ganesha indicates that a perfect person is one who has conquered his (or her) ego. A mouse gazing at the Laddus, but not consuming them, denotes that a purified or controlled ego can live in the world without being affected by the worldly temptations. The mouse is also the vehicle of Ganesha, signifying that one must control ego in order for wisdom to shine forth.
Right foot dangling over the left foot: as stated above, the left side of the body symbolizes emotion and the right side symbolizes reason and knowledge. The right foot dangling over the left foot illustrates that in order to live a successful life one should utilize knowledge and reason to overcome emotions.