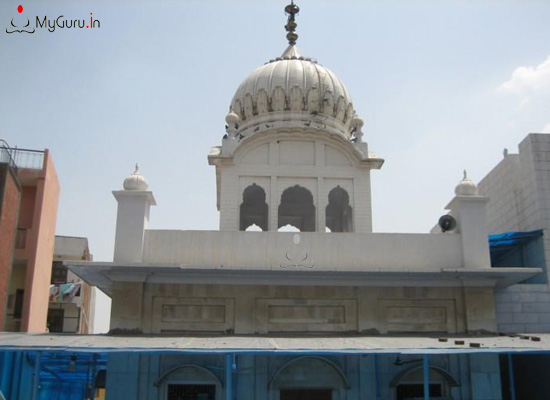 Baba Banda Singh Bahadur is one of the most important personalities in Sikh history. Born as Lakhsman Das, he became an ascetic and changed his name to Madho Das. He lived on the banks of the Godavari, about 15 miles from Nanded SahibWhen Guru Gobind Singh reached Nanded in South India in August 1708 a miracle mongering Yogi named Madho Das, tried to use his occult powers to humble Guru Gobind Singh, but a week-long struggle and attempt to subdue the Guru ended in defeat and frustration for the yogi. Overpowered morally and spiritually Madho Das presented himself before the dazzling personality of Guru Gobind Singh, making his humble submission as \"Banda : Devoted Servant\" of the Guru. He accepted the Khalsa baptism and was named Banda Singh. He was sent to Punjab along with other eminent experienced apostles, skilled in warfare and military administration, to chastise those who still persecuted the Sikhs.

History
Even while the Guru was away from Punjab, he kept himself in touch with the goings-on there. Realising that his negotiations with the Mughal emperor might not succeed, he wanted to rouse the peasantry. He chose Banda for this purpose, and gave him five of his arrows and one sword. Five important Sikhs and 20 others were asked to go with him to Punjab and fulfil his mission. He also gave him hukumnamas to be given to the Sikhs, urging them to volunteer service under him.Thirtyfive miles from Delhi, Banda Bahadur planted the Guru’s standard and started forwarding Guru’s hukumnamas to Sikhs. He issued a proclamation offering protection to anybody threatened by thieves, robbers or bigots. The message spread like fire and people flocked to him. For seven years, he consolidated his position and after organising people from Malwa and Majha, attacked troops of Wazir Khan, Governor of Sirhind. In a fierce battle, he defeated the Mughal army and razed Sirhind.He was the first to establish Sikh rule, struck coins in the name of Guru Nanak and Guru Gobind Singh and his seal had the words, ‘Degh’ and ‘Tegh’, the hallmarks of Sikh philosophy.

Bhai Mani Singh the High Priest had already defeated the attack of the Lahore and Patti armies on Amritsar, with only 500 Sikhs in April 1709. Banda reached Punjab and started his campaigns against those who had harmed the Sikhs in November 1709 with ruthless vengeance. Within a year he and the Tat Khalsa stationed at Amritsar occupied the whole of Punjab this side of Lahore, but as the Emperor himself arrived with all his forces, he was not able to remain in power for more than 11 months. He retreated to the Hills. For five years Banda fought battles with massive armies of the Mughals.When his small army was encircled in Gurdas Nangal, he was forced to surrender on the assurance that no harm will be done to him. He was arrested on 7th December 1715, and brought to Delhi along with many prisoners. From March 5, 1716 the companions of Banda began to be be headed one by one at the speed of one hundred a day and all his followers except his closest associates were slaughtered within seven days. There was a young lad of about eight who was offered release and wealth if he accepted Islam. His mother had agreed but he refused to abjure his faith. He cheerfully placed his head on the block and was beheaded. Not a single person agreed to the conversion. Every day for seven days, 100 Sikhs were put to sword. \"It is not a little remarkable\" says Edward Stephens, an eye witness, “with what patience they undergo their fate and to the last it has not been found that one apostatized from the newly formed religion. \"Banda was taken in a procession near Kutab-minar and paraded around the tomb of Emperor Bahadur Shah. When asked by Emperor Farrukh-Siyar, \"What type of death would you wisht of ace now?\" Banda calmly replied, \"Exactly the type you wish to face when death comes to you. \"Banda was also killed with son in front of him very mercilessly tortured and slain. his four year old son \"Ajay Singh\" , whose heart was taken and thrust into his mouth. \"Resigned to the Will of God, he died on Sunday, June 19, 1716 A.D. \"Says Elphinstone; \"Unshaken in his faith in Sikhism, glorifying in having been raised up by God to be scourge to the inequities and oppression of the age, \" Banda \'s prophecy about Farrukhsiyar came true. Exactly three years later on 27th April Farrukhsiyar was imprisoned, humiliated, tortured and brutally murdered by his own ministers.

State : Delhi
Other Pilgrimages of Delhi are :