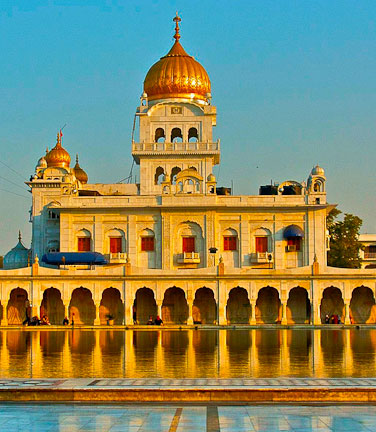 Gurudwara Bangla Sahib is the most prominent Sikh gurdwara, or Sikh house of worship, in Delhi, known for its association with the eighth Sikh Guru, Guru Har Krishan, and the pond inside its complex, known as the "Sarovar", whose water is considered holy by Sikhs and is known as "Amrit". It was first built as a small temple by Sikh General, Sardar Bhagel Singh in 1783, who supervised the construction of nine Sikh shrines in Delhi in the same year, during the reign of Mughal Emperor, Shah Alam II.
It is situated near Connaught Place, New Delhi and is instantly recognisable by its stunning golden dome and tall flagpole, Nishan Sahib.

History
Gurdwara Bangla Sahib was originally a bungalow belonging to Raja Jai Singh, an Indian ruler in the seventeenth century, and was known as Jaisinghpura Palace, in Jaisingh Pura, an historic neighbourhood demolished to make way for the Connaught Place, shopping district.
The eighth Sikh Guru, Guru Har Krishan resided here during his stay in Delhi in 1664. During that time, there was a smallpox and cholera epidemic, and Guru Har Krishan helped the suffering by giving aid and fresh water from the well at this house. Soon he too contracted the illness and eventually died on March 30, 1664. A small tank was later constructed by Raja Jai Singh over the well, its water is now revered as having healing properties and is taken by Sikhs throughout the world back to their homes.
The Gurdwara and its Sarovar are now a place of great reverence for Sikhs, and a place for special congregation on birth anniversary of Guru Har Krishan.

Overview
The grounds include the temple, a kitchen, a large pond, a school and an art gallery. As with all Sikh Gurdwaras, the concept of langar is practiced, and all people, regardless of race or religion may eat in the Gurdwara kitchen (langar hall). The Langar (food) is prepared by gursikhs who work there and also by volunteers who like to help out. At the Gurdwara, visitors are requested to cover their hair and not to wear shoes. Assistance to foreigners and visitors with Guides, head scarves, and shoe-minding service can be found inside the compound and are available free of charge. Anyone can volunteer to help keep the shoes in the shoe-minding room, and cleaning the precincts of the Gurudwara.
The complex also houses a higher secondary school, Baba Baghel Singh Museum, a library and a hospital. AirConditioning has been done inside the Gurudwara and also for the Langar Hall. A new "Yatri Niwas", and multi-level parking space have been constructed. A toilet complex is also constructed. The backside of the Gurudwara is also being spruced up, to give a better view from the roadside also.

State : Delhi
Other Pilgrimages of Delhi are :