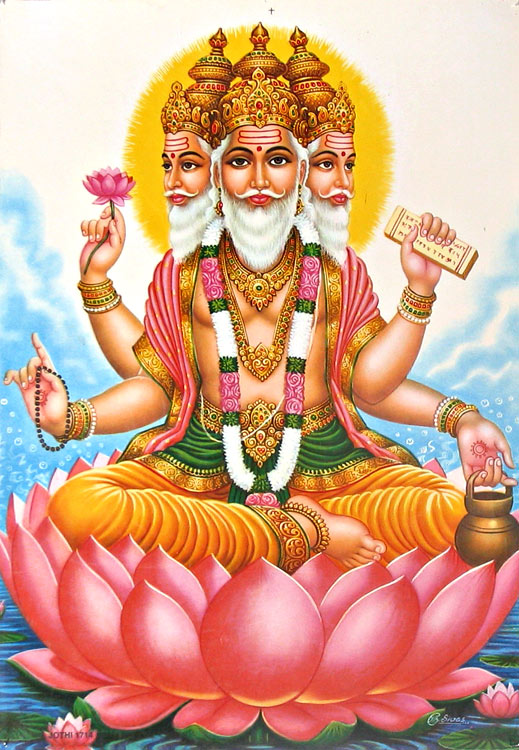 Lord Brahma Ji Ke Articles
Lord Brahma symbolizes the aspect of the Supreme Reality that brings forth the creation. For this very reason, Hindus call Lord Brahma the Creator of the universe. He is the first member of the Hindu Trinity that also includes Lord Vishnu and Lord Shiva. His divine consort is Saraswati, the Goddess of learning and knowledge. Goddess Saraswati provides Lord Brahma with knowledge that is necessary for the process of creation.


Brahma is usually conceived of by Hindus as a bearded, four-faced, four-armed deity. In popular images, He carries a rosary in the upper right hand, a book in the upper left hand, a kamandalu (water pot) in the lower left hand, and bestows grace with His lower right hand. The four faces represent the sacred knowledge of the four Vedas (Rig, Yajur, Sama, and Atharva), and this is the most prominent feature of any image of Brahma. The four faces, therefore, symbolize that Brahma is the source of all knowledge necessary for the creation of the universe. The four arms represent the four directions and thus represent the omnipresence and omnipotence of Lord Brahma.
The four hands represent the four aspects of human personality: mind (back right hand), intellect (back left hand), ego (front right hand), and the empirical self or conditioned consciousness (front left hand). The rosary symbolizes the time cycle through which the world moves from creation to sustenance, from sustenance to dissolution, and from dissolution to new creation. The rosary also symbolizes the materials used in the process of creation. Its position in the back right hand suggests the intelligent use of these materials in the process of creation.
A book in the back hand (symbolizing the intellect) illustrates that right knowledge is important for any kind of creative work. A water pot (kamandalu) in the front left hand symbolizes the cosmic energy by which Brahma brings the universe into existence. The hand symbolizing ego (the front right hand) is shown in the pose of bestowing grace. This conveys the idea that the Lord bestows grace and protects all sincere devotees.
The color gold symbolizes activity and thus the golden face of Brahma indicates that the Lord is active when involved in the process of creation. The white beard denotes wisdom and the long beard conveys the idea that creation is an eternal process. The crown on the head of the Lord implies that the Lord has supreme power and authority over the process of creation.
The lotus symbolizes the Supreme Reality, the essence of all things and beings in the universe. Brahma sitting or standing on a lotus indicates that He represents the creative power of the Supreme Reality. The color white symbolizes purity. Thus Brahma wearing clothes that are off-white, represents the dual nature of creation, that is purity and impurity, happiness and unhappiness, vice and virtue, knowledge and ignorance, and so on.
In Hindu mythology, a swan is said to possess a unique discriminating faculty, which enables it to distinguish pure milk from a mixture of milk and water. The swan is therefore used to symbolize the power of discrimination. Brahma uses the swan as a vehicle. This is intended to convey the idea that although creation is pluralistic in nature, there is only one Supreme Reality that the entire universe emanates from. This knowledge can be acquired by an individual by training his mind and Intellect to acquire the power of right discrimination.
As creation is the work of the mind and the intellect, Lord Brahma symbolizes the Universal Mind. From the standpoint of an individual, Brahma symbolizes one's own mind and intellect. Since an individual is naturally gifted with the mind and intellect, he or she may be said to have already realized Brahma. For this reason the worship of Brahma is not very popular among all Hindus. He is, however, worshipped by seekers of knowledge, such as students, teachers, scholars and scientists.