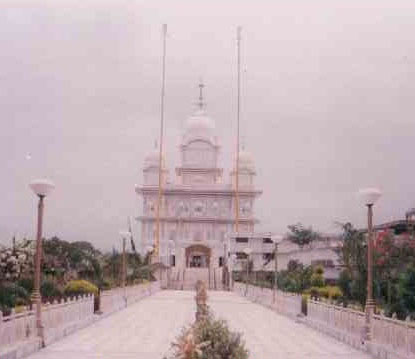 Gurdwara Data Bandi chhod is a Sikh festival which occurs during the month of Ashvin in the Indian lunisolar calendar, around the new moon day (Amavasya). This usually falls in November. Bandi Shor(Shodh) Diwas and Diwali are separate festivals and the events actually fall on different days; however, commonly in the popular calendars, they are celebrated on the same day. For this reason, many people often think of these events as if they are the same. In real terms, the day of release of the sixth Guru with the 52 kings was actually a few days before Diwali in 1619.
The word "Bandi" is translated from Punjabi into English as "Imprisoned" (or "Prisoner"), "Shor"(shodh) as "Release," and "Divas" as "Day," rendering "Bandi Shor(Shodh) Divas" from Punjabi into English as "Prisoners' Release Day."
Bandi Shor(Shodh) Divas celebrates the release from prison of the Sixth Guru, Guru Hargobind Ji, and 52 other princes with him, in October 1619. Following their release, Guru Hargobind Ji arrived in Amritsar in the midst of the Diwali festival, and the day was henceforth associated with his liberation.

Description
In the Sikh struggle for freedom from the oppressive Mughal regime, the festival of Bandi Shor(Shodh) Divas did become the second most important day after the Vaisakhi festival in April.
In addition to Nagar keertan (a street procession) and an Akhand paath (a continuous reading of Guru Granth Sahib), Bandi Shor(Shodh) Divas is celebrated with a fireworks display. The Golden Temple as well as the whole complex is festooned with thousands of shimmering lights, creating a unique jewelbox effect

History
The Sixth Guru, Guru Hargobind, was freed from imprisonment in the famous fort of Gwalior by Emperor Jahangir in October, 1619. The reason for the young Guru’s imprisonment was nothing more than religious bigotry. The Guru’s father, Guru Arjan, had been martyred for the same reason. According to Sikh tradition, the Guru agreed to be freed only if the other Indian chiefs (rajahs) imprisoned with him were freed. Jahangir was under pressure from moderate but influential Muslim religious leaders like Hajrat Mian Mir, a friend of the Guru. So he relented grudgingly and ordained, "Let those rajahs be freed who can hold on to the Guru’s coat tails and walk out of prison". He had in mind no more than four or five being freed with the Guru. However, the Guru was not to be outmanoeuvred in this way. He asked for a special coat to be made with 52 coat tails - same number as the rajahs in prison with him! And so the rajahs were freed and the Guru became known popularly as the "Bandi Shor(Shodh)" (Deliverer from prison). He arrived in Amritsar on the day of Diwali and Harmandir Sahib (also known as the Golden Temple) was lit with hundreds of lamps to celebrate his return; the day came to be known as the "Bandi Shor(Shodh) Divas" (the day of freedom).
Thenceforth, the Sikh struggle for freedom, which intensified in the 18th Century, came to be centered around this day. In addition to Vaisakhi (now in April), when Khalsa, the Sikh nation was formally established by the Tenth Guru Gobind Singh, Bandi Shor(Shodh) Divas became the second day in the years when the Khalsa met and planned their freedom strategy.
Another important event associated with Diwali is the martyrdom in 1734 of the elderly Sikh scholar and strategist Bhai Mani Singh, the Granthi (priest) of Harmandir Sahib (Golden Temple). He had refused to pay a special tax on a religious meeting of the Khalsa on the day of Diwali. This and other Sikh martyrdoms gave further momentum to the Khalsa struggle for freedom and eventually success in establishing the Khalsa rule north of Delhi