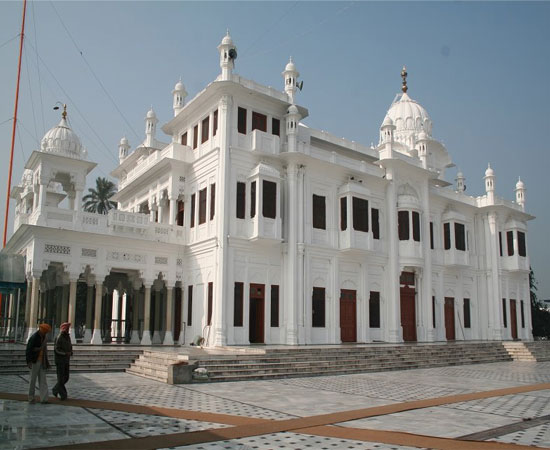 Gurudwara Ber Sahib, the principal shrine at Sultanpur, is situated on the bank of the rivulet Kali Bein, half a kilometre to the west of the old town. Guru Nanak performed his morning ablutions in the Bein and then sat under a Ber (Zizyphus jujuba) tree to meditate. Guru Ji meditated at this tree daily for 14 years, nine months and 13 days. It was during one such ablution that Guru Nanak had what is described, in the Janam Sakhis, as a direct communion with the Divine. As the Janam Sakhis narrate the details, Guru Nanak one morning disappeared into the stream and was not seen for two days. When he reappeared at a spot, 2 km upstream, now known as Sant Ghat, the first words he uttered were, "No one is Hindu, No one is Musalman (Muslim)." Guru Nanak was now ready to embark on his long journeys. Gurudwara Ber Sahib is built by the side of an old ber tree which is believed to be the one under which Guru Nanak would sit in meditation. The present building of Gurudwara Ber Sahib was built by Maharaja Jagatjit Singh of Kapurthala. The cornerstone was laid by Bhai Arjan Singh of Bagarian on 25 February 1937, and the Gurudwara was on completion dedicated by Lieutenant General Maharaja Yadavinder Singh of Patiala on 26 January 1941. Standing on a high plinth and entered through a portico, supported by octagonal columns, and a small entrance gallery is the high ceiling, marble floored hall. At the far end, marked off by a high archway decorated with floral designs in stucco, is the sanctum sanctorum, where the Guru Granth Sahib is seated on a white marble canopied throne. Besides the daily services and observance of important Sikh anniversaries, a largely attended fair takes place each November to mark the birth anniversary of Guru Nanak.
Sultanpur Lodhi is an old town situated on the south bank of Kali Bein in Kapurthala district of Punjab. This is the town where Guru Nanak Dev Ji lived for several years before undertaking long travels to preach his unique and divine doctrine. Guru Nanak Dev Ji’s sister Bebe Nanki lived in this town with her husband Shri Jai Ram.
Guru Nanak Dev Ji himself planted the ber tree and it is still present in the Gurdwara. Guru Ji worked at sultanpur lodhi in Modi Khana of Nawab Daulat Khan Lodhi.
In the year 1488 Guru Nanak Dev Ji married to Bibi Sulakhni Ji and while staying in sultantpur lodhi Guru Ji had two sons named Shri Chand and Lakhmi Chand. In late 1497 the news of Guru Ji drowning in the Kali Bein spread like fire. After three days Guru Ji came out of canal and said these words “na koi hindu, na koi muslman”. After this Guru Ji started his lifelong mission of Udasis from Sultanpur Lodhi.
Other than visiting many places in India Guru Ji also paid visit to Mecca, Madina and Baghdad via Multan, Peshawar Sakhar, Soni Miani, and Hinglaj etc. Guru Ji also visited Syria, Turkey and Tehran (present capital of Iran).
Guru Ji was a born poet. He wrote 947 hyms comprising of Japji Sahib, Asa Di War, Bara-Mah, Sidh Gosht, Onkar (Dakhni) and these were included in Guru Granth Sahib by Guru Arjan dev Ji (fifth guru). As a social reformer Guru Nanak Dev Ji upheld the cause of women, downtrodden and the poors. He attacked the citadel of caste system of Hindus and theocracy of Muslim rulers.
The association of Guru Nanak Dev Ji with Sultanpur Lodhi began in 1475, when Bebe Nanki Ji was married in this town. Guru Ji’s father was concerned about the future of his son. Resulting in which, Guru Ji was sent to the custody of Shri Jai Ram. After Nankana Sahib (now in Pakistan) Sultanpur Lodhi is the only city, which can be said to be most related to the first guru of the sikhs, Guru Nanak Dev Ji.