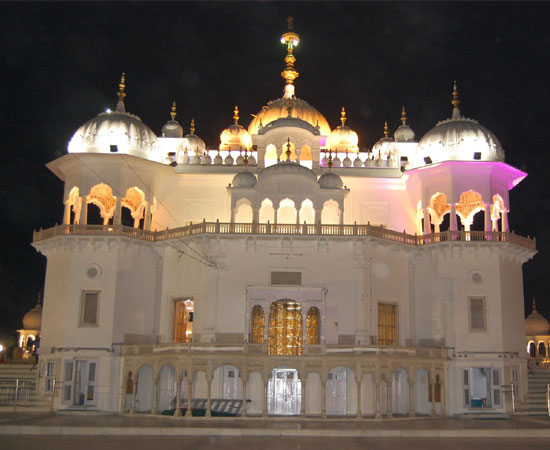 Anandpur Sahib is a city in Rupnagar district in the state of Punjab, India. Known as "the holy City of Bliss," it is a holy city of the Sikhs and is one of their most important sacred places, closely linked with their religious traditions and history. It is located on the lower spurs of the Himalayas surrounded by picturesque natural scenery, with the river Sutlej forming a shimmering and shiny blue border on the south west barely four miles away.

History
Anandpur Sahib was founded in 1665 by the ninth Sikh Guru, Guru Tegh Bahadur, near the ruins of an ancient place, Makhowal. On May 13, 1665, Guru Tegh Bahadur went to Bilaspur to attend the mourning for Raja Dip Chand of Bilaspur State. The Dowager Rani Champa of Bilaspur offered to give the Guru a piece of land in her state. The land consisted of the villages of Lodhipur, Mianpur and Sahota. Here on the mound of Makhowal, Guru Tegh Bahadur raised a new habitation. The ground was broken on 19 June 1665, by Baba Gurditta Ji. The new village was named Chakk Nanaki after the Guru's mother, Nanaki. The place later came to be known as Anandpur Sahib.

Festivals and fairs
Anandpur Sahib comes to life every year on the occasion of Hola Mohalla. This tradition dates back to the times of the 10th Guru, Sri Guru Gobind Singh . The Guru decreed that the occasion of the festival of Holi be the occasion for the display of the martial spirit of his people and he gave this festival of Holi the Sikh name of 'Hola Mohalla'. Each year Hola Mohalla marks the congregation of up to 100,000 devotees from all over the country for a festival of colour and gaiety.
Thousands of devotees from various parts of the country throng to Anandpur Sahib to participate in the fair which lasts for three days. The Gurudwaras are specially decorated for the occasion. During Hola Mohalla Anandpur Sahib wears a festive appearance and hums with activities in the month of March every year. Community conferences and religious functions are also organized. On this occasion, Nihangs from all over the country gather for the celebrations of the Hola Mohalla. The highlight of the festival is a huge procession by the Nihangs, clad in their traditional dress and weapons, on the last day of the fair. The procession starts from the headquarters of the Nihangs, opposite Gurudwara Anandgarh Sahib, and passing through the bazar goes to village Agampur and reaches the fort of Holgarh, the place where Guru Gobind Singh used to celebrate this fair. Thereafter, the procession heads toward the sandy bed of Charan Ganga, where demonstration of martial games including riding, tent pegging, sword wielding etc. are witnessed by a large number of people.

Baisakhi in 1999, at Anandpur Sahib marked the completion of 300 years of the birth of the Khalsa. It was on Baisakhi day in 1699 that Sri Guru Gobind Singh baptised the Panj Pyaras at the place where Takht Sri Keshgarh Sahib stands.