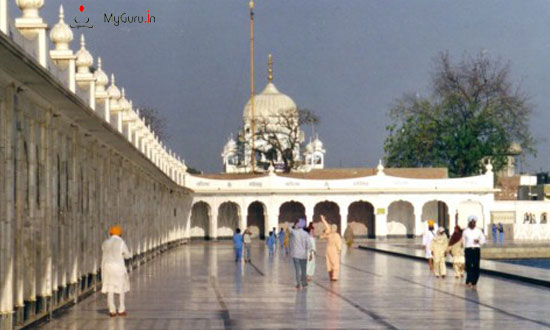 Gurdwara Thambu Mal, Muktsar, Dist. Faridkot. As the enemy troops of Wazir Khan were approaching Guru Gobind Singh they were intercepted by a force of 40 Sikhs led by a village women Mai Bhago. Earlier during the prolonged siege of Anandpur Sahib, 40 Sikhs had deserted the Guru by signing a letter saying that they were no longer Sikhs of the Guru. They lived in the Malwa region in which Guru Gobind Singh was now staying. Here they were shamed by their women folk for having deserted the Guru. Mai Bhago dressed in soldiers uniform gathered the 40 deserters to help Guru Gobind Singh and they engaged the approaching army of Wazir Khan at this spot. While the enemy had a large force they was tired from their long march while the outnumbered Sikhs were fresh. In the fierce battle the ensued the Sikhs were able to scatter the enemy who were forced to retreat after having suffered severe casualties and because of the lack of drinking water in the area. Although the Sikhs emerged victorious, all 40 former deserters were killed in battle. Guru Gobind Singh was deeply touched by the sacrifice of the 40. As Guru Gobind Singh surveyed the battle scene, one seriously wounded Sikh Mahan Singh was still alive and before he died he begged Guru Gobind Singh to forgive the 40 for having deserted him earlier. Guru Gobind Singh blessed the 40 and said that they had achieved \'Mukhti\', spiritual liberation for their brave act of self sacrifice.