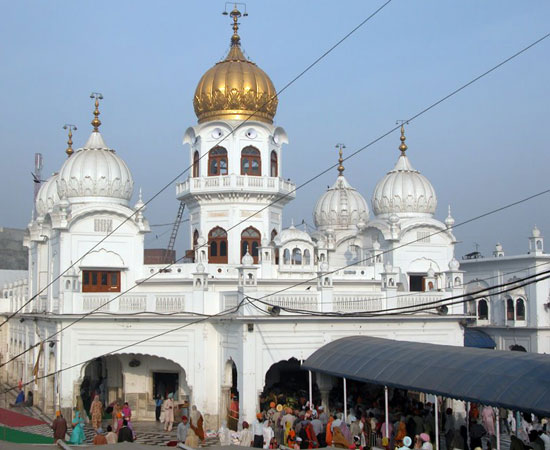 SHAHID BABA DEEP SINGH GURUDWARA, AMRITSAR The great Sikh scholar and martyr Baba Deep Singh was mortally wounded here. In 1762 the Afghan invader Ahmed Shah Abdali ordered the Golden Temple blown up and the Sacred Tank filled in. Baba Deep Singh the greatest Sikh scholar of his time took up the sword on a mission to restore the sanctity of the Golden Temple. He along with five thousand faithful Sikhs fought against the Muslim forces of Jahan Khan. Although heavily outnumbered the Sikhs fought bravely.

Sardar Jassa Singh Ramgarhia constructed a memorial to the famed martyr. In the 19th century Akali Phula Singh replaced the memorial platform into a magnificent Gurdwara. The Shiromani Gurdwara Prabandhak Committee enlarged and developed this important Gurdwara into the present complex in the early 20s of this century Gurdwara Baba Deep Singh near the Chativind Gate of the walled city com-memorates the martyrdom of Baba Deepp Singh of the Shahid misi, who, coming from Damdama Sahib (Talvandi Sabo) in Bathinda district to liberate the Darbar Sahib, which had been attacked and desecrated by the Afghan invaders, was mortally wounded here on 11 November 1757.Jassa Singh 1803 of Ramgarhia misi raised a memorial platform on the site which was Developed into a Gurdwara by Akali Phula Singh 1823.