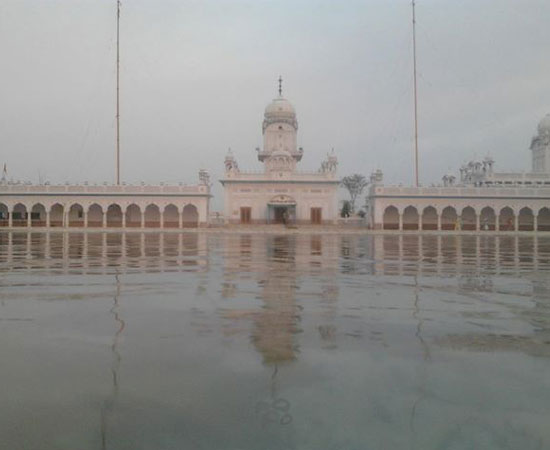 Gurdwara Nanakiana Sahib near the village of Mangval, 4 km east of Sangrur in the Punjab, is sacred to Guru Nanak and Guru Hargobind. When Guru Nanak came here in the early sixteenth century, the village of Mangval was, according to local tradition, closer to the site of the present Gurdwara which stands near a deep pond. It was on the bank of this pond that the Guru had preached to the villagers. A century later, as Guru Hargobind visited the village in 1616, he reminded the inhabitants to maintain the sanctity of the pool consecrated by Guru Nanak and not to pollute its water with village waste. He also had a platform constructed in honour of Guru Nanak. The villagers obeyed him and removed to the present site from where they would come to make obeisance at Thara Sahib, or the sacred platform, and to have a dip in the holy pool.

The present building, a fortress like haveli, was, according to a copper plate preserved in the Gurdwara, constructed in 1886 by Raja Raghbir Singh (1833 - 87) of Jind. Entered through a massive wooden gate, it consists of several courtyards. In the central courtyard is a marble floored domed structure called Manji Sahib Patshahi Pahili. It has a platform, reverently covered with a piece of cloth, representing the Thara Sahib established by Guru Hargobind. Behind the Manji Sahib, in a separate compound, is the assembly hall where the Guru. Granth Sahib is seated in the middle. Preserved as a sacred relic, is a peculiar weapon here called gurzitabar with 1724 inscribed on it in Persian numerals. It is a steel rod with a hilt like that of a sword but the point having five tongue like blunt blades projecting sideways. A Persian couplet inscribed on it means: \\\"Gun. Itabar in the hands of Gobind Singh strikes the enemy\\\'s head.\\\" An engraved figure shows Guru Gobind Singh on horseback.
In another compound behind the diwan hall, there is an old karir tree which has grown through the roof of the building. It is believed that it dates back to the time of the Guru. Yet another compound houses the Guru ka Langar. The old pond has been lined and converted into a sarovar. Though outside the Gurdwara wall, access to it is from inside the premises through two separate doors for men and women.
Gurdwara Nanakiana Sahib owns 140 acres of land and is administered directly by the SGPC. Besides daily prayers and divans, important days on the Sikh calendar are observed with special religious programmers, Baisakhi taking precedence among them.
Gurudwara Sri Nankiana Sahib is situated in the district city Sangrur, situated on the outskirts of city it marks the place where Sri Guru Nanak Dev ji, Sri Guru HarGobind Sahib and Sri Guru Tegh Bahadur Sahib ji had visited. Sri Guru Nanak Dev ji had meeting with kaal here. He told Guru Sahib that how he bring people under his control. Sri Guru HarGobind Sahib ji tied his horse to karir tree. Later when the construction of Gurudwara Sahib was going on some person unknowingly cut the karir tree and constructed a room there. But with passing time karir tree grew up again and came out of the roof of the room.