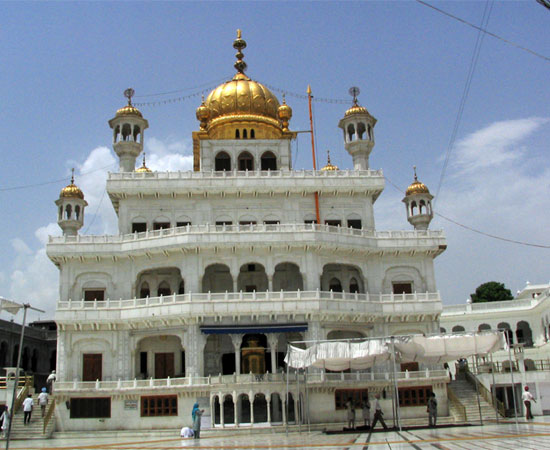 The Akal Takht (means The Throne of the Timeless One) is the highest seat of temporal authority of the Khalsa. The Akal Takht is located in the Harmandir Sahib complex in Amritsar, Punjab. It was built by the Guru Hargobind Sahib, stands witness to the Sikh idea of sovereignty. It symbolizes the interlocking of the temporal with the spiritual in Sikhism

History
Akal Takht illuminated on Guru Nanak Gurpurab, in Harmandir Sahib Complex, Amritsar.
The Akal Takht was built by the sixth Sikh Guru, Guru Hargobind Ji as a symbol for political sovereignty of Sikhs. It was established as the place from which the spiritual and temporal concerns of the Sikh people could be acted upon. It stood as a symbol of political and military resistance against the tyranny and cruelty of the 17th- and 18th-century rulers. In the 18th century, Ahmed Shah Abdali led a series of attacks on the Akal Takht and Harmandir Sahib. Akal Takht Sahib represents the sovereignty of the Sikh Nation. It stood as a symbol of political bulwark against the Mughal emperors in the 17th and 18th century. Various attacks on the Akal Takht and Harimandir Sahib have been led in past by Ahmed Shah Abdali and Massa Rangar in the 18th century. On June 4, 1984, the Akal Takht was badly damaged when the Indian Army stormed Sri Darbar Sahib during Operation Bluestar. The Jathedar of the Akal Takhat is the highest spokesperson of the Sikh religion. Khande-Bate-Dee-Pahul or the initiation with the sword, initiated by Guru Gobind Singh, continues to be routinely performed at the Akal Takht. Hari Singh Nalwa, a General under Maharaja Ranjit Singh the leader of the Sikh Kingdom, wished to make the Akal Takht resplendent with gold and had donated a part of his wealth for this purpose.

Architecture
On the original plot of land of the Akal Takhat, there only existed a high mound of earth across a wide open space, where Guru Hargobind as a child used to play. The Gurus original Takhat is said to have been a simple platform, 3.5 meters high, on which the Guru would sit like a king at court, surrounded by insignia of royalty such as the parasol and the flywhisk, and perform kingly tasks of receiving petitions and administrating justice. Today’s Akal Takhat is a large 5-storey modern structure (3 storeys were added by Maharaja Ranjit Singh) with inlaid marble and a gold-leafed dome, that does not convey the design of Guru Hargobind’s simple Takht or plinth. However, recent restoration work has uncovered a layer of lime plaster, with painted decoration, that may have been part of the original Takhat. That plinth was higher than the plinth of the Harimandir; yet the absence of a superstructure kept the original Akal Takhat at a level lower than the shrine.
The elaboration of the structure on marble pillars, as a semi-circular platform with an open view to the courtyard, reminiscent of an air-house, must have grown from the use to which the Durbar hall was put.
The gilding of the ceiling with ornamentations like those in the interior of the Hari Mandir Sahib is perhaps later than in the holy of holies. The wall paintings apparently belong to a later period, as there are panels showing Europeans.
The total effect of the Akal Takhat and the open courtyard, in front of the Darshani Deori and the views of the Amritsar beyond, is of a unique and noble structure .

1984: Damage to Akal Takht during Operation Blue Star
The Akal Takht was badly damaged during the assault on the Golden Temple by the Indian army in June 1984. On June 6, 1984 the Indian Army stormed the Golden Temple complex, even bringing its tanks into the Parikrama during the Operation Blue Star. Operation Blue Star was an Indian military operation, ordered by Indira Gandhi, then Prime Minister of India, to stop and surpress the pseudo dharam yudh morcha (Started by the Jarnail Singh Bhindarwale) from the Golden Temple in Amritsar.
The military action led to an uproar amongst Sikhs worldwide and the increased tension following the action led to assaults on members of the Sikh community within India. Many Sikh soldiers in the Indian army mutinied, many Sikhs resigned from armed and civil administrative office and many returned awards and honours they had received from the Indian government. The use of artillery in the congested inner city of Amritsar proved deadly to many civilians. The media blackout throughout the Punjab resulted in widespread doubt regarding the official stories and aided the promotion of hearsay and rumour. The operation is criticised on four main grounds, the choice of time of attack by Government, heavy casualty, loss of property, and allegation of human rights violations by Army personnel. Untold numbers of Sikhs, thousands of innocent pilgrims and some army personnel were killed in the operation. Many Sikh artifacts and Sikh Reference Library were burned in the destruction which ensued and many innocent lives were lost.
In 2005, Prime Minister Manmohan Singh acknowledged some of the failures and apologized to the Sikh community.

Re-building of the Akal Takht
At first the Akal Takht was rebuilt by contractors of the Indian Government. A few Sikhs were then excommunicated from Sikhism, for what Sikhs saw as siding with the Indian Government. The rebuilt Akal Takht became known as the 'Sarkari Takht' - Sarkari meaning one of the Government and not one of Akal (meaning Immortal one or God).
Buta Singh who was appointed home minister in the Rajiv Gandhi Cabinet was excommunicated from the Sikh Panth for his role in rebuilding a 'sarkari' Akal Takht after Operation Blue Star. He finally had to undergo the 'punishment' of cleaning the devotees's utensils and shoes at the Golden Temple for being taken back into the faith.

Sarbat Khalsa 1986
In 1986 the Sikhs at a Sarbat Khalsa meeting of around 500,000 Sikhs in Amritsar decided to tear down the rebuilt Akal Takht or 'Sarkari Takht'. They then began work on rebuilding the Akal Takht through the Sikh tradition of Kar Seva and Self Service.
The current Akal Takht is the one which was built in 1986 by the Sikhs and took around 9 years to complete. The design is much bigger than the original Akal Takht and so are the rooms within the building to accommodate the bigger flow of pilgrims.A section of Sikhs also used the Sarbat Khalsa 1986 to declare an edict from the Akal Takht to establish the sovereign Sikh State of Khalistan.

The Jathedar
The Jathedar of the Akal Takht along with the Jathedars of the other four holy Takhts are the religious and political authority of the Sikhs.