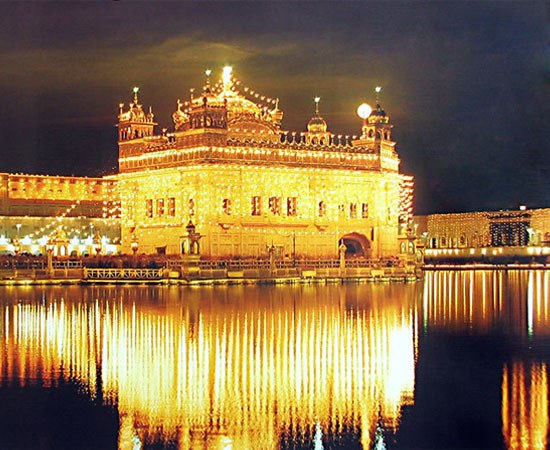 The Harmandir Sahib  also Darbar Sahib and informally referred to as the "Golden Temple"  is a prominent Sikh Gurdwara located in the city of Amritsar, Punjab, India. It was built by the fifth Sikh guru, Guru Arjan, in the 16th Century. In 1604, Guru Arjan completed the Adi Granth, the holy scripture of Sikhism, and installed it in the Gurdwara.

There are four doors to get into the Harmandir Sahib, which symbolize the openness of the Sikhs towards all people and religions. The present day Gurdwara was rebuilt in 1764 by Jassa Singh Ahluwalia with the help of other Sikh Misls. In the early nineteenth century, Maharaja Ranjit Singh secured the Punjab region from outside attack and covered the upper floors of the Gurdwara with gold, which gives it its distinctive appearance and its English name.

The Harmandir Sahib literally means The Temple of God. The fourth guru of Sikhism, Guru Ram Das, excavated a tank in 1577 CE which subsequently became known as Amritsar (meaning "Pool of the Nectar of Immortality"), giving its name to the city that grew around it. In due course, a Sikh edifice, Sri Harmandir Sahib (meaning "the abode of God"), rose in the middle of this tank and became the supreme centre of Sikhism. Its sanctum came to house the Adi Granth comprising compositions of Sikh Gurus and other saints considered to have Sikh values and philosophies,  Baba Farid and Kabir. The compilation of The Adi Granth was started by the fifth guru of Sikhism Guru Arjan.

Construction of the Harmandir Sahib

Originally built in 1574, the site of the Gurdwara was surrounded by a small lake in a thin forest. Mughal Emperor Akbar, who visited the third Sikh Guru, Guru Amar Das, in the neighbouring town of Goindval, was so impressed by the way of life in the town that he gave a jagir (the land and the revenues of several villages in the vicinity) to the Guru's daughter Bhani as a gift on her marriage to Bhai Jetha, who later became the fourth Sikh Guru, Guru Ram Das ji. Guru Ram Das enlarged the lake and built a small township around it. The town was named after Guru Ram Das as Guru Ka Chak', Chak Ram Das or Ram Das Pura.

Some of the architectural features of the Harmandir Sahib were intended to be symbolic of the Sikh worldview. Instead of the normal custom of building a Gurdwara on high land, it was built at a lower level than the surrounding land so that devotees would have to go down steps to enter it. In addition, instead of one entrance, Sri Harmandir Sahib has four entrances.

The Gurdwara was completed in 1604. Guru Arjan, installed the Guru Granth Sahib in it and appointed Baba Buddha as the first Granthi (reader) of it on August 1604. In the mid-18th century it was attacked by the Afghans, by one of Ahmed Shah Abdali's generals, Jahan Khan, and had to be substantially rebuilt in the 1760s. However, in response a Sikh Army was sent to hunt down the Afghan force. Both forces met each other five miles outside Amritsar; Jahan Khan's army was destroyed.

Much of the present decorative gilding and marblework dates from the early 19th century. All the gold and exquisite marble work were conducted under the patronage of Hukam Singh Chimni and Emperor Ranjit Singh, Maharaja of the Sikh Empire of the Punjab. The Darshani Deorhi Arch stands at the beginning of the causeway to the Harmandir Sahib; it is 202 feet (62 m) high and 21 feet (6 m) in width. The gold plating on the Harmandir Sahib was begun by Ranjit Singh and was finished in 1830. Maharaja Ranjit Singh was a major donor of wealth and materials for the shrine and is remembered with much affection by the Punjabi people in general and the Sikh community in particular.

Celebrations at the Harmandir Sahib

One of the most important festivals is Vaisakhi, which is celebrated in the second week of April (usually the 13th). Sikhs celebrate the founding of the Khalsa on this day and it is celebrated with fervour in the Harmandir Sahib. Other important Sikh religious days such as the martyrdom day of Guru Teg Bahadur, the birthday of Guru Nanak, etc., are also celebrated with religious piety. Similarly Bandi Chhor Divas is one of the festivals which sees the Harmandir Sahib beautifully illuminated with Divas (lamps) lights and fireworks are discharged. Most Sikhs visit Amritsar and the Harmandir Sahib at least once during their lifetime, particularly and mostly during special occasions in their life such as birthdays, marriages, childbirth, etc.