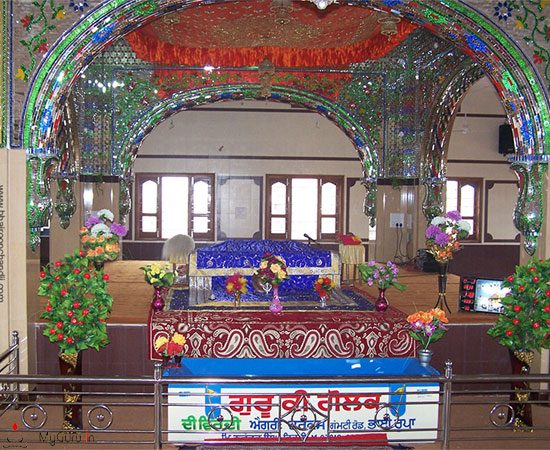 Bhai Rupa is a village in sub division Rampura Phul in district Bathinda state of the Punjab. It celebrates the name of a prominent Sikh, Bhai Rupa (Roop Chand, 1614–1709), the son of Bhai Sadhu, who laid the foundation of the village in 1631, at the instance of Guru Hargobind. Next to Bhai Rupa\'s house was built a gurdwara (Sikh community center) in Guru Hargobind\'s honour. The present Gurdwara Sahib Patshahi Chhevin, a two-storeyed domed building, marks that site inside the village. Guru ka Langar is across a narrow lane. In the same direction is the pavilion, raised recently to accommodate larger divans.
The Gurdwara, though affiliated to the Shiromani Gurdwara Prabandhak Committee, is managed by the descendants of Bhai Rupa. Close to the Gurdwara, in a private house belonging to one of the descendants of Bhai Rupa, there is preserved an old rath or chariot. It is said to have been brought from Dera Ram Rai at Dehra Dun by Bhai Gian Chand, a grandson of Bhai Rupa. According to local tradition, it once belonged to Guru Arjan and was used by his successors, Guru Hargobind and Guru Har Rai.

“Bhai”
The Guru in recognition of devotion, honoured Roop Chand with The title of \"Bhai\" (own brother) and put him in charge of the spiritual welfare of the new region of Malwa and the country south of Sutlej. With his own hands Guru Ji made Bhai Roop Chand the MASAND of the area and put on his forehead the TILAK, (saffron mark of leadership) and gave a KARCHHA, a long spoon, asking him to run LANGAR to feed the poor and the needy. This KARCHHA is a symbol of veneration for the family. The Guru also remarked that even fresh cut wood would burn like dry wood in the Langar fire. This can be seen even now at Dyalpura Bhai village at any time.