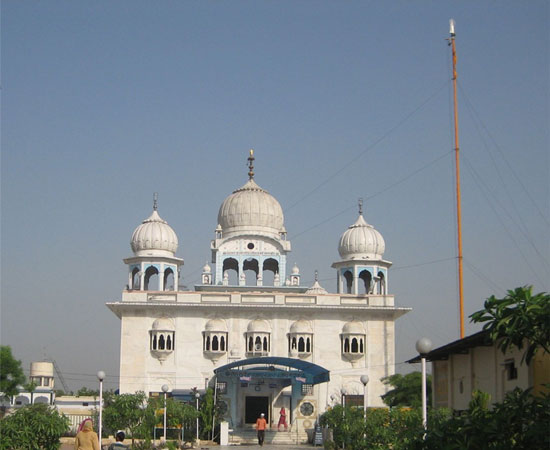 Gurdwara Manji Sahib (Alamgir Sahib) is located near the village of Alamgir, Bhogpur, Ludhiana district, Punjab, India. Guru Gobind Singh, tenth guru of the Sikhs, stayed here for a short while. Upon reaching Alamgir, Guru Gobind Singh is reported to have shot an arrow into the ground; a spring appeared from that place (now known as Tirsar). He was also presented with a horse here by a devoted follower.

Early Sikhism
Sikhism was founded in the early 16th century AD by Guru Nanak Dev. He was born in Talwandi (a village in the Punjab) in 1469 at a critical period of Indian history. The Lodi rulers lived in luxury, not caring for affairs of state or the welfare of their subjects. Their weakness and sloth allowed the Babbars to conquer them. Guru Nanak protested against the foreign domination and warned the rulers that if they ignored the people's grievances, they would receive the punishment they deserved. He challenged the fanaticism and intolerance of contemporary Muslims. During his visit to Mecca, he made the Qadis realize that God's house is everywhere, not only at the Kaaba. Guru Nanak also denounced the ritual and caste prejudices prevalent among the Hindus, demonstrating to them the fallacy of feeding Brahmins at the time of the performance of the Sharaadha. At Hardwar, he amusingly exposed the folly of offering water to the hair of ancestors.
Guru Nanak spent his first 30 years at Talwandi and Sultanpur as a householder. The next 22 years were spent as a missionary; for his final 18 years he stayed at Kartarpur with his followers, establishing dharamshalas (spiritual retreats). Wherever he went, he urged people to perform acts of charity and serve the poor and the needy. Guru Nanak preached the equality of man, treating Hindus and Muslims alike. He visited their shrines, explaining the true way of spiritual life. He opposed the distinctions of caste, referring to himself as a member of the lowest caste. Guru Nanak insisted on Grahstha (living a householder's life), believing the path of renunciation (sannyasa) a way of escapism and defeat. People must perform their worldly duties, while keeping their spirit detached from worldly things. Knowing his end was approaching, Guru Nanak tested his disciples and passed his mantle to the most worthy, Guru Angad Dev, in 1539.

Guru Gobind Singh
The tenth of the Sikh gurus, Guru Gobind Singh (1666-1708) lived during a dangerous time. His father (Guru Teg Bahadur) had sacrificed his life to protect freedom of religion for Hindus, who were being threatened with conversion or death by Muslim rulers. The abduction of women and pillage of goods were rampant, but the people were too terrorized to resist. In the midst of this situation, Guru Gobind Singh gained stature as both a holy man and a soldier: a leader of firm spiritual principles and intense devotion to God with, at the same time, fearless dedication to protecting all people from oppression and injustice. In 1699 he initiated five men from the lower castes as his Five Beloveds, blessing them with great courage and closeness to God. They became models for the Khalsa ("the order of the pure") which he established to serve on the front lines against injustice. The Khalsa were held to a strict moral and spiritual discipline and, under Guru Gobind Singh's inspiration, helped to turn the tide against Mughal oppression in India. In addition to his spiritual and military leadership Guru Gobind Singh was an intellectual, and had many poets in his court. He was inspired to write many spiritual compositions (including Jaap Sahib) but did not include them in the Sikh scripture, the Guru Granth Sahib. His writings have been collected in a separate volume, the Dasam Granth.
Guru Gobind Singh instructed his followers to regard the Guru Granth Sahib as their teacher after his death. He is revered at Gobind Sadan, for he is one of the two figures who began appearing in vision to Baba Virsa Singh when he was a boy and who continues to guide his work.