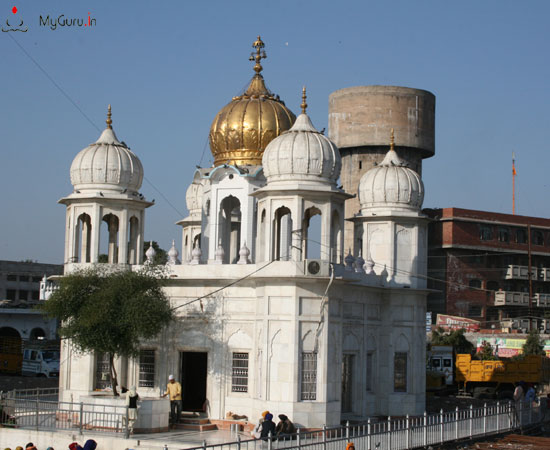 Gurudwara Shahid Ganj is located in Muktsar a flourishing town and a sub-divisional headquarter of Faridkot. It is an important pilgrimage centre. Originally the Gurdwara was called \'Khidrana Ki Dhab\'. The present name is derived from the Chali Muktas (Forty Redeemed) who sacrificed their lives here, fighting against the Mughals. The troops of Wazir Khan Nawab of Sirhind, came in pursuit of the Guru, fought with the Sikhs and were routed.

This was the last engagement of the Guru. It took place on December 29, 1705. The Guru personally cremated the martyrs. When Guru Gobind Singh along with devotees was collecting the dead bodies for cremation, he saw one of them named Mahan Singh, bleeding to death. On seeing the Guru, he made an effort to rise. The Guru at once took him in his embrace, and sat down with him. Mahan Singh tearful and exhausted, requested the great Master to destroy the Bedahwa the letter disclaiming his Guruship, submitted by the Sikhs of Majha while escaping from the fort of Anandpur Sahib. He also restored the broken link. The merciful Guru took the said document and tore it up. That is how the Great Guru showed infinite mercy towards his followers. The four Gurdwaras located at Muktsar are Shahid Ganj Sahib, Tibbi Sahib, Tambu Sahib and Darbar Sahib.

Gurdwara ShahidGanj Sahib also called Angitha Sahib commemorates the place where the last rites of the Forty Muktas, or the liberated ones, were performed. Guru Gobind Singh Ji himself performed the last rites of the forty sikhs who laid down their lives in the battle at Muktsar and named the place as ShahidGanj. A gurdwara was later constructed here and named Gurdwara ShahidGanj Sahib. The Magh Mela, held on the 12th and 13th of January is celebrated with great enthusiasm here.
Gurdwara Shahid Ganj is picturesquely set, beside a water tank. its walls are covered with paintings of the Sikh Gurus and scenes from their lives. This shrine is meeting place of millions of devotees, who gather here on the first day of the month Magha according to the Indian Calendar (January-February), to pay their homage to the martyrs.
Gurudwara Sri Shahed Ganj Sahib is situated in the Mukatsar city. Situated on the back side of Gurudwara Sri Tutigandi Sahib, it marks the place where Sri Guru Gobind Singh ji cremated 40 sikhs (40 muktas).