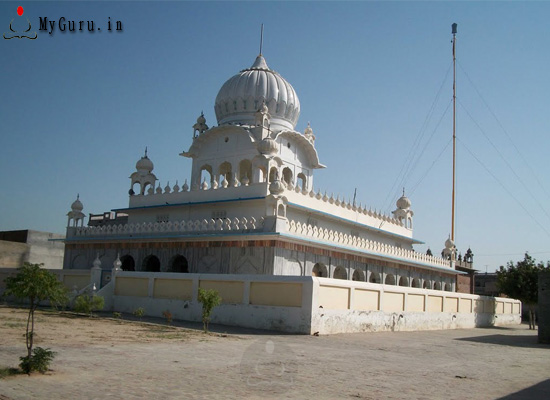 Gurudwara Bhagta Bhai Ka, this is a historycal Gurudwara in 20 km east to Jaito in Faridkot Village district of Punjab, was founded during the latter lialf of the seventeenth century by Bhai Bhagta, Grandson of Bhai Bahilo (1553-1643) a leading Sikh of the time of Guru Arjan Dev Ji. As Guru Gobind Singh Ji visited the Village in December 1705, the five sons of the founder Gurdas, Tara, Bhara, Mohra and Bhagta served him with devotion. Bhai Santokh Singh, Son Gur Pratap Suraj Granth, records a popular legend according to which Bhai Bhagta had a well sunk with the help of spirits which were still held in captivity by his sons.Guru Gobind Singh, says Bhai Santokh Singh, instructed them not to meddle with the supernatural and to set the spirits free. An old well in a corner of the compound of the historical Gurdwara Patshahi 10 at the northern end of the Village is still known as Bhutari vala Khuh (well) of the spirits. The old shrine is a small domed room with a platform in the middle of it. The new Gurdwara building on a high plinth is a 15 metre square hall with the sanctum at one end and averandah on three sides.A suite of rooms for the granthi and four rooms in a row for pilgrims and travellers complete the complex which is entered through a high gateway. The Gurdwara, endowed with agricultural lands, is managed by the Shiromani Gurdwara Parbandhak Committee through a local committee. Besides the daily services, special divans take place on the first of every Bikrami month, and on all major Sikh anniversaries. The largestattended is the annual celebration on the 1st of Magh in January.