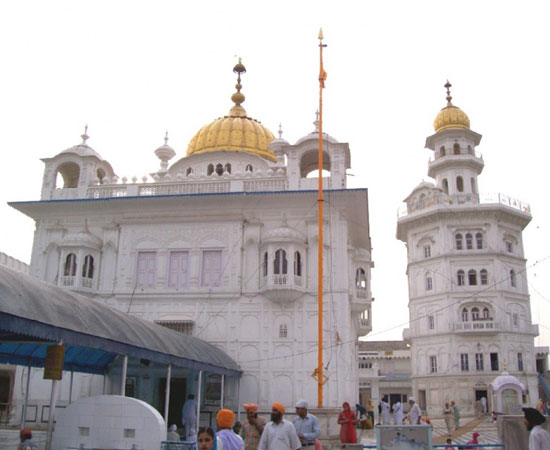 The Eighth Sikh Guru, Shri Guru Harkrishan Sahib Ji left for his heavenly abode at Delhi in 1664. He did not select his successor in person and uttered these words : "Baba Bakala" meaning that the next Guru was to be found at Village Bakala in District Amritsar. The Sikhs reached Village Bakala and found 22 members of Gurus family each claiming that he was the Guru. This created some anxiety in the Sikhs.

History
Meanwhile, A Wealthy Merchant Named Makhan Shah Lubana had his Ship carrying valuable goods caught in a severe storm at sea. Upon realizing that his life and goods were in danger, he knelt down and prayed to God and Guru Nanak Dev Ji for safety and vowed that if by the grace of the Guru he landed at the nearest Port safely, he would donate five hundred Mohurs (the gold coins) to the Guru for charitable purposes. The Ship was saved by Baba Bakala with the small finger of his hand. So Makhan Shah Lubana reached Village Bakala to pay homage to Guru Ji and fulfill his promise, but found many babas posing as Guru. He got confused and so he decided to offer only two Mohurs to everyone thinking that the real Guru would himself demand five hundred Mohurs. He placed two Mohurs before each of them, but no one recognized him. When he had visited all of the claimants, a child told him that a holy Person lives across the street whose name is Tegh Bahadur and he is the son of Sixth Sikh Guru, Shri Guru Hargobind Sahib Ji. Makhan Shah decided to pay homage to him also. When Makhan Shah entered the house, he found that Tegh Bahadur was in meditation and he quietly placed two Mohurs before him. Guru Ji opened his eyes, smiled and said," God bless you my man, Why only two Mohurs after pledging five hundred ? The Guru is never in need of anything, but a Sikh is expected to keep his pledge to the Guru ". Makhan Shah became so elated that he touched and kissed Guru Ji's feet and started shouting from the rooftop of the house : "Guru Ladho Re, Guru Ladho Re" - meaning I have found the Guru. The Sikhs rushed to the house of Guru Ji and touched his feet. A beautiful Gurdwara was constructed at that place and the Village came to be known as Baba Bakala.

Gurudwara Sri Baba Bakala Sahib is situated in the Baba Bakal town in Amritsar Distt. In the last times of Sri Guru HarKishan ji pointed about next Guru Sahib in Baba Bakala. After which many people from in Baba Bakal declared themself as next Guru. On other side Makhan Shah Lubhana a banjara trader from Jhelum district was on his ship when loaded with goods was cought in storm, resulting he prayed to God, To Guru Nanak Dev ji, for rescue and promised that he would pay 500 dinars to Guru Sahib for charity. With Grace of God he safely landed to the port and as his promise he came to Baba Bakal to pay his said amount. But reaching here he found several imposters posing them self as GuruS. He decided to offer 2 dinars to evey one posing them selves as Guru. As per his expectation non of them questioned him for the promised amount. But when He placed two dinars in front of Guru Tegh Bahadur ji, Guru Sahib said Bhai Sahib u had promised to pay 500 dinars and now ur paying only 2. Listening this Makhan Shah Lubhana ji climbed upto the roof and start whooping 'Guru Lado Re, Guru Lado Re'.(Found the Guru in Lubanki the language of the Labanas.)

Since this historic event Bakala has become a place of pilgrimage. A beautiful Gurdwara now stands at the very spot where Guru Ji used to meditate in his underground cell. This small village where Guru Ji revealed himself subsequently, came to be called Baba ­Bakala. The Gurdwara has many beautiful paintings pertaining to Sikh history. People gather in thousands on every amavas night. Besides an Annual Fair is held on Rakshabandhan day when many people throng this holy place from all over the country. This Gurdwara is situated at a distance of 45 Km East of Amritsar City on Amritsar-Gurdaspur Road in town Baba Bakala. An important event is associated with this Gurdwara. It is situated only 3 km away from Butari railway station and is well connected by roads to important towns of Punjab.