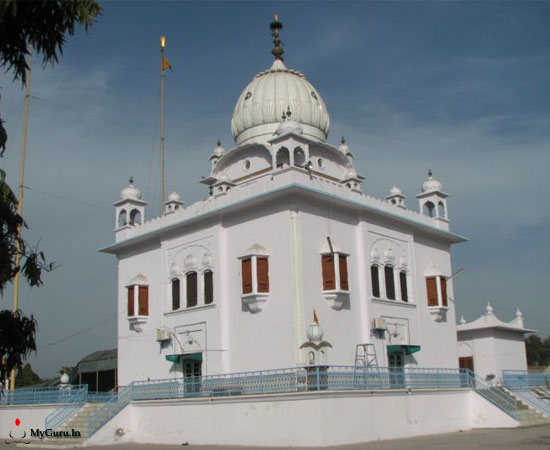 Sixth Sikh Guru, Shri Guru Hargobind Sahib Ji came to Village Mehraj in 1634 to fight against Mughal army, he selected this place to reside and put up a camp here. The battle was fought at the place where Gurdwara Gurusar, Mehraj is situated.Guru Ji stayed here for 3 Months. Legend has it that a Mughal governor in Lahore captured two horses gifted by an Afghan devotee to Guru Hargobind, the 6th Sikh Guru.

On the other side Mughals suffered heavy casualties and fled back to Lahore leaving behind the dead and wounded. Guru Sahib built a tank called Gurusar to mark the victory,\\\\\\\" said Chattar Singh, a villager. In memory of those killed in the battle a memorial, Shahid Ganj, was built opposite to the main gurudwara. Next to the memorial is a centuries old Beri\\\\\\\' tree, where Guru\\\\\\\'s Afghan horses were tied. Here devotees tie a thread on the branches of the tree for the fulfillment of their wishes.Thousands of devotees visit this place today. \\\\\\\"We have an ardent belief in this holy spot. Villagers here don\\\\\\\'t cut their hair or shave their beard because it\\\\\\\'s a symbol of Sikh\\\\\\\'s courage and bravery,\\\\\\\" said Ranjeet Kaur, a villager. \\\\\\\"The entire village organizes an annual fair in remembrance of the sacrifice of our ancestors. They have done a lot for us. All wishes are fulfilled here. We are very grateful to our ancestors. I feel very lucky to have taken birth in this village and I hope that I will be born again in this village in my next birth,\\\\\\\" said Satnam Singh, a villager. Guru Hargobind named this place Gurusar\\\\\\\' and declared it a place of pilgrimage. The old building constructed by Maharaja Hira Singh of Nabha in 1843 was replaced during the 1980s by the successors of Gurmukh Singh Sewawale. Gurudwara Gurusar Mehraj today as a memorial of the Sikh bravery.

Second Story
The Seventh Sikh Guru, Shri Guru Har Rai Ji visited this place during his journey of Malwa region. During Guru Ji\\\\\\\'s stay, Baba Kala Ji along with his nephews Baba Phul Ji and Baba Sandali Ji came to seek Guru Ji\\\\\\\'s blessings. Guru Ji blessed them by Saying that Baba Kala Ji would become a King of the States if he continues to follow Sikhism. If he or his descendants left the path of Sikhism and indulged in drug addiction, all the Kingdom would be lost. The Phulkian States of Nabha, Patiala and Jind were founded and ruled by the descendants of Baba Phul Ji.