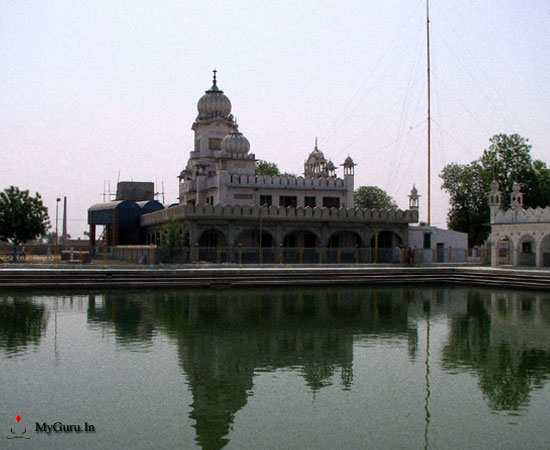 This Gurdwara is situated at a distance of 15 Km West of Moga City and 3 Km from Dagru Railway Station on Moga-Ferozepur Road in Village Darauli Bhai.

History
this is the birthplace of Baba Gurditta, the eldest son of Guru Hargobind born in 1613. At this Gurdwara Sahib, the holy event of Birthday of Baba Ji has been celebrated on Purnimah of Kartaka; the same day founder Sikh Guru Nanak Dev Ji’s birthday is being celebrated.

Baba Gurditta was a great saint and the father of Guru Har Rai as well as the elder brother of Guru Tegh Bahadur. The family of the Gurus wife Mata Damodari still lives here and are custodians of some rare personal belongings of Guru Hargobind as well as a handwritten copy of Sri Guru Granth Sahib bearing the personal seal of Guru Gobind Singh.

The Seventh Sikh Guru, Shri Guru Har Rai Ji visitesd this Village in 1653 and got constructed a Darshani Deori , a Sarovar and a Gurdwara in the memory of Guru Hargobind Sahib Ji. Guru Sahib came to Daroli Bhai many times and Sri Guru Har rai Sahib ji also came here after the Guruship.

In the Gurdwara, the chola or gown of Guruji is displayed, the devotees bow before it to pay respect to their spiritual preceptor. Besides an iron hot plate is also preserved in the Gurdwara of Daroli Bhai. It is said that Guru cooked chapatis on this hot plate, when he founded a free kitchen on Baisakhi day in this village. Another Gurdwara in village Daroli Bhai has been constructed in
memory of Mata Damodri. She expired in this village. She was the daughter of Bhai Narain Dass and married to Sri Guru Hargobind.
According to the folklore, the place where the Gurudwara was built was presented to a woman dancer named Daroli Bai, as Jagir by the Mughals.
The Gurudwara Angitha Mata Damodari Ji lies at the place where the last rites of Mata Damodari, the wife of Guru Hargobind Singh, were performed in 1631.